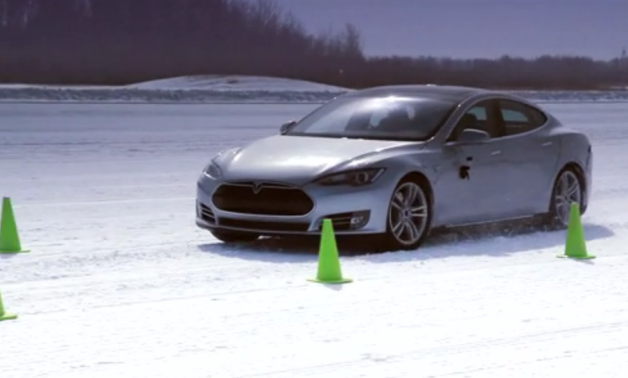 For the Tesla Model S driver in the video below, the best way to discover how his vehicle handled was taking it to the ILR Winter Driving School in Minden, Ontario.

Icy surfaces and coned courses let owner Colin Bowern explore his Tesla’s limit in total safety–not something that can always be guaranteed out on the roads.

The Model S certainly looks graceful out on the ice, even during the occasional spin–but as the interview in the video from wheels.ca shows, there’s plenty to learn about driving this particular electric vehicle in snow.

It isn’t covered in great detail, but rear-wheel drive is a factor. Traditionally, front-engined, rear-drive cars aren’t as well suited to snow due to a lack of traction over the rear axle. This shouldn’t be too much issue for the S, which is a relatively heavy vehicle anyway with plenty of weight to push down on the rear tires–but a little too much gas and the car can quickly spin, as seen in the video.

The car’s regenerative braking is discussed though. Typically, any braking movement on snow and ice should be as gentle as possible, to avoid upsetting a car’s balance.

Some electric vehicles have significant regenerative braking power. If used without care, the sudden braking effect can be akin to stomping on the brake pedal. On the rear-drive Tesla, it made the car go “squirrelly” when backing off, encouraging the rear of the car to rotate.

The good news is, it’s an issue that can be solved fairly easy–owner Bowern simply turns down the regenerative effect via the car’s touchscreen controls.

He also mentions that a dedicated winter traction control mode will be available soon from Tesla, tailoring the electric motor’s torque for better traction on snow and ice.

And, as with any vehicle, fitment of winter tires during the colder seasons will give owners of any electric vehicle a better chance of staying on the road.

But perhaps the best quote is that Bowern said driving his Model S makes him a better driver–since he naturally leaves more space between vehicles, drives more smoothly and avoids braking too hard–all techniques that help conserve energy, as well as improving winter driving.

Best way to drive an electric car on ice? Fix the nut behind the wheel…