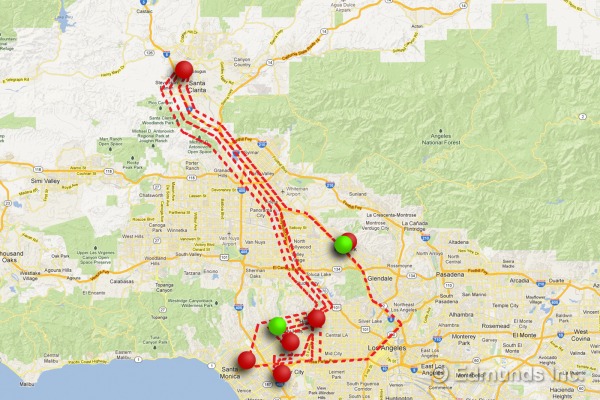 I knew that when I signed out our Tesla Model S, I had a lot of weekend traveling in front of me. I left the office with 240 miles showing on the projected range, but I was confident the Tesla wouldn’t hinder my plans.

I headed about 9 miles east to Riswick’s house for a quick little hangout. It also gave traffic a chance (albeit slim) to die down for a later destination. After shooting the breeze there, I headed home to feed the pet and pack for the night. I pointed the car north to Valencia to spend the night with the girlfriend. Without traffic, it’s a 45-minute trek. But it was Friday night, just before St. Patrick’s Day, and a sobriety checkpoint brought traffic flow through Hollywood to a crawl.

I finally got on the highway and up to speed, then more traffic. Ugh. I had traveled about 20 miles, but the range was showing that I’ve used up 30 miles worth of charge and there was still a big hill to climb. This was not how I thought it’d go.

The next afternoon I drove back home and the range was estimating 140 miles left, with actual miles coming to about 95. A couple of smaller trips to a taco stand on Sunset and the Petersen Automotive Museum kept chipping away at the range.

I wouldn’t call it range anxiety, maybe range awareness by the time Sunday morning rolled around. The L.A. Marathon kept me from making my direct route back up to Valencia, so I had to drive through Downtown to head north. Luckily, Ikea was on my weekend to-do list and they just so happened to have a charging station nearby.

With 80 miles of range showing, I parked and plugged in as we headed into Ikea in Burbank, or as I like to call it, “the place where couples go to fight.” We had no such disagreements in the store so we resorted to fabricating an argument about curtain rods to keep our sanity in the rat maze. We were out of there in only 30 minutes, which wasn’t nearly enough time to get a decent charge. It was close enough to lunchtime, so I proposed we grab a bite in the dreaded mall food court.

As we ate, I texted Magrath to get an update on the charging. He has the Tesla app and I don’t. He said I was at 105 miles of range, then asked how Burbank was. It’s creepy having someone with the ability to shadow me, so I shut the remote access feature off as soon as I got back in the car.

A quick stop in Valencia and then back to L.A. The range was down to the 50s so I had the girlfriend look up charging stations in my neighborhood. There was one just a mile away in Beverly Hills, so she hopped in her car and followed me over. Another plug-in and we left in her car for a few hours. Honestly, this last charge was probably unnecessary, but I wanted more than 25 miles of a buffer zone to get back to work Monday morning.

We picked up the Tesla just before dinner, then swung by my sister’s place a few miles south and dragged her kids to dinner in West L.A. Back up to my place to pick up out iPads and then back to my sister’s to keep the kids from burning the house down for at least a few hours. When we finally got back to CasaHashi, I had 50 miles left on the range. Good enough for the 7-mile drive to Santa Monica in the morning.

Now that I’ve thoroughly bored you with what a Takahashi weekend is like, there’s a moral to the story. The Tesla was able to handle the many destinations with ease. In L.A., there are plenty of charging stations to facilitate buzzing all over the county, and I’m sure more stations are on the way.

If I owned this car, and I didn’t have to log every time I charged-up, I’d probably charge at every available station (movie theatres, supermarkets, Home Depot, etc.) whether or not I really needed to. A few miles added here or there give me that added security and, hey, you get rockstar parking in front! Then there’s the cool factor. Once you get out of L.A.’s westside, Teslas are a rarity. I spotted a lot of people stopping to check out the car as it charged and there was no shortage of looks while on the road.

Yup. I like it. The Tesla Model S represents the first electric car that I consider aspirational. At some point, I’ll take it into the canyons to see if it’s inspirational, too.