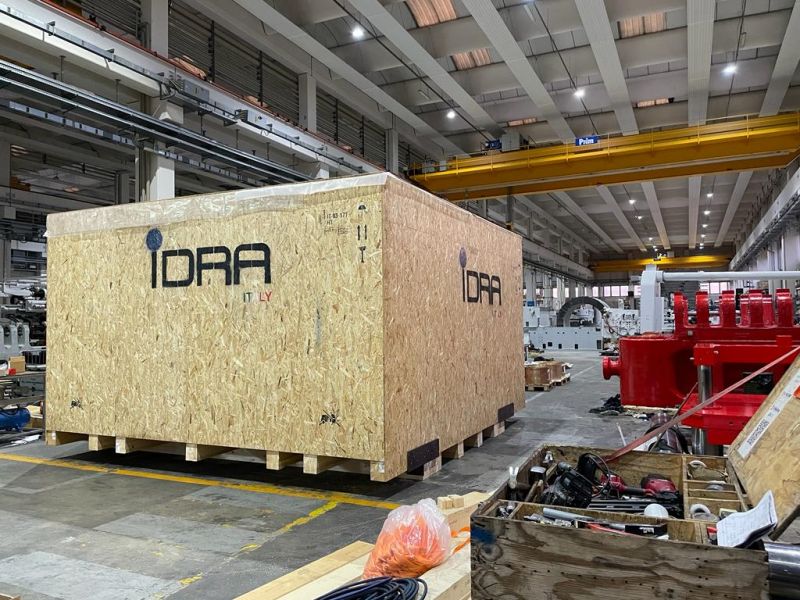 In a post on LinkedIn, IDRA Group showed the new 9000t Gigapress packaged and ready to be sent to Tesla’s Giga-Texas facility. The new press is a vital part of Tesla’s production line as it will be used for producing the body panels and numerous other metal body components expected to be used within the Tesla Cybertruck.

In the short post shared by the company’s LinkedIn page, the 9000t Giga press is seen in a shipping box, ready to be sent to Tesla’s facility:

From IDRA Group’s headquarters in Brescia, Italy, the press will have to make its way out of the Mediterranean and across the Atlantic, a voyage that usually takes roughly half a month, depending on which U.S. port the press would be headed to. However, due to the vast number of factors influencing shipping times, calculating when the press will arrive in Austin is next to impossible with the publicly available data.

The first mention of IDRA’s enormous Giga press was in the Q4 2020 Tesla earnings call; Tesla CEO Elon Musk mentioned that the upcoming Tesla Cybertruck would require a far larger press machine than existing Tesla products. IDRA was not named as the manufacturer of the now infamous press at the time, but now the relationship between the two companies has become more apparent.

Once the Giga press arrives in Austin and is assembled, hopefully without significant troubles, Tesla should be very close to production readiness for their highly anticipated pickup truck. This lines up with information released at Tesla’s most recent earnings call in which the Tesla Cybertruck was labeled as entering the “tooling phase” (preparing for production) as of the time of the call.

Further positive news for Cybertruck owners came this morning as Cybertruck bodies were spotted waiting for the upcoming press to continue their production. However, there is no telling if these vehicles are part of another batch of test vehicles, or if they are eventually headed to customers next year.

CEO Elon Musk has asserted that the Cybertruck will come as soon as next year. Unlike previous estimates provided by the CEO, the evidence seems to indicate that the company will at least be production ready by the end of the year. Though yet again, regulatory hurdles and any other technical changes that Tesla must solve before the launch determines whether the vehicle comes in early 2023 or in the final days of December next year.