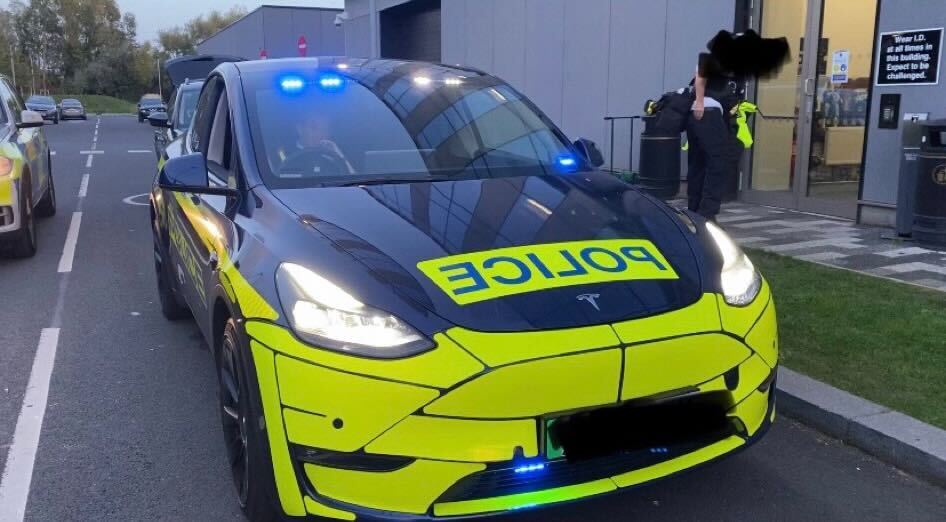 Liverpool drivers are being pulled over by a new Tesla police vehicle, LiverpoolEcho reported. The colorful navy and bright yellow Model Y was noticed on Tuesday while driving around Liverpool City Center and East Lancashire Road.

The yellow reflective wrapping and the police logo stood out as the vehicle was seen pulling over drivers. The department’s Roads Policing Unite explained that they had the Model Y “on a test.” A spokesperson for the department confirmed with LiverpoolEcho that the vehicle is on a trial basis to access it for different roles.

The unit shared a post on Twitter about the new police vehicle noting that the head-turning Model Y was on a test.

“We currently have this cool looking Tesla on test. It’s certainly been a head turner so far. How many top up charges do you think we will need in a shift?”

Chief Officer for Merseyside Police Special Constabulary responded to the tweet stating that the on-site chargers at Rose Hill were slow and would take 20 hours to charge from the flat. He said that he hoped the ones at OCC are quicker. The department didn’t elaborate on how long it plans to test the vehicle or whether or not it will become a permanent addition to its fleet.

We currently have this cool looking Tesla on test. It’s certainly been a head turner so far. How many top up charges do you think we will need in a shift? 😬 #MRPU #SYN1 pic.twitter.com/UEaetX6Vkm

Police forces across the U.S. and other parts of the world are embracing EVs and Tesla vehicles as options for their fleets. The Bargersville Police Department in Indiana was one of the first police departments to add a Tesla Model 3 to its fleet and has since added more EVs.