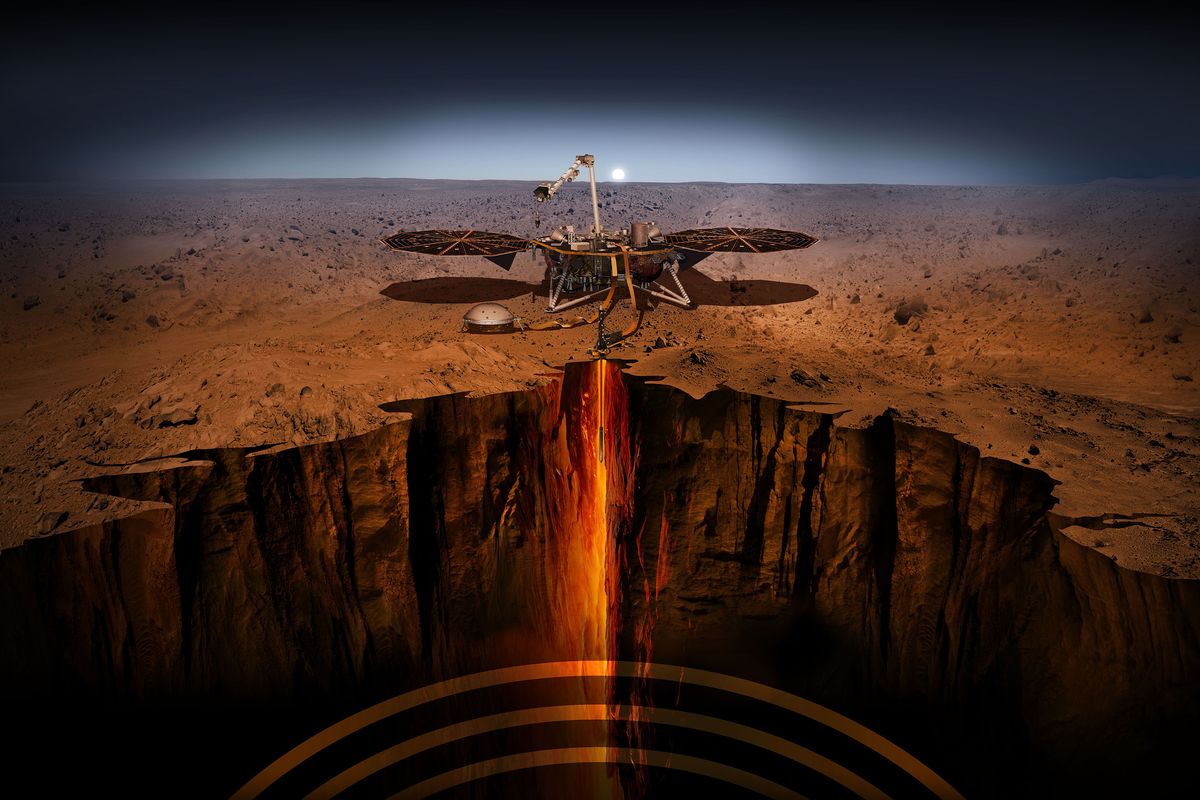 NASA’s InSight lander has spent the last year listening to the deep rumble of the red planet’s interior. And its first batch of data is in. The stationary lander found out that Mars’ magnetic field is constantly changing, but that’s not all. InSight also delivered the first direct evidence of marsquakes.

Here on Earth, geologists use seismometers to listen to the planet’s inner stirrings. InSight is the first robotic explorer to carry a seismometer to another planet. And it’s shown that Mars is not the dead, lifeless world it appears to be — the red planet is actually geologically active.

“This is the first mission focused on taking direct geophysical measurements of any planet besides Earth, and it’s given us our first real understanding of Mars’ interior structure and geological processes,” geologist Nicholas Schmerr of the University of Maryland said in a news release.

“These data are helping us understand how the planet works, its rate of seismicity, how active it is and where it’s active.”

InSight’s seismometer, an ultra-sensitive instrument provided by the French space agency, will shed some light on the red planet’s inner workings over the course of its mission. Officially dubbed the Seismic Experiment for Interior Structure, the SEIS instrument detected its first Martian rumblings last April.

Ever since, scientists were eager to get their hands on the full spectrum of data, to better understand just how active our celestial neighbor might be.

These first Martian murmurs were so faint, they’d probably go unnoticed by anyone on the surface. Roughly equivalent to about a 2 or 2.5 quake here on Earth, to InSight’s science team, these were incredibly exciting and just the beginning of a new era of Mars science.

Seismic waves can tell us a lot about a planetary body. They act like an ultrasound, allowing us to “peer” below the surface and determine the planet’s composition.

Here on Earth, seismic waves are caused by the movement of tectonic plates gliding over the planet’s mantle. When the plates jockey for position, stress builds up until it reaches a critical point, and that’s when an earthquake is triggered. But not every planetary body has these types of plates. The moon, for instance, has seismic activity that’s caused by a different method.

After a planetary body is formed, it has a primordial heat source that over time cools off. In the case of a rocky body, like the moon, that lacks any sort of tectonic plate movement, the seismic activity is caused by internal cooling. As the satellite cools, it ever so slightly shrinks, sending minute seismic waves propagating through its interior. The Apollo program recorded examples of this and InSight has now shown that Mars has similar activity.

Seismic data was collected over the course of 235 Martian days. 174 marsquakes were recorded during that time; 150 of those were shown to be similar to the Apollo program’s findings on the moon. Three of the other 24 produced wave patterns similar to quakes experienced here on Earth as a result of tectonic plate movement.

But as far as we know, Mars does not have tectonic plates. The science team was able to pinpoint the origin of three of the quakes: a fractured piece of land called Cerberus Fossae. Here the ground is cracked and fractured suggesting it was once tectonically or volcanically active. (Sometime within the last 10 million years, something pulled the ground apart here.)

Scientists are hoping that as more data comes in, they will be able to piece together what is causing Mars to tremble, and learn more about the red planet’s interior in the process.