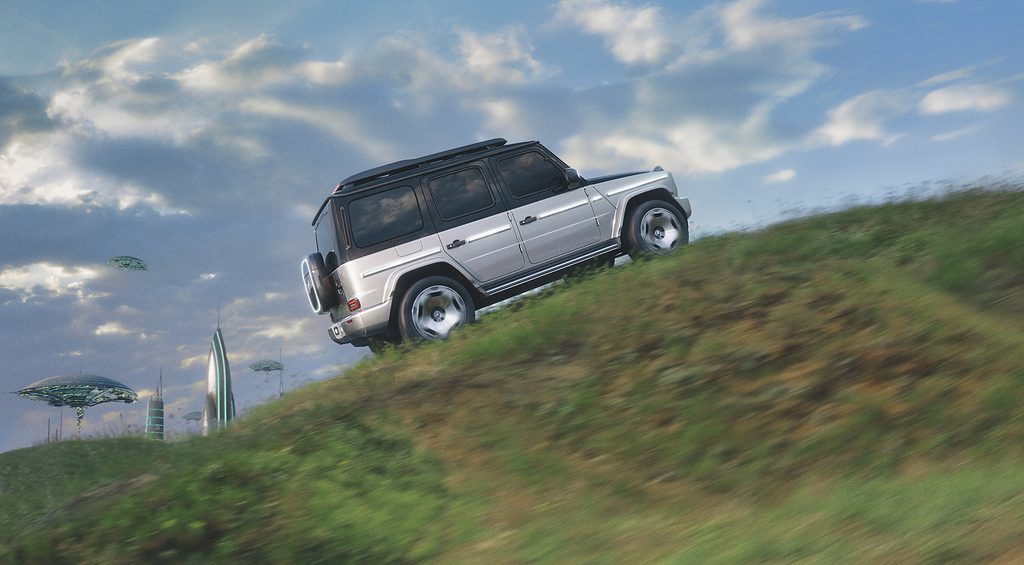 The upcoming Mercedes EQG, the electric variant of the historic G-Class SUV, has been spotted completing winter testing in Germany.

The Mercedes G Class SUV is one of the oldest model names in the automotive industry, and despite its long heritage, it has changed in design and purpose very little. It remains a boxy offroading SUV that offers the driver and passengers unparalleled comfort. As Mercedes electrifies its lineup, the electrified version of the vehicle, the EQG, has been seen testing ahead of a possible launch this year or next.

The Mercedes EQG was spotted in Germany by the car spotting Instagram, @race356:

The two pictures show a surprisingly uncamouflaged electric G class, identified not only by its electric circuit-themed wrap, but by its lack of tailpipe and covered grill.

The concept/prototype version of the Mercedes EQG was first revealed in 2021 when the chief designer, Emmerich Schiller, outlined some basic but intriguing technical specifications of the vehicle. Mr. Schiller stated that the vehicle would use a quad-motor all-wheel-drive system paired with a unique ladder frame, an integrated battery, and an intricate 2-speed “transfer case” (for lack of a better term). One central point was made clear by these upgrades; the electric G wagon would not lose its offroading capabilities as it changed its drivetrain.

Other specifications, including pricing, electric range, and more, have not yet been made public by Mercedes, but they may be predicted with reasonable estimates.

The upcoming electric Mercedes should obviously not be expected to come in at a budget-friendly starting price. The gas version of the Mercedes G Class starts at an eye-watering $139,900. Considering the price of other electric models has closely mimicked similar Mercedes gas offerings, it would be surprising to see the vehicle start for less than $140,000.

Considering the range of options and trims that Mercedes makes available, including AMG variants, a Mercedes EQG could be priced from the low $140,000 range to close to $200,000 for a top-trim AMG version.

If Mercedes used parts from the EQS SUV, the EQG would be fitted with a 107.8kWh battery. This battery, which gives the EQS SUV a range of 305 miles, would likely be strained in the larger, more powerful, and far less aerodynamic EQG. Hence, even if the EQG saw a modest 20% drop in efficiency compared to the EQS SUV, it would only be capable of a range between 200 and 250 miles.

Regarding its output numbers, considering the vehicle uses four motors, the EQG could produce between 1000 and 1400 cumulative horsepower and between 1200 and 1600 pound-feet of torque if it used motors found within the EQS SUV.

Despite the German luxury brand’s numerous videos on the EQG concept, the company has not yet clarified when the vehicle will be launched. Yet with the company completing testing on what is no longer a first-gen prototype vehicle, many anticipate that the vehicle could be revealed in production form later this year or next.

Luckily, due to America’s never-ending demand for SUVs over the past few years, Mercedes is more incentivized than ever to release the vehicle as quickly as possible. Hopefully, this demand, compounded with the company’s drive towards electrification, will mean the historic G wagon becomes electric sooner rather than later.