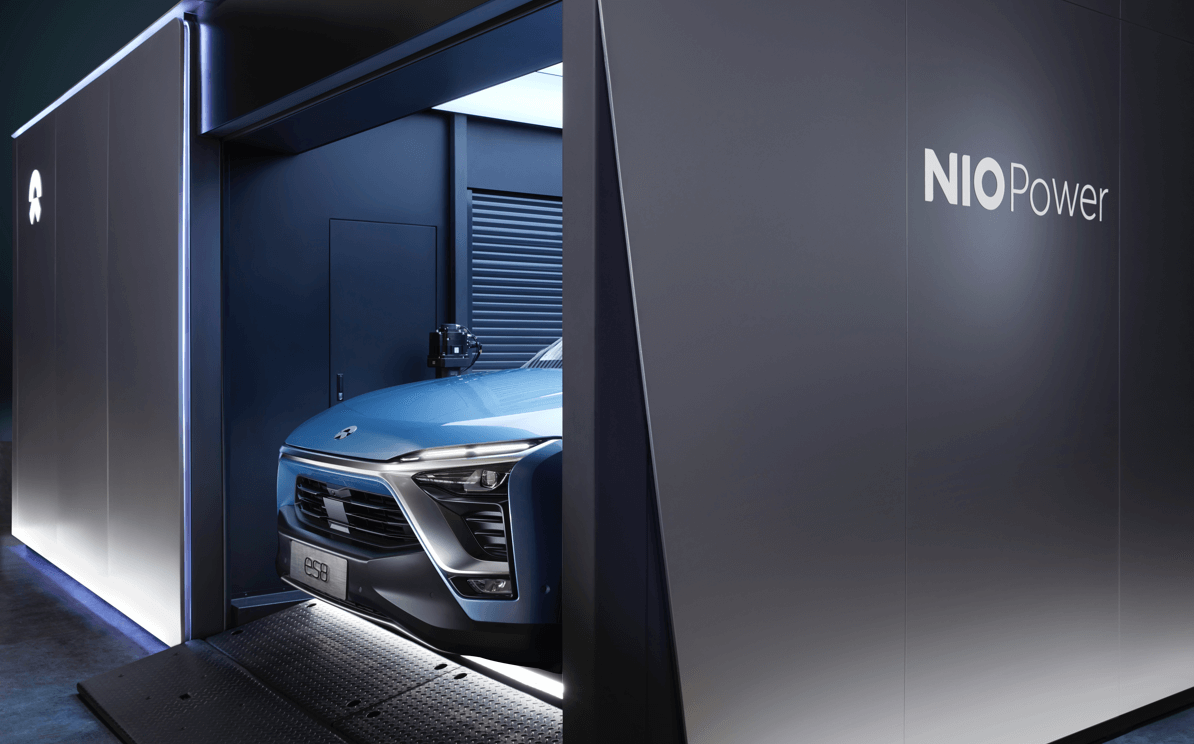 NIO continues to push forward on battery swapping technology that’s aimed at getting its electric cars fueled up in less time than it takes to pump gasoline into a standard internal combustion engine vehicle. NIO owners can use the company’s compact battery swapping stations located in parking lots and other locations for a delay-free power supply for their vehicles. Drivers enter a swap station and wait while an autonomous robot removes a vehicle’s drained battery and replaces it with a completely charged one. With such an option available for quick access to EV power, NIO clearly intends to embrace customer convenience as part of its plan to win over its target customer base.

According to NIO’s IPO last year, this battery exchange service – called “Power Swap” – has been rolled out in nine cities around China, including Beijing and Shanghai. Plans call for 40 to 80 swap stations in place by the end of December. The company announced the completion of its battery swap network along the Chinese G2 Expressway (from Beijing to Shanghai) in early January this year.

NIO is offering a subscription model that’s priced at $200 per month wherein customers can utilize company-provided batteries rather than owning the actual battery that’s attached to their vehicle. If a customer doesn’t own the battery, swapping it out is a mere formality rather than a question of whether their replacement battery is the same quality as the one given up after purchase.

Despite its advantages, NIO’s battery swap plan has given investors pause, and for good reason. This style of recharging concept has gained some closet skeletons in the recent past, particularly via Better Place, the Israeli-based electric car company that gained a pie-in-the-sky reputation trying to become what Tesla ultimately became but went bankrupt instead. Better Place was known for its swap stations, thus wrapping the entire autonomous recharging solution in with Better Place’s downfall, fair or not. The current environment for EVs might change investors’ tune in the near future, though, especially given NIO’s native country’s push for companies just like theirs to exist.

NIO and other electric companies have a unique position with the Chinese government that may help them succeed where others have struggled or failed. Namely, government-driven subsidies and charging infrastructure investments have been offered to China’s customers to encourage the speedy production and expansion of electric car presence. This direct support could be key to NIO’s ability to scale up and profit from its battery swapping business. That, and Tesla’s incredible impact on the demand for electric vehicles and proven ability to implement battery charging networks to ease range anxiety deserves a significant effort.

Tesla has given its own attempt at battery swapping a shot after first demonstrating the capability shortly after Better Place closed up shop. A battery swapping station opened up near the Harris Ranch Supercharger station in Coalinga, CA with appointments available beginning in 2014 as a pilot program. The station appeared to be closed as of 2016, however, and Tesla has only shown an interest in offering the service again via a 2017 patent application for a battery swapping technology after investing its primary resources into developing its Supercharger network. Tesla’s application received a Notice of Allowance for this application from the US Patent and Trademark Office on February 6, 2019, meaning the company has continued to pursue the technology rights and the full patent should issue soon.

NIO opened its doors in 2014 and currently offers two all-electric production vehicles: the ES6 and ES8, both SUVs. Dubbed the “Tesla of China”, the startup successfully delivered 10,000 made-to-order vehicles last year and has made overtaking Tesla in China one of its major goals. Significant investments have been made into branding NIO as a lifestyle company, including exclusive owner clubs and social network opportunities along with customer convenience offerings like the battery swap stations, mobile power vans, and app-based services similar to those offered by Tesla. It remains to be seen whether NIO can successfully revive the battery swap concept, but considering the brave new world of EVs that did not exist a mere few years ago, their hopes certainly don’t seem to be too far fetched.

Watch the below video to see NIO’s battery swapping tech in action: