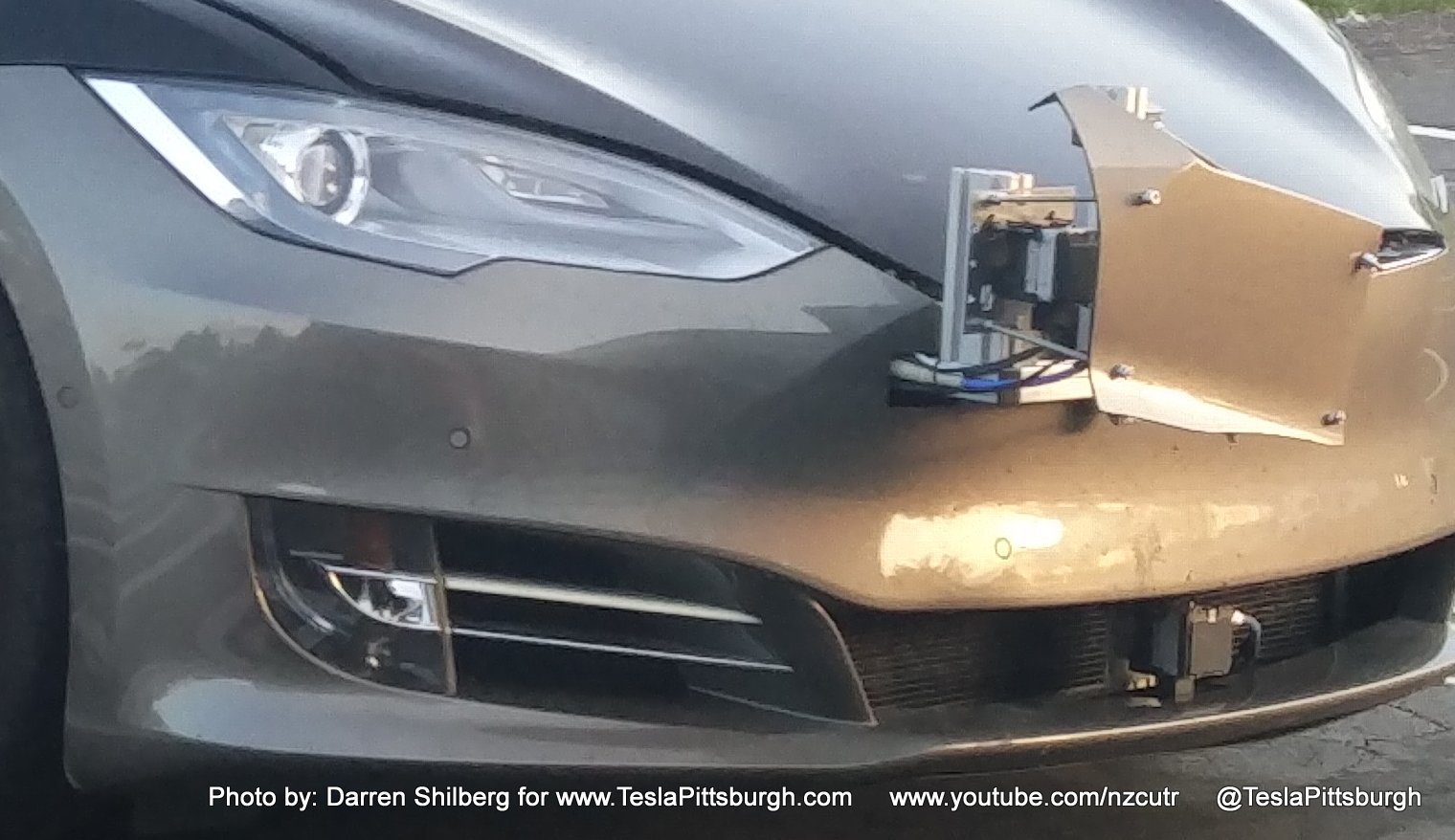 Following the refresh of the Model S last month, there has been much speculation about whether or not “that was it” or if Tesla still has some arrows in its quiver. The mere suggestion that more “cowbells” could be coming has put prospective owners a-quivering too, as the on-going debate continues as to when is the best time to buy? This sighting of what appears to be a test mule in Pennsylvania won’t help those still on the fence. Spotted by Darren Schilberg at the Cranberry Supercharger north of Pittsburgh, the two-toned Model S appears to be a platform for the next generation Autopilot 2.0. The underlying car is a pre-refresh Model S, as distinguished by its plastic rocker panels and headlights. The new Model S fascia has been substituted on the nose, but with concessions to the older car’s Autopilot sensors by way of cut-outs in the bumper. Standing proud on a bracket is what looks to be a duplicate piece of fascia. The contours of this extra piece are hard to match exactly to those on the refreshed S bumper but given the additional height, it seems plausible that it could be filling in for the higher Model X bumper. Behind that additional fascia piece is another sensor module of some kind. On the refreshed Model S, the forward facing radar is internal to the fascia, but here again the radar of the older test car is clearly visible still lurking in the lower air intake area.  The presence of so many sensors– seemingly overlapping– on the front of this Model S suggests Tesla could be trying to accelerate their development time on Autopilot 2.0.  The original Autopilot system is clearly present and wired in (the cabling for the radar is visible and there are holes for the ultrasonic sensors in the fascia). The refreshed Model S fascia wasn’t put on for fun as the non-matching paint is hardly stealthy. It seems likely the refresh’s sensor suite is still perched behind the updated fascia– and perhaps even replaced with a new sensor suite to test its compatibility with the new S fascia. The elevated chunk of fascia appears to be at the right ride height for a Model X… which then raises the bar significantly.

Could it be that Tesla’s engineers are able to run the “legacy” Autopilot, current Model S and X Autopilot and also be testing Autopilot 2.0 sensors concurrently?

The ability to compare data from multiple iterations and generations of sensors under identical test conditions would be highly advantageous to say the least. Ah, but I’ve saved the best for last!  Look closely at and through that windshield from the first picture in this article. There are more cameras there than in the White House Press Room. It’s hard to make out what is going through all those reflections, but there are a lot of lenses there. The current Autopilot camera is in its normal place. Below it is a platform bracket of some kind though it’s impossible to see if anything is on top of it. Clearly visible to the passenger’s side, in front of the sun visor, is a silver camera lens. On the driver’s side there is a suction cup mount with a dual-lens camera of some kind– it looks like a pair of small binoculars. Slung under the bracket is a very large centered lens that looks a lot like a police car’s dashcam. Finally, on the driver’s side of the large lens is a smaller unit that looks like it’s facing to the side of the road. None of those additional cameras are part of the current Autopilot sensor suite for either the S or the X.

Potentially what we have then, is a single vehicle that can serve as an ideal platform for testing Autopilot’s past, present and future. Not just the sensors and cameras– but new versions of firmware too.  Think of all the vetting that has to be done for releasing new firmware across different generations of Model S, plus the X. Here could be a real-time, toggle-switch equipped way to measure the system’s parameters under identical road/weather/light conditions.

So it could “just” be Autopilot 2.0, but who knows when it would be in production, so do you decide to buy now? Or maybe “coming soon” is just a few months’ wait from now?

Or it could be something much, much more… It could be “Part 2” of the Model 3 reveal.

We’re deep in speculation already, so what do you think we’re looking at?