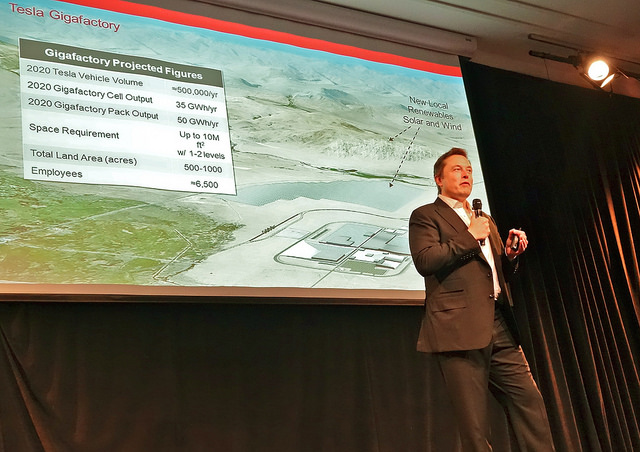 During last week’s earnings conference call, JB Straubel, CTO of Tesla Motors remarked that the Gigafactory battery plant is ahead of schedule.

“We’re a bit ahead of schedule in the Gigafactory than what we previously communicated. We felt it was important to go as fast as we possibly could and start some production operations in 2016,” says Straubel.

That’s impressive with such a large factory footprint and its many moving parts. “Basically, the Gigafactory pilot plant is as big as the next biggest or pretty close at least, I think, to any other lithium-ion factory out there,” Musk said during last week’s earnings conference call.

Part of the interest in the Gigafactory plant has been the promise of renewable energy to run the plant operations or a “net energy zero” battery plant. And according to a post on Engineering.com, this plant could actually have excess renewable energy for its daily operations in a relatively quick amount of time.

The article, entitled, Can Tesla Power Its Gigafactory with Renewables Alone?, states “the factory would consume 2,400 MWh per day. For comparison, that’s the equivalent electricity consumption of about 80,000 homes.”

So how does Tesla Motor’s Gigafactory plant produce enough energy to match 80,000 homes on per day basis? The post provides conservative calculations for the main ingredients of power at the lithium battery plant: Solar, Wind and Geothermal.

The one caveat for me is the geothermal component. Nevada is a huge geothermal source, but whether it’s economical for Tesla Motors to drill and build a plant is another issue. However, the company could buy geothermal from a geothermal power producer in Nevada and attain its stated goal of a “net energy zero” factory. (For more on Nevada’s geothermal, click here)

The solar and wind production components seem very doable as the article points to 850 mWh of rooftop energy per day and 1,836 mWh per day from 85  wind turbines.

For the geothermal component, one plant could produce up to 240 mWh per day for a plant total of more than 2,900 mWh of renewable electricity each day, 20 percent more than it needs each day, according to Engineering.com.

To put the cherry on the sundae, the article points to Tesla’s well-known battery storage ambitions to smooth out its electricity power generation from these inconsistent power sources, wind and solar. Again, the number one aim of this plant is to produce enough batteries for 500,000 electric cars by 2020.

So check out the article and its calculations, fascinating read on this truly unique lithium ion battery plant and its lofty ambitions.