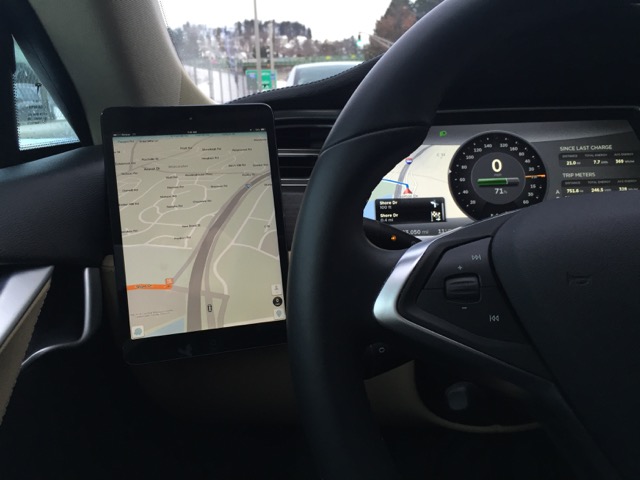 Generally speaking I’m a minimalist so I don’t have a lot of extra devices, cables and miscellaneous items laying around my Tesla Model S. I put a lot of thought into whether a component will serve a useful purpose but also whether it looks in place within the car before committing to it. I went through this very same exercise before deciding on the dual channel Tesla dash cam. This time around I’m installing a discreet and removable car mount that will secure my electronic devices to the front dash of my Model S.

Why get a car mount?

As mentioned, a car mount is a great way to attach your personal electronic device to the vehicle. Having a car mount goes beyond just having a convenient way to secure my devices. I was looking for a solution that would allow me to utilize my favorite apps during my driving experiences. A car mount allowed me to achieve the following:

I made a list of requirements that my car mount needed to satisfy and they’re as follows:

My research turned me to a simple car mount that satisfied all of my criteria – the Nite Ize ‘Steelie’ available on Amazon for approximately $20. The Steelie looks classy and is made up of a magnetic steel ball attachment and receptacle. Each piece comes with a 3M VHB foam adhesive backing which is extremely sticky.

For the install, one piece goes on your dash and the other attaches to your device. The attachment on your device is fairly small but it definitely adds a little more thickness and edge to your device. You can attach the piece directly to your device or to its case, but once it’s on, it’s going to stay on for a very long time.

I have a spare iPad Mini with 3G that I keep in my Model S at all times. I use it for reading and killing time while waiting at Supercharger stops or when waiting to pick up the kid. I can use it in the car or carry it with me into a coffee shop since it’s always online. The iPad is also much faster than the built-in Tesla browser plus it has the added benefit of being apply to play videos.

All those reasons made my iPad tablet the perfect companion for the Steelie car mount. On the left side of the dash I installed the Steelie metal ball. This is essentially a very powerful magnet that Steelie guarantees will not affect your electronic device. Take extra care when selecting a mounting point for the Steelie as you’ll want to keep it in a spot that does not interfere with the airbags, but also positioned in a way that the iPad can be easily viewed.

I found that by placing the ball on the left side of the dash display in line with the leftmost edge of the vent (where the surface is flat) the Steelie looked the most natural. My iPad Mini sits at just the right height in this position and can be angled slightly towards me yet it won’t interfere with the door or block ventilation.

One of the great things about the Steelie is how fast you can attach and detach devices. Just grab the device and place it on the ball. Everything lines up easily and instantly grabs hold because of the strong magnets. To detach just give it a slight tug. Your device won’t come off during hard launches or turns but it will come off easily when you tug on it. Another great feature is that you can angle and move your device while its attached giving you quite a bit of flexibility in positioning. This has been a great solution for me.

The Steelie can be easily removed by sliding dental floss between the Steelie and the dash. This will cut through the 3M adhesive used to attach the car mount. I tried this and can confirm that I was successful at removing both. You’re not supposed to re-use the same adhesive after detaching (they have replacement adhesive for this) but for a one-time test it was fine for me. I keep my iPad plugged into power and tucked along the right side of the driver’s seat. I have a black charge cable and a black magnetic Apple “smart cover” that protects it from getting scratched but also makes it blend into the black trim of the seats making it near invisible.

It’s easily accessible when needed. Unplug the charge cable, flip off the magnetic smart cover and slap it on the Steelie car mount and I’m ready to go. I generally don’t plug the the iPad into a power source when it’s mounted on the Steelie but I could easily do so by using my Model S 12V adapter since the plug is right below the Steelie’s mounting location.

If I want to hear about upcoming alerts without seeing it on the iPad’s screen, then I simply turn on the device but leave it tucked away. I prefer to have the alerts play from the device’s speaker so it doesn’t interfere with my music.

This solution can obviously be used with any car and is not specific to the Model S. Abstract Ocean is offering this same product on their Tesla-specific site. They have a great mix of Tesla Model S specific accessories such as this center touchscreen protector. Their price is on par with Amazon’s but you may want to check the difference in shipping charges between each vendor.