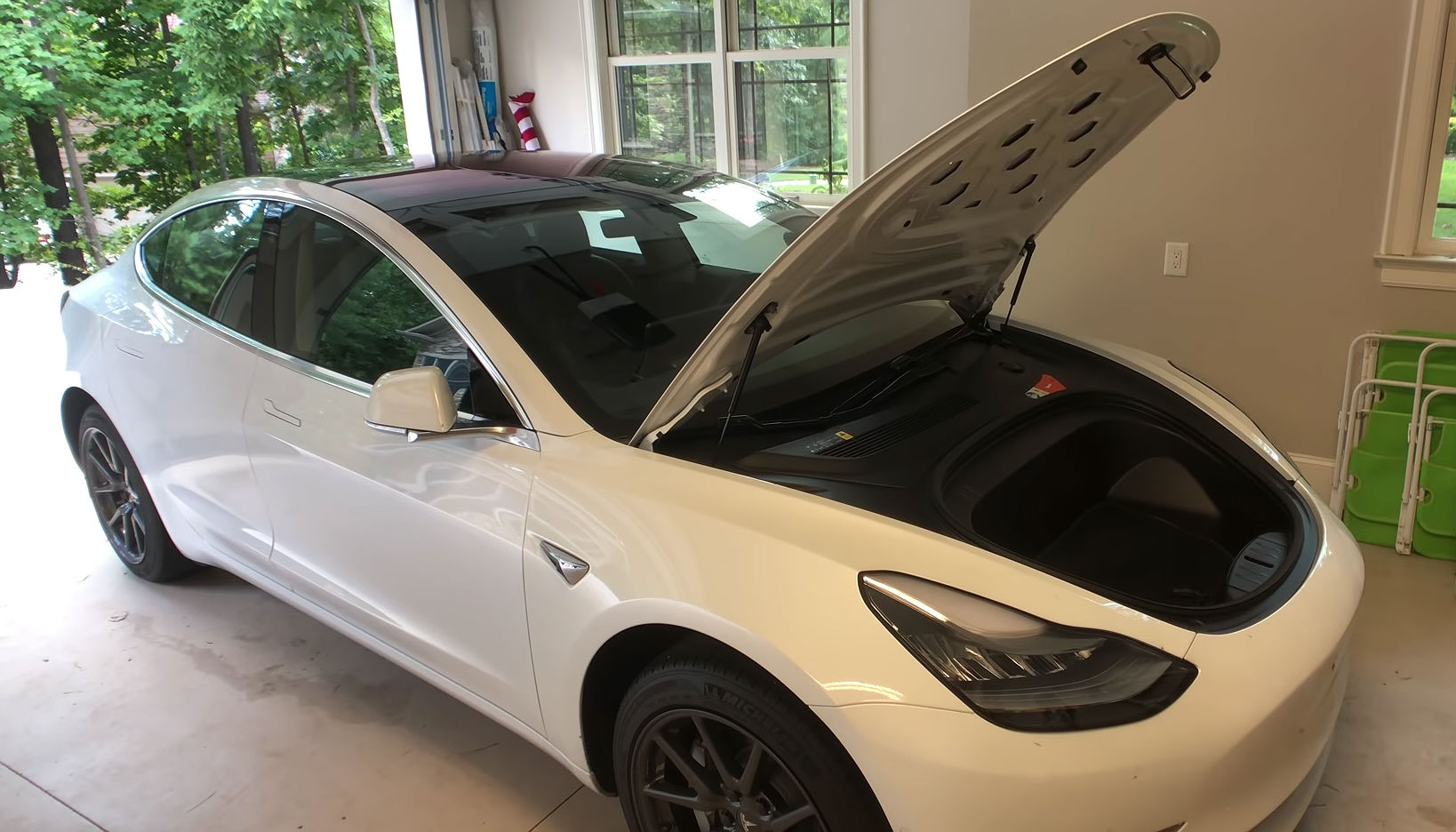 Model 3 owner and enthusiast Brian Jenkins, who constructed a DIY Urban Supercharger for his garage and modded his Model 3’s dashboard by staining its wood panel, recently shared a video of his latest project in his i1Tesla YouTube channel. Brian noted that he wanted to find a solution that would allow his Model 3’s hood to lift automatically when it is opened from the Tesla app or the electric car’s 15″ touchscreen.

The Model 3 owner noted that he tried several solutions that ultimately didn’t work, such as adding stronger springs to the electric car’s stock gas struts. Eventually, the DIY enthusiast found stronger gas spring struts on Amazon that just happens to fit his Model 3 perfectly. Ironically, the gas spring struts are parts designed for the 2005-2010 Jeep Grand Cherokee — a vehicle that is pretty much the antithesis of the all-electric Model 3. The aftermarket struts are quite affordable too, with some costing as little as $12 per pair.

Installing the stronger gas struts is quite simple. Replacing the Model 3’s stock struts just requires prying a retaining clip and popping the stock strut off. The new gas struts are installed by popping them into the slots left by the Model 3’s original parts. Brian does state that new gas spring struts have a lot of pressure on them when they’re freshly installed. Thus, when closing the modded frunk for the first time, it would be a good idea to close the hood carefully.

Interestingly, the Model 3 owner noted that his electric car’s hood ended up being aligned a little bit better with the front fender of his vehicle after he installed the stronger struts. Brian noted that his Model 3’s hood used to be slightly lower than the front fender, but after the mod was complete, the two panels were pretty much perfectly flushed.

Considering that the Model 3 has a button inside the frunk that unlocks the hood of the vehicle, there were some reservations from Brian’s viewers about the safety of the mod. After all, having the Model 3’s hood open all the way while the car is cruising on the road would be quite dangerous. As shown in a brief experiment by the DIY enthusiast in a later video, such a scenario will be unlikely, as the Model 3 prevents the hood from opening fully if it gets unlocked from the frunk when the car is moving.

Since Tesla attained its long-elusive target of building 5,000 Model 3 per week, the company is now offering two new variants of the vehicle to reservation holders — the Model 3 Dual Motor AWD and the Model 3 Performance. In a recent announcement, Tesla also confirmed that the $35,000 Standard trim Model 3 would get a Dual Motor AWD option when it gets released.

Watch Brian’s installation of his DIY Model 3 automatic frunk in the video below.

And here’s the DIY enthusiast’s experiment to see if the Model 3’s hood will open fully while the electric car is moving.