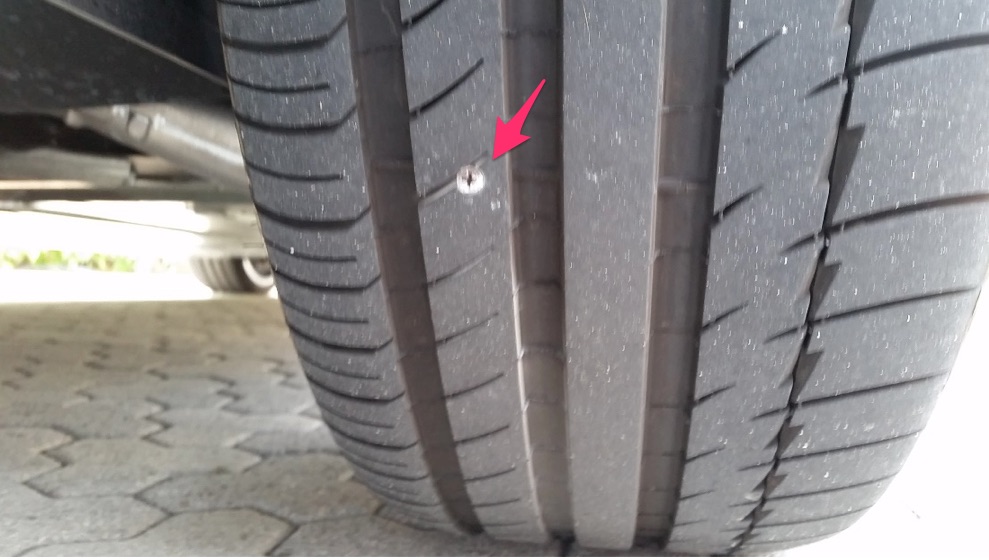 I noticed a message appear in my Tesla P85+ stating that the tire pressure was low and to pull over. Since I was already at home, I rolled up to the garage and began inspecting my tire pressure only to find that one of the rear tires was at a mere 20 psi. The recommended tire pressure for my set up is 38 psi up front and 40 psi in the rear.

I ran my hand around the flat tire and felt something metal but it was in a location not easily seen.  I marked the spot on the side wall with a pencil and backed up to the garage until I could clearly see the problem – a screw had lodged itself into the tire. Luckily it was inside the first thread which from my experience means that you CAN plug it. I did this another time on my Porsche Cayenne after the dealer told me that if it’s inside the first thread, even in racing situations, they plug them. I plugged my Porsche about a year ago and ironically it’s the most stable tire pressure of all my tires on that car so I was confident that I can do the same with my Model S. Of course before lifting the car up I put it into jack mode and raised the air suspension to the highest position to enable ease of access. I also chocked the three other wheels with a couple of wooden and one metal chock so it wouldn’t go anywhere.

WHERE TO BUY: Wheel Chocks with Quick Release Tug Rope

The Tesla doesn’t have a jack or spare tire so I went to my Porsche and got out the hand crank jack which fit perfectly in the jack point for that wheel. I raised the car until the flat tire was off the ground. Jack from Porsche Cayenne (4,800 lbs vehicle) used in raising the Tesla Model S which shares a similar weight. Any 2 1/2 ton jack can be used.

After unscrewing the screw from the tire, I put some soapy water on the hole to make sure that this was in fact the culprit. Sure enough I saw bubbles and confirmed that this was the source of the tire leak. The next step involved getting out my tire plug kit. I have a quality tire plugging kit by Safety Seal which contains the plugging tool and a separate tool designed for steel belted radials. I put the separating tool in the hole and pushed it in to separate the steel but to also make room for the plug itself.

Editor’s note: Tire plugs will seal larger punctures where as smaller holes can be repaired through a spray sealant similar to what Tesla Motors offers through their tire repair kit.

Driving around after the tire’s repaired will allow the steel bands to come back together and compress the plug into place.   Here we see the separating tool in the tire. The next step involved taking out a stick plug and inserting it in the plug tool.

Instructions come with the Safety Seal on how to do this.  A little grease on the tip to help it slide in. When you remove the separating tool, do it carefully and note the angle that it goes in. If you follow that with the inserting tool, it will go in relatively easily.

Plug inserted in insertion tool with both sides approximately equal. The kit comes with a single blade razor to cut off the excess. When you’re done it looks like so: Final steps are to lower the car and remove the jack, then remove the blocks (might need to back up the car a few inches first to free them), and that’s it. So far so good with this tire. I don’t expect any problems.