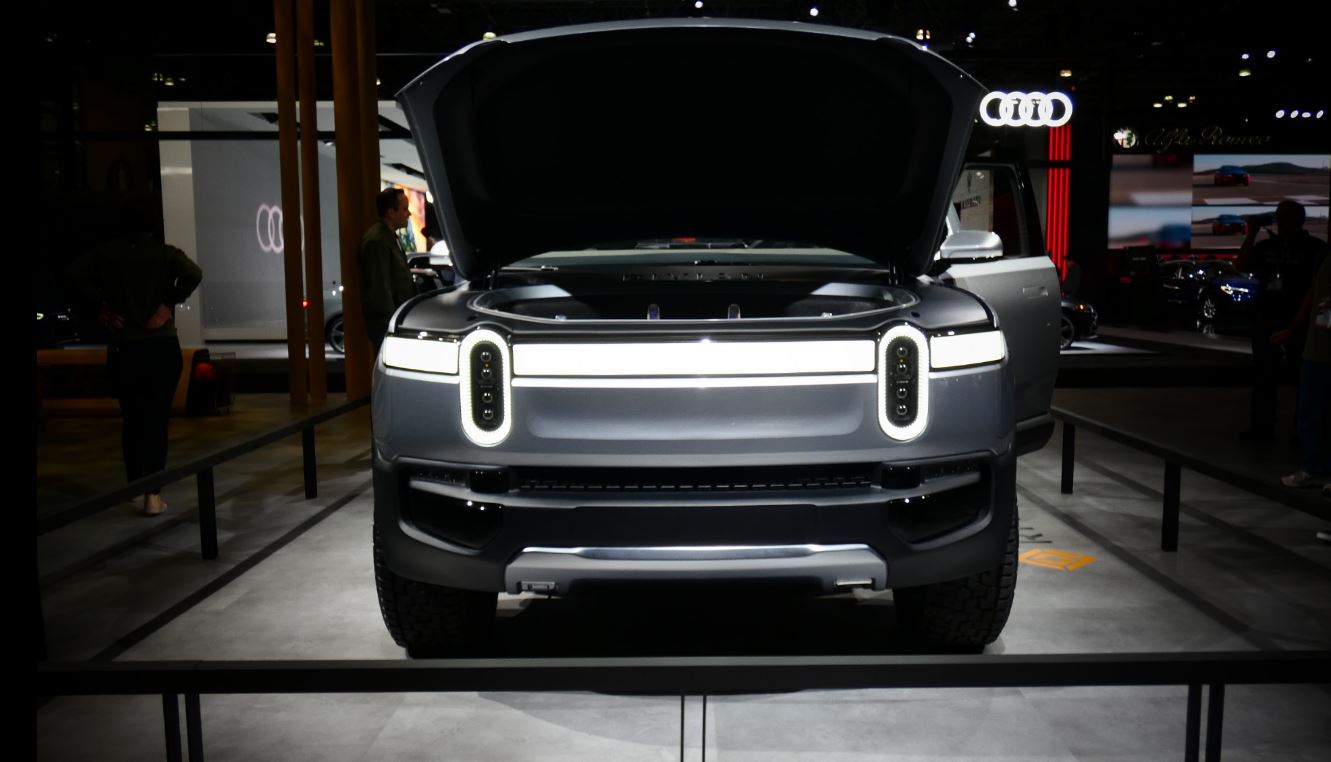 Rivian has been on a promotional whirlwind since the company came out of the shadows last year at the 2018 LA Auto Show, and with it, the all-electric adventure company’s attendance at the New York International Auto Show this year has now generated quite a few more vehicle detail revelations from interviews posted online by show attendees.

Thanks for the warm welcome, #NY! See you again soon. pic.twitter.com/RNTHh5bYy3

Brian Gase, Rivian’s Chief Engineer of Special Projects, appeared in a number of videos describing features of the R1T truck and R1S SUV that are unique and otherwise not commonly known about the vehicles.

First, the number of storage compartments were one of the smaller details that stood out. In the R1T, the back passenger seats have bins underneath the cushions, and both vehicles have sliding bins underneath the driver and shotgun seats. A full size spare tire is in the R1T bed and can be removed for even more storage if needed, but to save space for storage and its usable third row seating, the R1S has an inflatable spare tire under the trunk floor.

Rivian’s plans for interior color options were also mentioned, and there are three: Forest Edge (the green inside the demo R1T), Lunar Rock (the grey inside the demo R1S), and black. Additional premium options will be offered for interior fabrics which are already a blend of traditional materials and the types of fabrics you’d find in durable outerwear. The cabins also feature quad-zone climate control.

On the performance side, 170 kW of independent power is provided to each wheel which also provides for torque vectoring. The approximately 750-800 total horsepower in each vehicle works out to about 180 hp per wheel from each of the four motors. 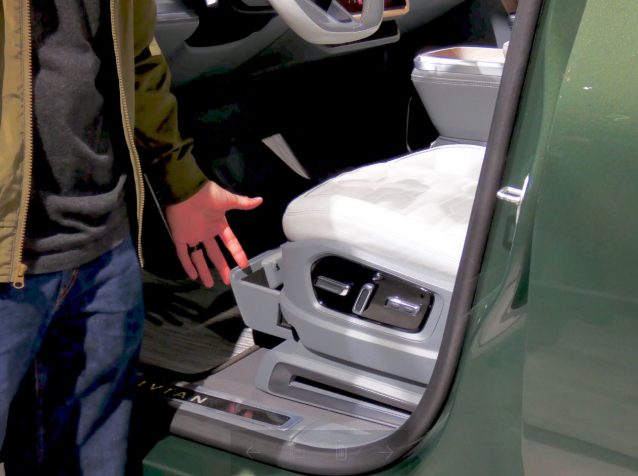 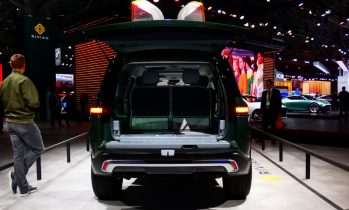 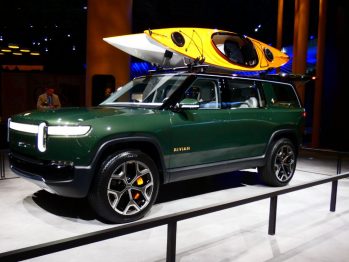 Rivian’s high density battery pack, complete with a thermal control system that adapts according to charging and driving behavior, then powers the whole package. A giant battery might not seem like it would be a great choice for four-wheel adventures, but Rivian has tightly encased its vehicles’ power supply using advanced materials science to be capable of wading up to three feet of water. Since there’s no engine requiring air, only buoyancy prevents a deeper crawl.

Progress in the automotive self-driving arena is moving fast, and Rivian has already integrated that reality into the R1T and R1S designs. The camera and radar hardware on production vehicles will be capable of Level 3 autonomous driving that’s upgradable via over-the-air software updates. Rivian’s initial vehicles will ship with Level 2 capabilities and use data accumulated from its customers’ driving sent to the cloud to develop its Level 3 transition, very similar to Tesla’s strategy. Previously, Rivian has additionally suggested Jurassic Park-style autonomous tours might be available for owners wanting a guided, real-world adventure experience.

Rivian has several test mules on the road using F-150 bodies, but only one production design model of each car has been made to be used at shows and in videos.

Finally, you might know that Rivian was founded in 2009 by CEO RJ Scaringe, an MIT graduate (he holds an MS and PhD in mechanical engineering), but it seems lesser known how his personal life story is imprinted right in the company’s name. Scaringe grew up near the Indian River region of Florida, and that’s where the Rivian name is derived (RIV(er)-(Ind)IAN).

All of those tidbits will now join the overall more well known features driving the appeal of Rivian’s R1T truck and R1S SUV. A recap of the basics may put them into a better perspective still.

On battery packs, Rivian’s focus on outdoor adventure means that decent battery capacity and range are key components if their product ideas are to be successful, and their much-touted 180 kWh battery “megapack” boasting a 400+ mile range seems to fit that bill. The mid-range 135 kWh pack claiming a 300 mile range is also decent for well-planned routes, and it just so happens to have a fun number of 2170 battery cells – 7,777 exactly if you count the battery inside the in-door flashlight. The 135 kWh battery pack vehicles are also the versions that will do 0-60 mph in 3 seconds, although all versions are speed limited to 125 mph. A lower end 105 kWh pack with a 230 mile range will be produced last, per the usual new EV strategy of offering premium cars before more affordable variations.

I'm exhausted, feet hurt, & nursing a migraine but… I got to meet Brian Gase, Chief Engineer at @Rivian and got some great pics of the R1T & R1S, incl the door flashlight I love. Lol. Thx!He humored me and gave a demo. 👐Now for some NYC gourmet b4 home for nap! #NYautoshow pic.twitter.com/gs5XfMNPGQ

The first R1S and R1T deliveries are set for the end of 2020, and Rivian is currently taking preorder deposits to reserve their upcoming vehicles. Purchase prices will start at $69,000 for the R1T and $72,500 for the R1S before tax incentives.

Aside from being first to unveil a near-production all-electric pickup truck, two other features in Rivian’s electric cars have stood out. First, the quad-motor “skateboard” chassis that forms the base of current and future vehicles centralizes and simplifies Rivian’s innovations into a flexible electric car platform for its future product lines. This feature has also drawn interest from big-name partners like GM and Ford, the latter having just signed a $500 million deal with Rivian to use its tech to develop their first all-electric vehicle.

A somewhat new tidbit about the skateboard platform is the size difference between the R1S version and the R1T version. The R1S chassis is 375 mm shorter than the R1T to boost its off-road capabilities. Both vehicles’ towing capacity is around 11,000 pounds.

The second well-known feature about Rivian’s two outdoor-purposed vehicles is the amount of storage space incorporated into the designs. The frunks are spacious with a 330 mL capacity, and the R1T truck has what they call a ‘gear tunnel’, which is essentially a large cargo space tunneled through the lower middle of the truck’s cab. It looks to have the makings of the next social media photo craze, but that’s obviously speculation. 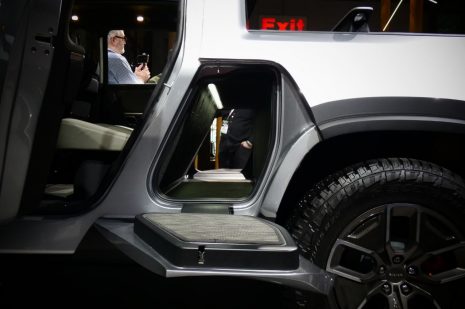 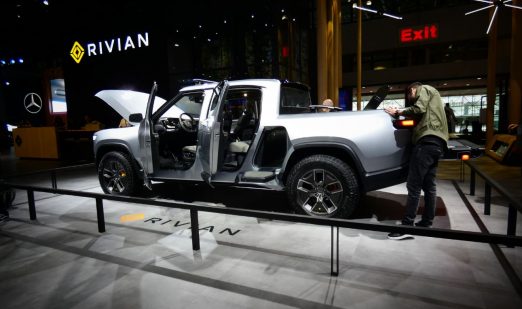 Both the frunk and tailgates have powered open and close functions for ease of use, the tailgate opening a full 180 degrees, and the bed has a powered built-in tonneau cover strong enough to support loading. Also included in the truck bed are 110V power outlets, onboard air, lights to illuminate the bed, and a gear cable that’s electronically connected to the vehicle. If the cable is cut or disconnected for any reason, the owner receives a notification on their Rivian app.

The last major Rivian feature to mention is the adaptable air suspension. Both vehicles’ ride height can be easily raised or lowered depending on road conditions to adjust comfort and handling characteristics. There’s even a ‘kneel’ mode to ease vehicle entry and exit.

Rivian’s R1T truck and R1S SUV already have enough innovative details to drive their consumer appeal as-is, but the company has even more developments going on in the background. Recently published patent applications have revealed a modular system for swapping out vehicle components based on activity need and a digital jerry can to extend the battery range even further for longer trips away from a charging network.

Additionally, trademark applications filed with the US Patent and Trademark Office have teased several other products in the works with names like 1C, 1A, and 2R. An interview with RJ Scaringe published by Bloomberg confirmed that Rivian is indeed working on six other products.

Details surrounding Rivian’s plans for a service network are still slim despite the abundance of other important information about the Michigan-based company. The R1S and R1T vehicles will use CCS charging ports, but whether a charging partnership or a home-grown effort is planned remains to be seen.

A NY International Auto Show attendee recently posted on Reddit details gathered from speaking with Rivian’s team, including Scaringe, and indications were made that the company is interested in using Tesla’s Superchargers, although they’ve had some difficulties with the effort. A potential roadshow tour offering test drives was also mentioned.

A couple of the Rivian video interviews can be watched below: