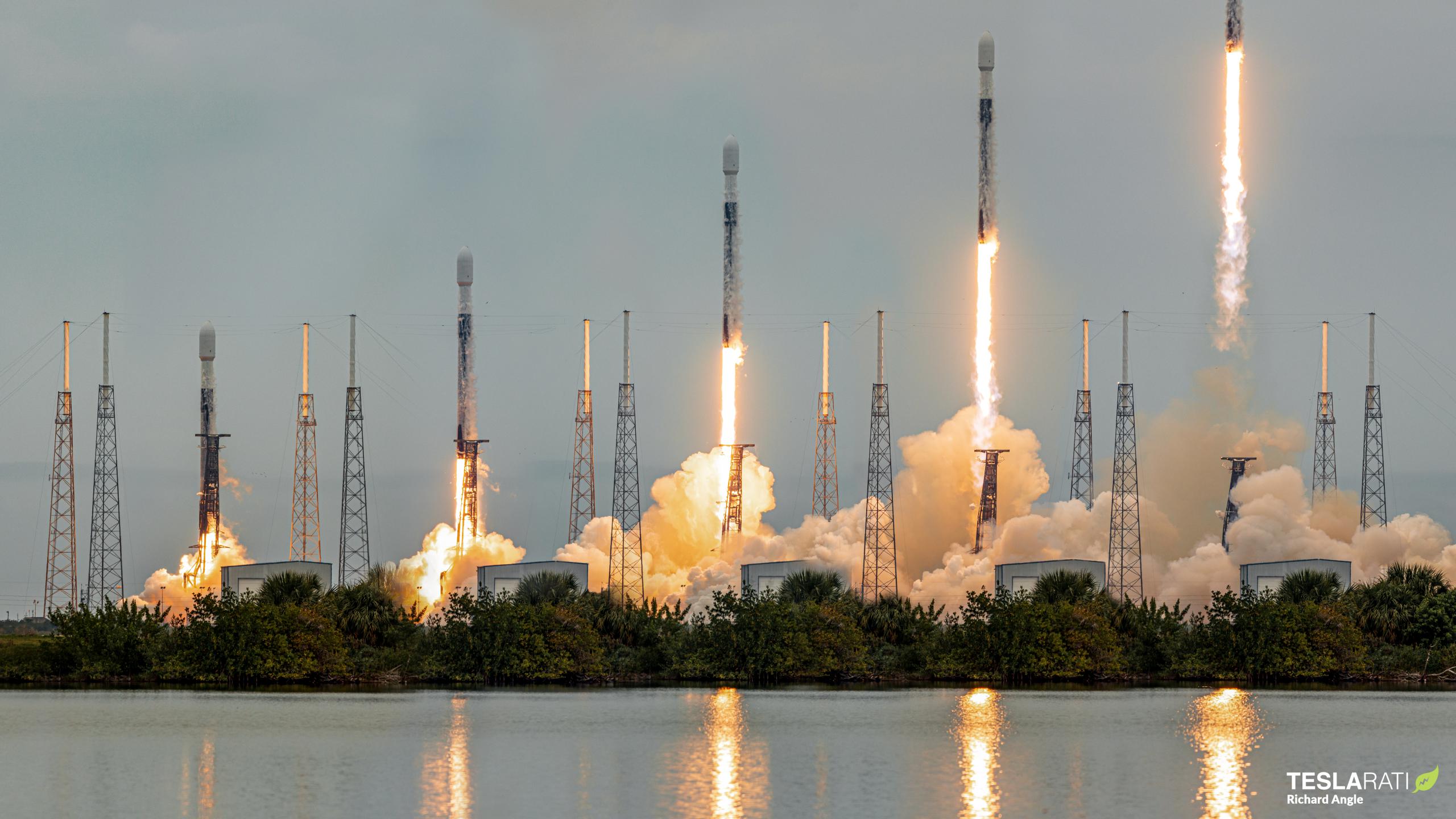 Falcon 9 B1061 lifts off with 40 customer satellites on SpaceX's 12th launch of the year. (Richard Angle)

SpaceX has aced its 12th launch of 2022 just a day over three months into the year, demonstrating a major leap in sustained launch cadence as the company strives to achieve ambitious goals set by CEO Elon Musk.

That 12th launch was Transporter-4, a dedicated rideshare mission managed by SpaceX itself. Falcon 9 lifted off on time on April 1st with fewer satellites than it had ever launched before on a Transporter mission – ‘just’ 40 payloads for about a dozen customers. The rocket performed as expected, reaching a parking orbit about nine minutes after liftoff. Booster B1061 – flying for the eighth time – safely landed on drone ship Just Read The Instructions (JRTI) about a minute prior, ensuring that it will be able to fly again. Over the course of more than 90 minutes, Falcon 9’s upper stage performed four separate burns to deploy all 40 payloads into several different orbits before finally deorbiting itself.

All told, Transporter-4 was SpaceX’s 121st consecutively successful launch, 37th consecutively successful landing, 112th landing overall, 89th reuse of a Falcon booster, and the 34th launch with a reused Falcon fairing. Falcon 9 is and continues to be the most reliable operational launch vehicle in the world. Just as importantly, it’s also the most prolific launch vehicle operational today.

In 2021, SpaceX successfully launched Falcon 9 31 times, falling a bit short of internal goals. Just before the year was over, though, SpaceX abruptly demonstrated the ability to complete five orbital launches in less than three weeks and six launches in less than four weeks – blowing its previous records out of the water and establishing the potential for huge increases in annual cadence. In 2022, SpaceX has thus far managed to sustain a similar cadence for a full quarter of the year.

Following Transporter-4, SpaceX has launched 12 Falcon 9 rockets in 90 days. If sustained for three more quarters, the company could launch 48 times this year – a 55% increase in annual launch cadence compared to a record 31 launches completed in 2021. A few weeks ago, SpaceX CEO Elon Musk established 52 launches – one per week – as the company’s overarching goal for 2022. More recently, Musk – in classic fashion – raised his already significant ambitions and boosted that goal to 60 launches, including at least a thousand more Starlink satellites.

52 launches may still be achievable with a few five or six-launch months. 60 launches, however, would require an average of 5.3 launches per month for the rest of 2022 – maybe not impossible but a huge challenge even before considering the fact that one of SpaceX’s three Falcon pads could be bogged down with as many as five Falcon Heavy and seven Dragon launches in the next nine months. Falcon Heavy, Falcon 9 Dragon, and Falcon 9 Fairing launches all require significant modifications to pad hardware, modifications that likely take at least a week or two to complete. Continuously swapping between setups to squeeze in the odd Starlink or satellite launch isn’t out of the question, but the added schedule risk would increase the odds of delays for several of SpaceX’s most delay-averse missions, including Crew Dragon, Cargo Dragon, and interplanetary spacecraft launches for NASA and two or three ‘national security’ missions for the US military.

Even if SpaceX falls short of Musk’s ambitious 60-launch target, it will take a minor disaster for 2022 to not be the company’s most spectacular year yet. This month alone, SpaceX is scheduled to launch the first all-private astronaut mission to the International Space Station no earlier than (NET) April 6th, followed by launches of Starlink 4-14 NET April 14th, NROL-85 NET April 15th, and a group of four NASA and ESA astronauts NET April 20th.