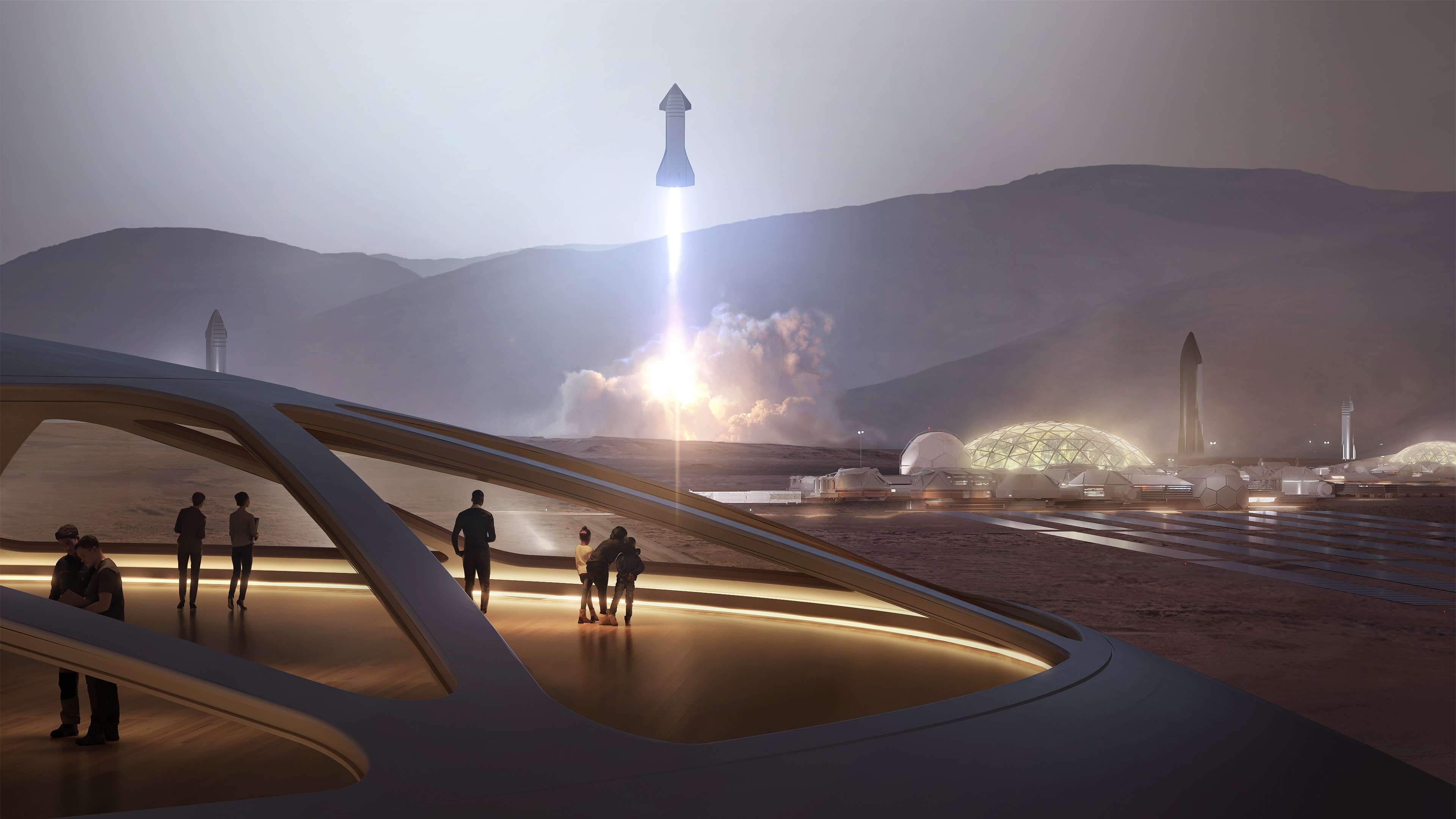 Artist rendition of a base on Mars. Credit: SpaceX

Elon Musk has big plans for Mars and it’s no secret that the SpaceX founder and CEO envisions a future where humans inhabit more than one planet, but how do we get there?

In a series of tweets, Musk outlined a plan to build a city on Mars by 2050, and fill it with 1 million people.

That may seem a bit outlandish but here’s how it would work.

SpaceX operates a fleet of Falcon 9 rockets that routinely launch and land, depositing satellites, cargo and soon people into space. However, in order to reach Mars, Musk and SpaceX need an even larger, more powerful rocket. That’s where Starship comes in.

In stark contrast to the classic black-and-white paint scheme of the Falcon family of rockets, Starship sports a shiny, stainless steel skin that gives off a futuristic vibe. And in true SpaceX fashion, the 387-foot ship will be reusable.

Starship, which is currently in development for future deep-space travel, will be able to ferry as many as 100 passengers beyond low-Earth orbit. The way to achieving that goal is by reducing the cost of spaceflight. He would like for anyone who wants to go to Mars, to be able to.

“Needs to be such that anyone can go if they want, with loans available for those who don’t have money,” Musk wrote.

To that end, Musk said he wants to build a fleet of at least 1,000 Starships—and launch at least three of them every day.

The Starship system is the latest in SpaceX’s troupe of increasingly larger rockets. In 2018, the California-based aerospace company launched and landed its Falcon Heavy rocket for the first time, generating 5 million pounds of thrust from the rocket’s 27 engines. But even that’s not powerful enough for Mars-based missions.

“Megatons per year to orbit are needed for life to become multi-planetary,”  Musk tweeted on Thursday.

To date, the heaviest payload to successfully land on Mars was the Curiosity rover, which touched down on the red planet in 2012. That rover weighed in at 1 metric ton (2,200 lbs.). Much heavier payloads will be required if a city is to build on Mars. NASA, SpaceX and others around the world are currently working on ways to land even larger payloads.

Starship is one method currently in development. Combined with its Super Heavy booster would be powered by 41 next-generation Raptor engines, making it the most powerful launch system ever created—even more powerful than the Saturn V moon rocket. Each launch would pack enough thrust to send more than 100 tons (equivalent to seven fully loaded school buses’ worth of mass) and 100 people into orbit at a time.

But the ship would also be able to navigate the tenuous Martian atmosphere and land safely on the red planet’s surface.

Musk estimates that a fleet of 1,000 Starships, able to tote 100 megatons of stuff to Mars, would be required to build a permanent settlement. That fleet could transport about 100 passengers each, totaling 100,000 people per year.

Musk said a lot of work still needs to be done, especially in regards to propellant production. The Raptor engines Musk plans on using are powered by methane (as opposed to the Kerosene and liquid oxygen that power SpaceX’s Falcon series).

Mars has a generous supply of methane, which Musk hopes could be used to establish refueling depots on the red planet.

There’s a lot of work to do if humanity is to reach Mars. SpaceX is currently working around the clock to build its next prototype of the Starship spacecraft. (The previous mockup exploded during testing, but did prove that the craft could get off the ground.)

If all goes well with this iteration, we may see a Starship prototype fly again soon.