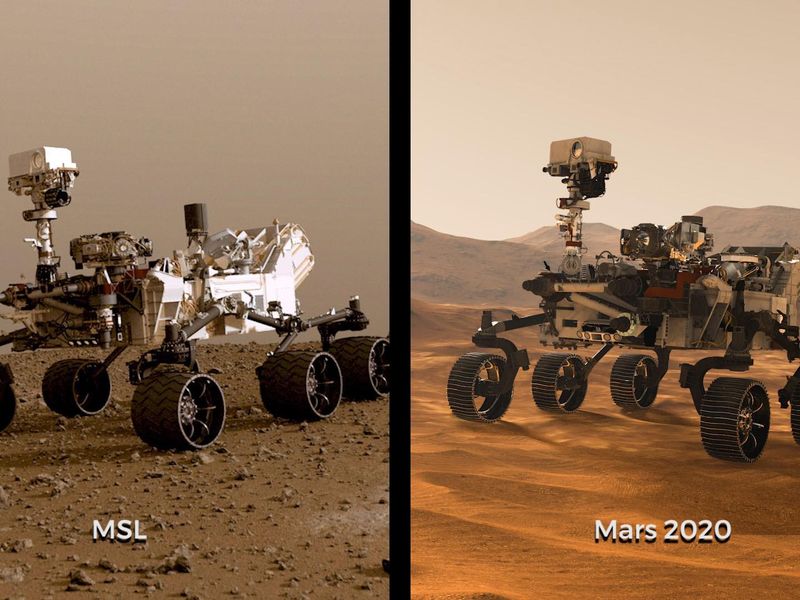 A Tale of Two Rovers: How does Mars 2020 compare to Curiosity?

A side-by-side view of the Mars 2020 and Curiosity rovers. Credit: NASA/JPL-Cal-Tech

NASA’s next Mars rover is almost ready to launch. Engineers recently took it for a test spin, before shipping it off to its Cape Canaveral launch site. The six-wheeled rover will blast off this July; once it arrives on Mars, it will scour the red planet for signs of ancient life.

The Mars 2020 rover, which should receive a name very soon, is nearly identical in appearance to its predecessor, the Curiosity rover. After landing on Mars in 2012, Curiosity has spent its time exploring Gale Crater, a 96-mile-wide crater.

It was once the site of an ancient lake and stream system; scientists believe that it may have been able to support life. However, like the rest of the planet’s surface, the area is dry today.

The twin rovers, Spirit and Opportunity landed on Mars in 2004 with one major goal: to follow the water. Right out of the gate, the duo proved that water once flowed on the surface of Mars. But what happened to it?

To answer that question, NASA launched the supersized Curiosity rover to learn more. Since landing in 2012, Curiosity discovered that Gale Crater was once home to an ancient lake billions of years ago and that it could have supported microbial life. The rover is still scouring the crater, hunting for clues as it climbs Mount Sharp, a 3-mile-tall (5-kilometer-tall) peak within the crater — that scientists believe was partially formed by water.

3,760 miles (6,050 kilometers) away, Mars 2020 will explore Jezero Crater, the site of an ancient delta. Here the rover will take the next scientific step: It will look for actual signs of past life, called biosignatures, by analyzing samples of rocks and soil. It will also bag up samples that could be retrieved by future missions and eventually returned to Earth for more in-depth analysis.

Mars 2020 is essentially a souped-up version of the Curiosity rover, but charged with searching for signs of life and collecting samples for eventual return to Earth. The new rover is estimated to cost $1.9 billion dollars and will carry a suite of 7 specialized instruments that will science the hell out of Mars.

But first the rover has to land on Mars. To do so, it must survive a harrowing process known as entry, descent, and landing (aka seven minutes of terror).

To the untrained eye, Mars 2020 looks like an identical copy of Curiosity, but if you look closely, you can tell that the two apart. Building a rover from scratch is extremely difficult and expensive. The folks at NASA built on the success of Curiosity and added new capabilities. A process that enabled more science at a reduced cost.

The beefier Mars 2020 rover is about 280 lbs. (127 kilograms) heavier than its counterpart. That’s because it carries different tools, like a larger drill. This enables the new rover to drill into rocks, extracting rock cores rather than just smashing them.

We all love the epic robot selfies and stunning views of Martian landscapes so of course the new rover will be packing multiple cameras. Curiosity is equipped with 17 cameras; by comparison, Mars 2020 will have 23 that will shoot mostly in color. Additionally, Mars 2020’s Mastcam-Z will film in high definition and be able to zoom.

Mars 2020 will also carry not one but two microphones on its journey so all of us back here on Earth can hear what Mars sounds like. The microphones will record the rover’s landing on Mars, as well as the Martian wind and will listen as the rover zaps scientific targets with its on board laser.

Another design improvement will be the wheels. Curiosity was equipped with aluminum wheels, which have been badly beaten up by the rugged Martian terrain. Sharp rocks have proved to be troublesome, with NASA modifying the rover’s driving plan to ensure Curiosity makes it through its mission. To avoid these kinds of issues, engineers made Mars 2020’s wheels more robust.

“Extensive testing in JPL’s Mars Yard has shown these treads better withstand the pressure from sharp rocks but work just as well on sand,” NASA officials said in a news release.

NASA plans to return to the moon and eventually send humans to Mars. To that end, the Mars 2020 rover will help pave the way for future missions. The rover will carry spacesuit samples to determine how they degrade over time, as well as a subsurface radar instrument that could potentially be used to find buried water ice.

Additionally, an oxygen generator will test technology that future astronauts could use to make their own rocket fuel from the Martian atmosphere.

A Tale of Two Rovers: How does Mars 2020 compare to Curiosity?