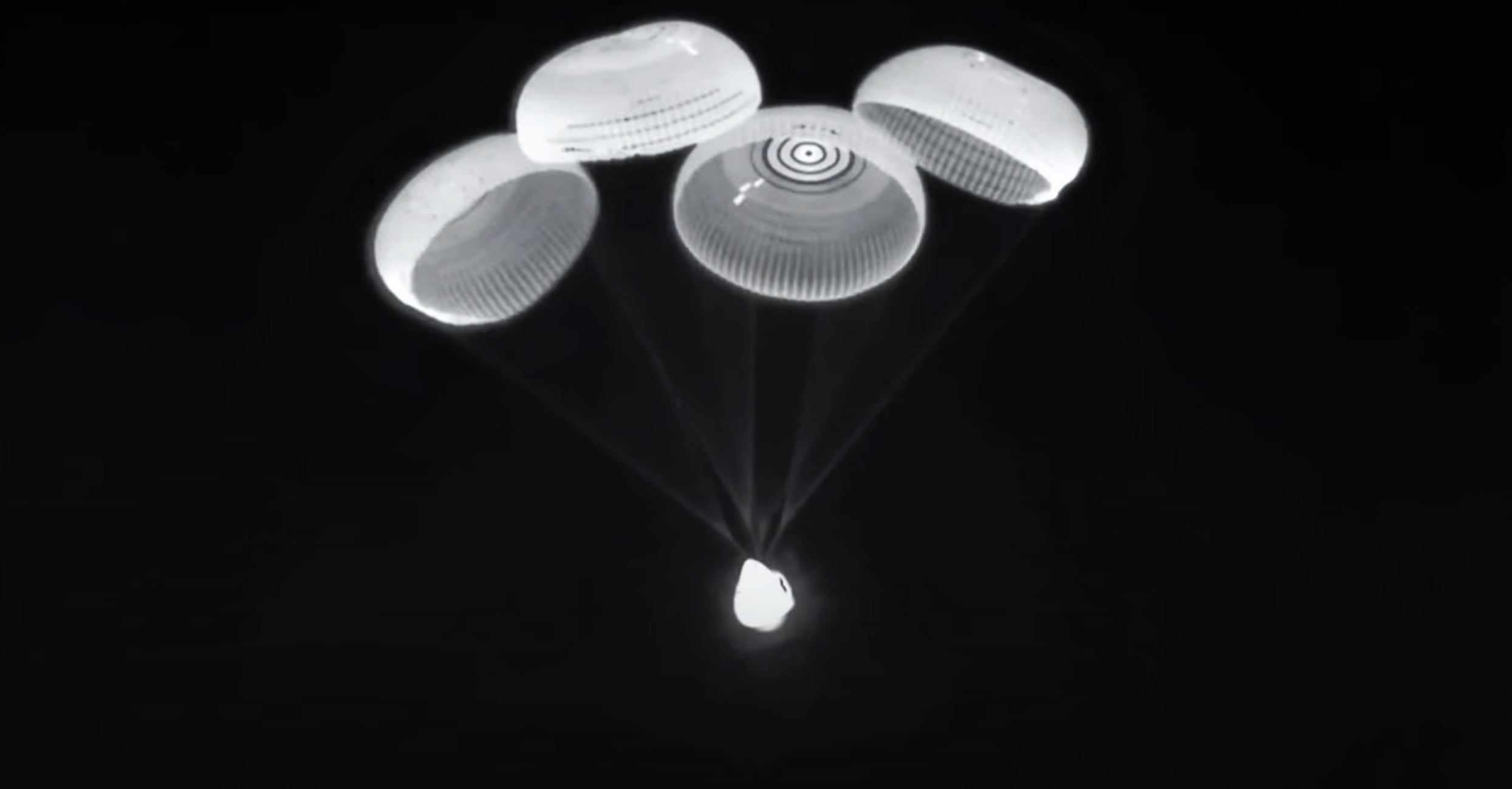 Crew Dragon's parachutes glow an ethereal white in an infrared view of the spacecraft's descent. (NASA)

After spending almost 200 days in orbit, a SpaceX Crew Dragon spacecraft has successfully returned four international Crew-2 astronauts to Earth, marking major firsts both for the company and NASA.

Launched on April 23rd, 2021, NASA astronauts Shane Kimbrough and Megan McArthur, ESA astronaut Thomas Pesquet, and JAXA astronaut Akihiko Hoshide are now safely back on Earth, marking the successful end of their Crew-2 mission. Unusually, due to poor weather conditions, Crew-2 has returned to Earth before their Crew-3 counterparts and replacements were able to join them at the International Space Station (ISS) and are now scheduled to fill the void left behind no earlier than November 11th after a launch late on November 10th.

For a number of reasons, Crew-2’s safe recovery is a major milestone for SpaceX and spaceflight in general. Most notably, following flight-proven Crew Dragon C206’s flawless second launch earlier this year, Crew-2 is officially the first time an orbital space capsule has twice safely carried humans to and from orbit – and after spending longer in space than any other US crewed spacecraft in history. While there was little reason for doubt, Dragon’s first successful ‘reused’ recovery is nevertheless an absolutely essential and historic milestone for SpaceX, a company that one day aims to routinely launch and land dozens of people at a time on Earth and other planets.

NASA – through its Space Shuttle program – is the only other entity in history to successfully launch and reuse a crewed orbital spacecraft, making SpaceX the second member of perhaps the most exclusive club in all of spaceflight.

Unexpectedly, despite indications from NASA in a recent prelaunch press conference that the maneuver would be skipped to increase schedule flexibility, Crew-2’s Dragon spacecraft ultimately performed the first US space station ‘flyaround’ maneuver in a decade. Astronaut Thomas Pesquet – rapidly becoming one of the best astronaut photographers in recent memory – took the opportunity to capture a number of photos of the ISS. NASA isn’t looking for anything in particular in those photos but they will still assuredly be useful for station engineers.

While numerically flawless, during Crew Dragon C206’s second descent, one of its four main parachutes lagged behind the other three during a process known as parachute inflation. Associate Administrator Kathy Lueders noted the odd appearance of the chute – which eventually expanded to its proper size – in comments shortly after crew egress but she confirmed that Dragon’s descent rate was nominal, meaning that the apparent nonconformance had zero impact on Dragon’s recovery and splashdown. The chute behavior – and Crew-2 recovery performance in general – will be reviewed in Crew-3’s launch readiness review (LRR) as early as November 9th.

SpaceX’s recovery team continues to refine Crew Dragon recovery procedures and Crew-2 certainly continued that trend. An hour and fifteen minutes after the spacecraft was in orbit and traveling seven kilometers (4.5 mi) per second and less than an hour after splashdown, all four Crew-2 astronauts were safely removed from Dragon and moved to medical facilities. All four will now be prepared to return by helicopter to dedicated facilities on land.