NASA and SpaceX are less than two weeks away from the first crewed mission to launch from U.S. soil in nearly a decade. But there’s still work to do before the craft blasts off towards the International Space Station.

On Friday, May 15, the Crew Dragon spacecraft journeyed from a fueling facility at Cape Canaveral’s Air Force Station to launch pad 39A at NASA’s Kennedy Space Center. Tucked inside the SpaceX hangar, the craft will undergo testing and checkouts before being attached to it Falcon 9 launcher in a few days.

The Dragon was filled up with hypergolic fuel (hydrazine and nitrogen tetroxide), which its built-in escape system and onboard thrusters use to maneuver.

Liftoff is scheduled for May 27 at 4:33 p.m. EDT (2033 UTC). At that time, NASA astronauts Bob Behnken and Doug Hurley will rocket towards space, and synch up with the space station less than 24 hours later. During their time on orbit, the duo will put the Crew Dragon’s systems to the test.

Hurley will get to manually pilot the autonomous spacecraft, ensuring the control systems are working as expected. Then the spacecraft will begin the docking process. But before Dragon can attach itself to the space station, it has to be prepped for launch.

The SpaceX Crew Dragon spacecraft arrives at Launch Complex 39A at NASA’s Kennedy Space Center in Florida, transported from the company’s processing facility at Cape Canaveral Air Force Station on Friday, May 15, 2020, in preparation for the Demo-2 flight test with NASA astronauts Robert Behnken and Douglas Hurley to the International Space Station for NASA’s Commercial Crew Program. Crew Dragon will carry Behnken and Hurley atop a SpaceX Falcon 9 rocket, returning crew launches to the space station from U.S. soil for the first time since the Space Shuttle Program ended in 2011. (NASA – Kim Shiflett, 05/15/20) 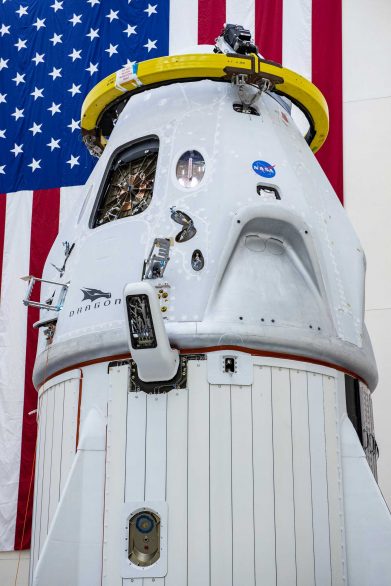 Crew Dragon C206 was installed on its trunk by May 1st, one month before launch. (SpaceX)

This week, SpaceX crews will inspect the Dragon’s electrical and mechanical attachments before attaching it to the Falcon 9. Using a massive crane, the crew will hoist the Dragon onto the rocket. The duo will then be loaded onto SpaceX’s transporter and make the trek up to the launch pad.

Hurley and Behnken know this pad well. Both astronauts flew their previous missions after launching from this pad. The crew is set to make the trip to Kennedy this week, arriving on May 20. They’ve been in official mission quarantine since May 13, although the duo has quarantined with each other for several weeks now, with minimal contact with other non-essential staff members.

Once the Dragon and Falcon are on the launch pad, SpaceX engineers will take some time to inspect and examine the vehicles before putting the Falcon through some routine pre-launch testing, including a fueling run and a static fire test.

The next major hurdle before launch will be a flight readiness review, which will take place on May 21. If that goes as planned, there will be a final launch readiness review on May 25th. In the meantime, after they arrive at the launch site, Behnken and Hurley will undergo some last-minutes training, make sure their spacesuits are fitting correctly, and do a full launch practice run on Saturday, May 23.

According to NASA, there is still a lot of work to be done ahead of the May 27th launch date, but currently, everything is on schedule. Once on station, Behnken and Hurley will stay up to four months on the orbital outpost before returning to Earth.