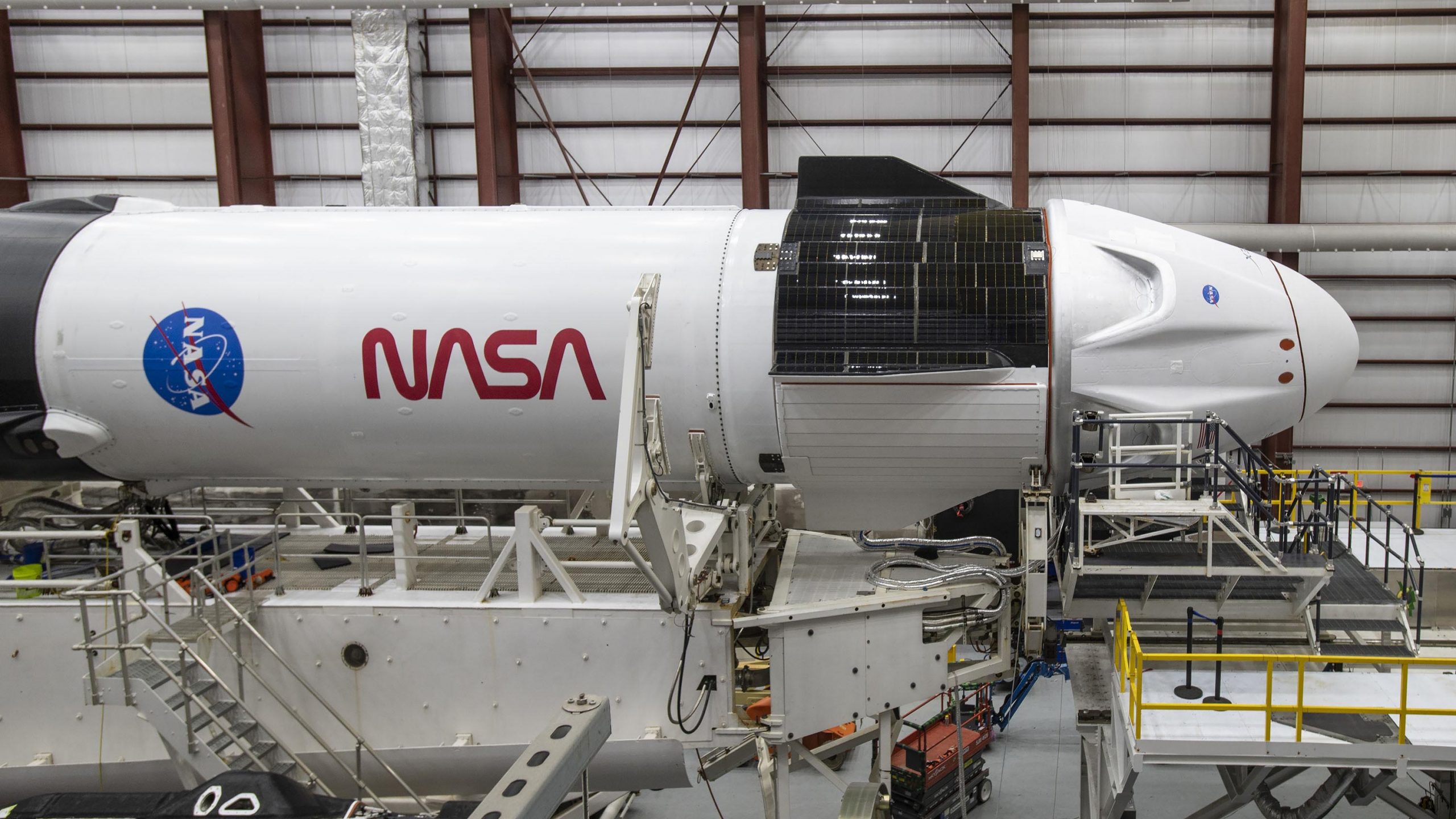 The Crew-1 SpaceX Falcon 9 and Crew Dragon capsule, "Resilience," are pictured in the LC-39A hagar ahead of the final static fire test. (SpaceX)

SpaceX and NASA have completed the last major review standing between Crew Dragon and Falcon 9 and the duo’s operational astronaut launch debut, meaning that a routine static fire test is all that really remains.

On Thursday, November 5, the SpaceX Crew Dragon capsule – named “Resilience” – of the first operational SpaceX mission to and from the International Space Station (ISS) as a part of NASA’s Commercial Crew Program (CCP) arrived at the Launch Complex 39A hangar at the Kennedy Space Center.

SpaceX is one of two commercial partners that NASA works with to develop a reliable system of crew transportation to and from the International Space Station. Since the retirement of NASA’s space shuttle program, the United States has been reliant on Russia and its Soyuz program to fulfill the task of maintaining an American presence aboard the ISS. With SpaceX’s first operational CCP mission – dubbed Crew-1 – a new era of commercialized crewed spaceflight will be ushered in.

On November 10th, SpaceX and NASA officials convened for a press conference following the successful completion of the Crew-1 flight readiness review (FRR) – the last major review standing between the assembled hardware and liftoff. SpaceX senior director of Human Spaceflight Programs Benji Reed listed off an array of historic milestones crossed as part of the FRR, noting that the review’s completion means that NASA has officially certified SpaceX for operational astronaut launches, making it the first and only private company in the world capable of safely launching humans.

Additionally, Reed revealed that Crew-1 and Cargo Dragon 2’s imminent December 2nd launch debut will together ring in a potentially unprecedented era in commercial spaceflight. Crew-1 – barring surprises in orbit – will further mark the longest continuous American spaceflight ever, beating a record set by a Skylab mission in the early 1970s if Crew Dragon remains in orbit for the full planned 180-210 days.

“Over the next 15 months, we will fly seven Crew and Cargo Dragon missions for NASA. That means that starting with Crew-1, there will be a continuous presence of SpaceX Dragons on orbit. Starting with the cargo mission CRS-21, every time we launch a Dragon, there will be two Dragons in space – simultaneously – for extended periods of time. Truly, we are returning the United States’ capability for full launch services and we are very, very honored to be a part of that.”

The Crew’s All Here

“Today we are taking another big leap in this transformation in how we do human spaceflight. What we’re talking about here is the commercialization of space. NASA is one customer of many customers in a very robust commercial marketplace in low-Earth orbit,” NASA Administrator Jim Bridenstine said.

Final Milestones Ahead of Flight

After arriving at their launch site in Florida, the four-member crew made the short journey to the LC-39A horizontal integration facility acquainting themselves with their “Resilience” Dragon capsule and the SpaceX Falcon 9 booster that will soon propel them to space. The Dragon capsule had been oriented horizontally and mated with the Falcon 9 first and second stages.

As the GPS B1062 and Crew-1 B1061 Falcon 9 vehicles were likely built simultaneously, SpaceX and NASA decided to take time to inspect all engines, as well as those of the upcoming NASA, European Space Agency Michael Freilich Sentinel-6 booster, B1063. After replacing a number of engines, both missions are on track to launch before the end of the month.

On Monday, November 9, SpaceX and NASA managers began the tedious process of completing a flight readiness review. The meeting that extends an entire day, or two, involves managers from SpaceX, NASA’s Commercial Crew Program, and the International Space Station program collaborating in discussion to conduct a joint pre-flight examination of all previous specialized reviews – such as ones done specifically for the Dragon capsule or the Falcon 9 booster. The meeting also serves as an opportunity for every department to discuss and close out any remaining concerns. The meeting began at 9 am on Monday, November 9, and concluded on Tuesday, November 10.

The B1061 Falcon 9 booster and Crew Dragon “Resilience” capsule were transported the short distance from the hangar to the launchpad ahead of the test firing of the nine Merlin 1D engines – a final test to certify all flight-critical hardware ahead of the launch attempt. Clearing the final hurdle before flight, SpaceX officially acknowledged that the Crew-1 mission is targeting liftoff at 7:49pm EST (0049 UTC on Nov. 15) on Saturday, November 14 from LC-39A at the Kennedy Space Center.

Following liftoff, the Dragon capsule “Resilience” will separate from the Falcon 9 first stage and continue to propel its crew on an uphill journey to rendevous with the ISS approximately seven and a half hours later.

Live hosted NASA and SpaceX coverage of the events will begin approximately three and half hours prior to liftoff at 3:30 pm EST and will be available on NASA TV and the SpaceX website.