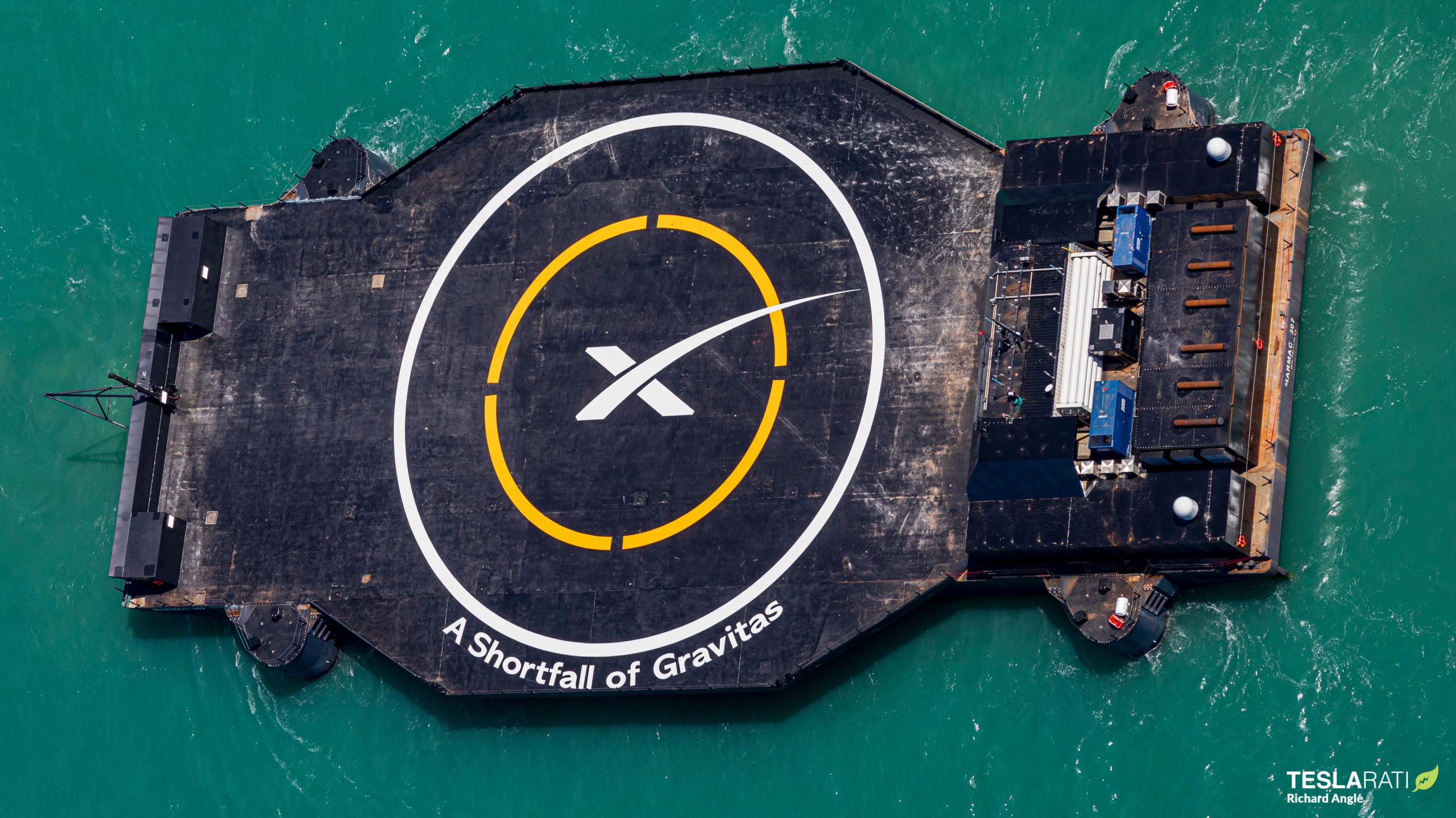 Drone ship A Shortfall of Gravitas (ASOG) has arrived at its home port for the first time. (Richard Angle)

Five weeks prior, senior drone ship Of Course I Still Love You (OCISLY) began a more than 8000 km (~5000 mi) journey from Port Canaveral, Florida to Port of Long Beach, California as part of SpaceX’s plans to return its West Coast launch facilities to active duty. Though it now appears that plans to begin the first dedicated polar Starlink launches out of Vandenberg Air Force Base (VAFB) as soon as July have slipped to no earlier than (NET) August, drone ship OCISLY did arrive at its new Los Angeles home port on July 6th, completing a smooth four-week journey.

As previously discussed on Teslarati, A Shortfall of Gravitas marks a significant visual departure from its siblings thanks to a number of apparent refinements and upgrades.

“Drone ship ASOG appears to be a fair bit sleeker and more optimized than its siblings. The substantial amount of extra equipment required to turn a barge into a ‘drone ship’ has been packaged in a far sturdier manner inside steel bunkers, whereas JRTI and OCISLY have generators, power supplies, computers, and communications equipment strewn about the edges of their decks in shipping containers.”

“Musk says that ASOG is SpaceX’s first truly autonomous drone ship. While JRTI and OCISLY are both capable of autonomously staying in one specific location after being towed out to sea and prepared by a team of technicians, ASOG may be able to travel several hundred miles out to sea, recover and secure a Falcon booster with its Octagrabber robot, and then return to Port Canaveral to offload the rocket without a single person boarding the drone ship.”

In footage shared by Musk of ASOG’s first sea trials, the drone ship was shown traveling at a significant clip under its own power – a first for a SpaceX drone ship. While Just Read The Instructions was technically upgraded with similarly capable thrusters and power generation capabilities in 2020, the drone ship has never been seen traveling at speed under its own power during early sea trials or operational booster recoveries.

According to Elon Musk, A Shortfall of Gravitas is apparently SpaceX’s first “Version 3” drone ship, likely implying that versions 1 and 2 are respectively represented by OCISLY and JRTI. As such, while the second iteration of JRTI may technically share some of ASOG’s upgrades, it’s possible that new design choices mean that ASOG really is the first drone ship truly capable of autonomous operations. On the other hand, it’s also possible that drone ship JRTI has been capable of similar self-propelled feats since its June 2020 East Coast debut but that regulatory hurdles and complexities have prevented SpaceX from doing so.

Regardless, it’s safe to assume that SpaceX is a ways away from truly hands-free Falcon booster recoveries and that drone ship ASOG will be towed to and from landing zones – and accompanied by humans – on its first few missions.

Meanwhile, ASOG’s new ‘Octagrabber’ robot – used to remotely secure Falcon boosters at sea – has been staged on the dockside for imminent installation on the drone ship. As of mid-July, though, it’s unclear if SpaceX has any launches at all scheduled in the second half of the month, likely giving the company’s recovery team at least two weeks to prepare A Shortfall of Gravitas for its first booster recovery attempt – a rather literal baptism by fire.