According to SES chief technical officer Martin Halliwell, SpaceX intends to “thread the needle” with a unique hybrid Falcon 9 launch of his company’s SES-12 communications satellite on June 4th.

In the case of this launch, Halliwell’s “needle” refers to unsavory weather conditions present at Florida’s Cape Canaveral launch facilities, although weather appears to be improving significantly over the next few days. Originally scheduled for launch on May 24, SES-12 was pushed to May 31, June 1st, and finally June 4th, according to a tweet from SpaceX earlier this morning. Minor difficulties with hardware in the Falcon 9’s Block 5 upper stage required additional troubleshooting and were ultimately magnified by the fact that Cape Canaveral Air Force Station’s range is technically supposed to be closed for launches at the moment, a shutdown of two or so weeks meant to allow the station’s range to conduct routine maintenance and install upgraded hardware (radar, meteorology, helicopter maintenance, avionics, software, etc).

SES will have a 4 hour window and they will use it to wait for clear skies and fair winds before launch. They will be working with the 45th to “thread the needle” and it’ll be a long night for launch. @Teslarati #spacex #SES12 pic.twitter.com/y2J9BQCM82

As such, it’s unlikely that the minor upper stage hardware issues referenced by SpaceX literally entailed a 72 hour delay. In fact, it’s fairly unique for the Eastern Range to go so out of their way to accommodate launches well within a closure period – May 28 to June 9 – scheduled months in advance. Once SpaceX’s SES-12 mission is completed, the range will likely try to complete necessary maintenance ops.

Falcon 9 B1040 returns to Landing Zone-1 after launching the X-37B spaceplane. It’s second and final flight will be with the SES-12 communications satellite. (SpaceX)

In a press conference hosted by the satellite operator SES, CTO Martin Halliwell further discussed some of the more technical aspects of the imminent SpaceX launch, waxing poetic about the particular flight-proven rocket’s fusion of a Block 4 Falcon 9 first stage and a Block 5 upper stage. With its “monster” Block 5 Merlin Vacuum engine, Halliwell noted that the extra performance provided by the upgraded second stage’s higher thrust, the expendable first stage launch profile, and the removal of its grid fins and landing legs could enable as much as seven years of additional operational life for the massive communications satellite.

Although the CTO did not explicitly confirm it, his comments indicate that this launch of the Block 5 upper stage – likely the third after Falcon 9 Block 5’s May 11 debut – may operate at 5% higher thrust for the first time, something briefly discussed by SpaceX CEO Elon Musk in a press call before the Block 5 debut. In that call, the CEO stated that the upgraded vacuum version of Merlin would fly with its thrust downrated by 5% to avoid risking a customer’s payload while ensuring that the hardware and software upgrades were functioning as intended. It appears that the data and experience provided by the Bangabandhu-1 mission’s downrated thrust profile was extremely encouraging, leading SpaceX to open the throttle a bit more with the SES-12 mission, so to speak. 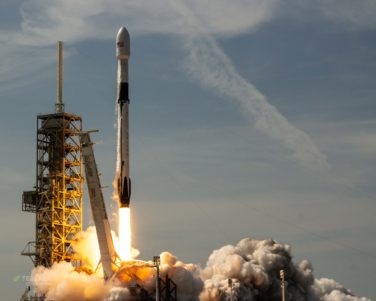 Falcon 9 B1040, the reused booster tasked with launching the second stage and satellite above Earth’s atmosphere, previously flew on September 7, 2017, launching the USAF’s secretive X-37B spaceplane into low Earth orbit. Teslarati photographer Tom Cross will capture the booster’s last flight around 12:30am on June 4th.