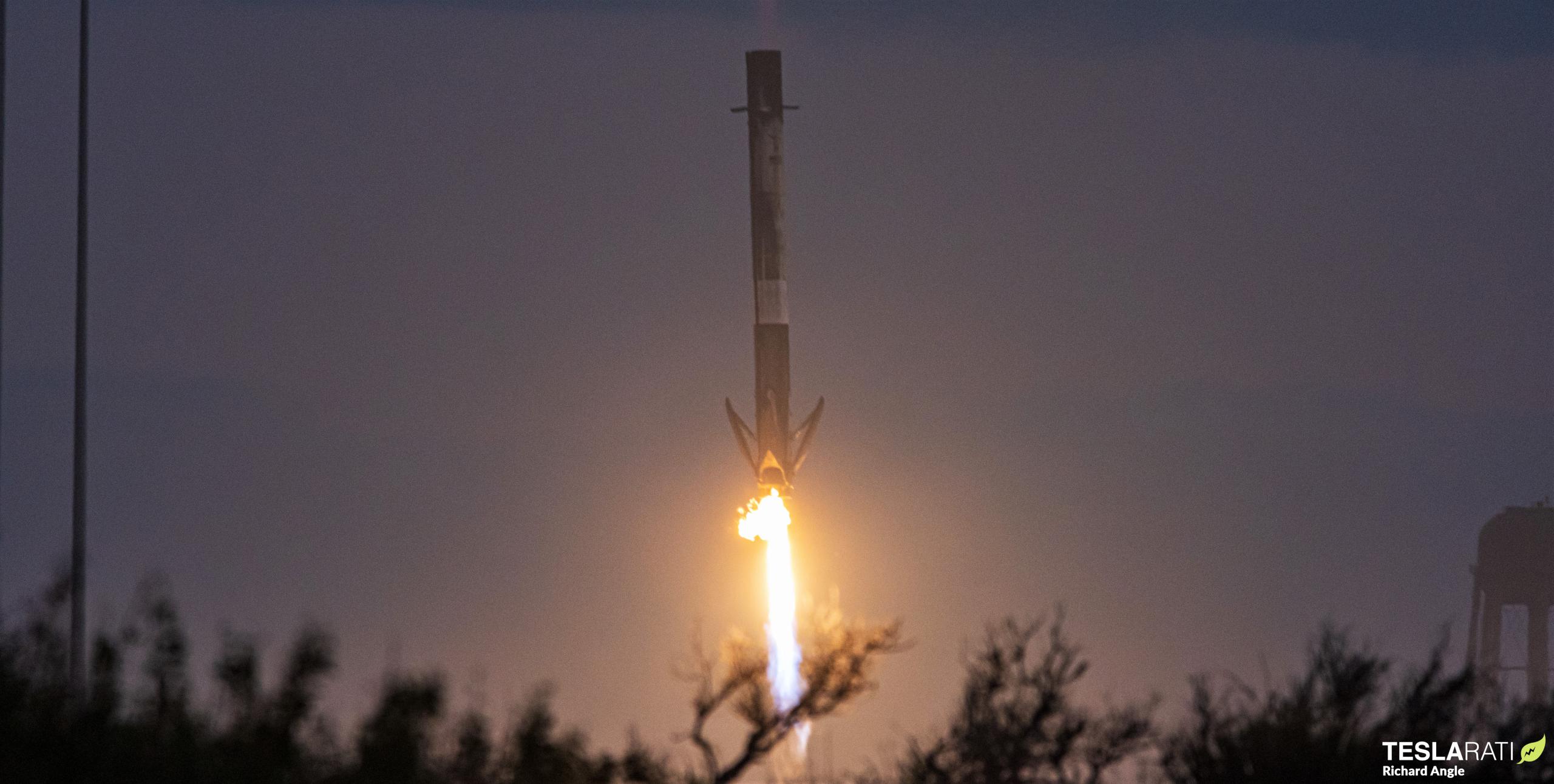 SpaceX sends OneWeb satellites to orbit on 55th launch of 2022

SpaceX has successfully launched the first of at least three missions for Starlink competitor OneWeb, completing its 55th launch of the year in the process.

Hopefully ending a strange series of delays that began last month, Falcon 9 lifted off from SpaceX’s NASA Kennedy Space Center LC-39A pad several days behind schedule on December 8th, 2022. The rocket performed perfectly, ascending for about nine minutes to reach a parking orbit around 400 kilometers (~300 mi) above Earth’s surface. B1069, Falcon 9’s flight-proven booster, shut down, separated from the upper stage, flipped around with cold-gas thrusters, and began boosting back to the Florida coast two and a half minutes after liftoff.

Thanks to the launch’s timing, which happened moments after sunset, B1069 first experienced sunset on the ground, ascended back into the light after liftoff, and finally experienced a second sunset while racing back to Earth – all beautifully captured by SpaceX tracking cameras. Eight minutes after liftoff, the Falcon 9 booster touched down on SpaceX’s LZ-1 landing pad, completing its fourth orbital-class launch in 12 months. Around the same time, Falcon 9’s upper stage reached orbit.

An hour after liftoff, the upper stage ignited a second time to circularize its parking orbit. Its payload – a record 40 OneWeb satellites weighing roughly 6.5 metric tons (~14,300 lb) – was then deployed in two sets of 13 and one set of 14 over the next half hour, after which the upper stage likely performed a deorbit burn to ensure it doesn’t become space debris.

For its own Starlink internet constellation, SpaceX routinely launches 54+ satellites – weighing almost 17 tons (~37,000 lb) – at once, demonstrating the kind of efficiency that can be achieved when a satellite is explicitly designed to use as much of Falcon 9’s performance as possible. To some extent, OneWeb did something similar, but for a different rocket. OneWeb’s far more traditional 150-kilogram (~330 lb) satellites were loosely designed to launch on Russia’s Soyuz 2.1 after the company purchased up to 21 of the rockets for $1-1.5 billion in 2015.

But their more traditional hollow-box design and traditional cylindrical payload dispenser means they take up as much or more space than Starlink satellites despite weighing 50-100% less. OneWeb says each satellite provides up to 7 gigabits per second (Gbps) of bandwidth, while each Starlink V1 satellite appears to have about 20 Gbps.

As previously discussed on Teslarati, OneWeb directly competes with SpaceX’s far larger Starlink internet constellation, and refused to engage with the company for launch services – even though Falcon 9 could have likely deployed its satellites more quickly and efficiently – until it was forced to.

“The only reason OneWeb agreed to launch a small subset of its first-generation satellites on SpaceX rockets was a series of egregious actions from Russia that made the pair’s exclusive arrangement too toxic to continue. In June 2015, just 16 months after Russia illegally invaded Ukraine’s Crimea and Donbas regions, OneWeb chose to tie itself at the hip to the unstable aggressor with a firm $1-1.5 billion contract that committed the entirety of its first satellite constellation to 21 Russian Soyuz rockets.

OneWeb nearly escaped consequences from that dubious decision. But in February 2022, Russia doubled down on eight years of small-scale war and Ukrainian occupation with a full-scale, gloves-off invasion with explicit genocidal intent. Europe eventually responded in part with economic sanctions and military supplies that Russia did not appreciate. In response, Russia took a batch of 36 OneWeb satellites hostage, stole the Soyuz rocket OneWeb had already paid for, and killed any possibility of the company completing the six or seven Soyuz launches left under its Arianespace contract. In September 2022, OneWeb announced that it had written off a loss of $229 million as a result of those stolen satellites and rockets.”

OneWeb was thus forced to either accept major delays while waiting for European launch options or look elsewhere. OneWeb was able to secure two contracts for India LVM3 rockets, each carrying 36 satellites, but the company chose SpaceX – the only Western launch provider in the world with large amounts of near-term capacity to spare – to launch three batches of 40 satellites.

OneWeb Flight 15 was SpaceX’s 55th successful launch of 2022, leaving the company just five launches away from achieving a 60-launch target set by CEO Elon Musk in March. Following an unintentional 12-day gap between launches caused by several delays, it’s no longer clear if SpaceX can hit that target. SpaceX has never launched later than December 23rd, and it’s extremely unlikely that the company will be able to launch five more times in the next 15 days. Even if it can break through that apparent barrier, it’s also almost impossible to imagine that SpaceX will be able to launch five more times before the end of the year if each mission continues to suffer days or weeks of technical delays.

Originally scheduled to lift off on November 22nd, 29th, 30th, and December 7th, SpaceX’s next mission – carrying a private Japanese Moon lander – is scheduled to launch no earlier than December 11th. After HAKUTO-R, Spaceflight Now reports that SpaceX has another four launches tentatively scheduled this month.

SpaceX sends OneWeb satellites to orbit on 55th launch of 2022