Scarcely 48 hours after they began, SpaceX technicians have already completed installation of all four of Falcon fairing recovery vessel Mr Steven’s new and dramatically larger arms, as well as eight giant struts. All that remains to be installed is an upgraded net, said by CEO Elon Musk to have four times the area of its predecessor.

Put simply, it’s difficult to express how large these upgraded arms really are, and photos still only give a partial sense of their scale. SpaceX technicians busy installing the new arms on July 10th nevertheless offer a fleeting appreciation of the true size of this new payload fairing recovery apparatus, which will hopefully see its first operational debut in just two weeks with a fairing recovery attempt after the Iridium-7 Falcon 9 mission, July 25th. 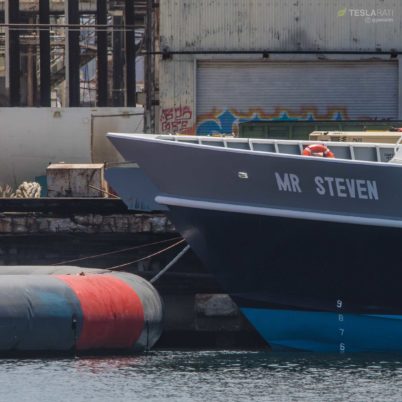 All arms on deck

While it’s difficult to estimate from photos alone, it appears that Mr Steven’s new arms are minimum of roughly 65 meters squared, assuming a square aspect ratio. In other words, the vessel’s next and newest net could have an area as large as 3600 square meters (~40,000 square feet, ~0.85 acres), easily more than quadruple the size of Mr Steven’s previous net. For comparison, the massive autonomous spaceport drone ships (ASDS) SpaceX often recovers its Falcon 9 and Heavy boosters aboard have a usable landing area of roughly 45,000 square feet, a little more than 10% larger than Mr Steven’s new net.

With these vast new arms, struts, and (soon enough) net, SpaceX is likely as close as they have ever been to successfully catching a Falcon 9 fairing, an achievement that would likely allow the company to begin reusing the large carbon fiber-composite shrouds almost immediately. Critically, although SpaceX appears to have begun attaching recovery hardware to both fairing halves in recent West Coast attempts, it remains to be seen whether Mr Steven’s new claw apparatus will be able to catch both halves, thus closing the gap on fairing recovery without necessitating the leasing and modification of perhaps three additional copies of the vessel. 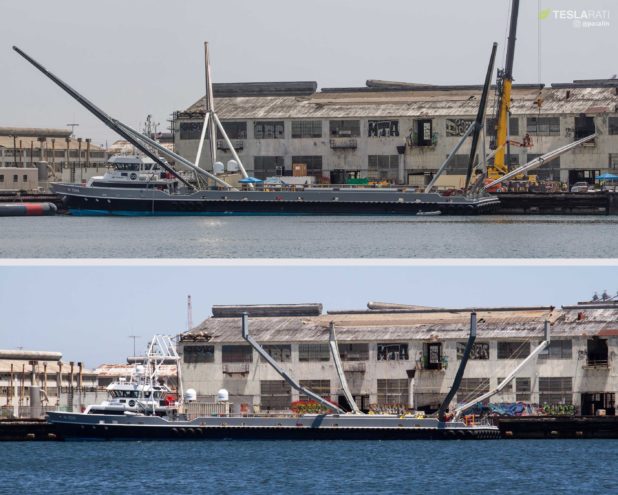 A before and after comparison of Mr Steven’s old and new arms. (Pauline Acalin) 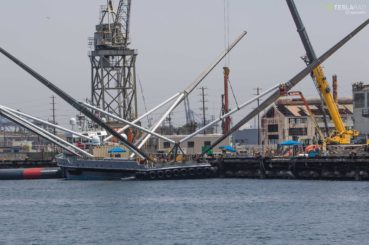 Even at this zoom, the human workers are difficult to make out. (Pauline Acalin) 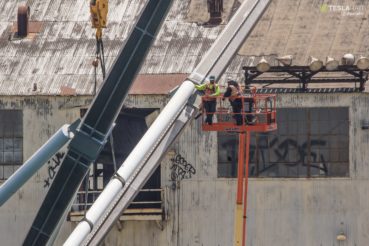 Adding three recovery-critical ships (two for West Coast missions, two for East Coast missions) to SpaceX’s already massive blue-water fleet could significantly raise the operating costs of each recovery attempt, as well as generally adding considerable complexity to the orchestration of those fleets come launch time. Perhaps not. Still, if Mr Steven sees success with his 4Xed net and arms, chances are very good that SpaceX will lease and modify another Fast Supply Vessel – if they already haven’t done so – to provide the company’s higher-volume East Coast launch facilities with their own, dedicated fairing catcher. Mrs Steven awaits… 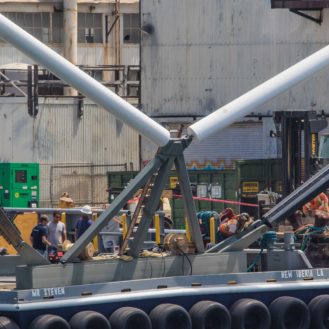 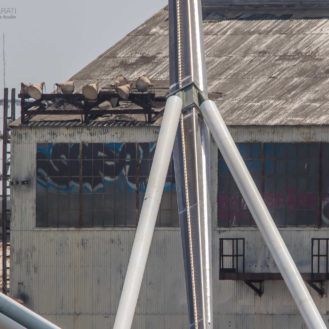 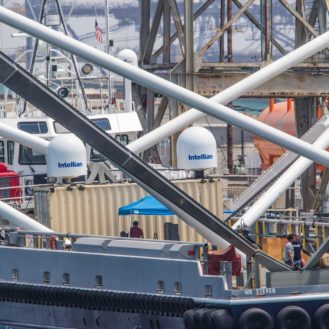 Port of San Pedro or an Andrew Pollock painting? You be the judge. (Pauline Acalin)

Zeroing in on Falcon fairings

Worth noting, SpaceX may have already halved the error margin officially advertised for the parafoil guidance units it procured from Canadian supplier MMIST, apparently missing Mr Steven by about 50 meters while MMIST suggests a 50% chance of successfully landing a payload in a 100-meter sphere. Given the significant expense likely incurred by designing, building, installing, and testing two distinct net and arm systems aboard Mr Steven, it’s safe to say that SpaceX engineers and technicians believe there is a very strong chance that the newest solution will successfully close the fairing recovery gap, said by CEO Elon Musk to be a rather literal 50 meters between the vessel’s old net and the unforgiving ocean surface.

With an additional 30 meters (~100 feet) of reach in both axes, the new net alone may be able to shrink that error margin by ~60%. Perhaps the fact that it also appears to cover (and thus protect) Mr Steven’s wheelhouse will allow the vessel more leeway to aggressively maneuver as the fairing nears touchdown, providing that final 20-meter leap to slip his net under the fall halves.

In the meantime, we will ponder who exactly SpaceX is procuring a 40,000 square foot net from.

Incredibly, this artist rendering of a much larger net installed on Mr Steven was perhaps two or more times smaller than the solution now installed on the vessel. (Reese Wilson)