While the majority of the 30-minute talk rehashed CEO Elon Musk’s 2017 BFR update and subsequent Reddit AMA, it also happened to contain a handful of new details and slides, including a suggestion that the first BFR spaceships to land on Mars will stay on the Red Planet as temporary habitats or tools for early colonists.

The senior engineer reiterated the company’s aspirational Martian launch targets, featuring two uncrewed cargo BFRs in 2022 and four total BFRs in 2024, two crewed and two uncrewed. Whether or not the lack of change in those dates (provided by Wooster nearly a year after CEO Elon Musk’s identical date reveal in September 2017) asserts that SpaceX’s BFR and Mars research and development remains on track, it almost certainly confirms that the company’s incredibly aggressive targets are here to stay.

Graciously documented by Reddit users /u/theinternetftw and /u/Nehkara and European Space Agency intern Maxime Lenormand, at least partially alleviating the unbelievably atrocious webcast quality, Wooster offered attendees a slightly deeper glimpse into the extensive in-depth planning going on behind the scenes at SpaceX. Almost all of the new slides Wooster presented focused heavily on the technical side of actually planning to create a self-sustaining Martian colony, ranging from locations for any prospective colony to the types of skillsets that would be exceptionally invaluable in early colonists.

And here are some additional considerations pic.twitter.com/jdVJglfHCG

At this point, it’s entirely possible that SpaceX’s internal team of Mars-focused engineers and experts has already begun to approach or even surpass the detail and value of previous theoretical Martian colonization research from the likes of NASA, ESA, and other space agencies and companies. Still, SpaceX has made it eminently clear that it wants and likely needs to collaborate with independent experts on Mars, life support systems, construction, resource extraction and refinement, and more.

A private Mars workshop recently hosted by SpaceX – likely the first of many to come – evidenced that desire to collaborate with companies, agencies, and researchers that have already put years of effort into analyzing and answering the same questions SpaceX will need to answer to successfully build a sustainable city on Mars 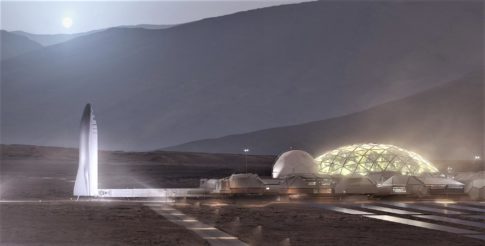 Perhaps the most interesting detail to come out of Wooster’s August 25th talk, however, was the slight affirmation that SpaceX is seriously thinking about leaving the first landed BFR spaceships on Mars indefinitely, although it’s not entirely clear which spaceships he was referring to. According to paraphrased notes taken from the webcast, early BFR spaceships on the Martian surface would remain there to be used as resources (habitats). He subsequently noted that early colonists would “probably” live out of the first landed spaceships, to begin with, suggesting that the uncrewed, cargo-dedicated spaceships would still return to Earth, as they will not feature human-rated life support systems of any of the necessities for living.

Still, multiple other slides in Wooster’s presentation make it clear that the goal from the very beginning of the first BFRs to Mars is to expand living space and infrastructure as quickly as possible, paving the way for the arrival of more and more colonists. It’s extremely likely that a significant number of skilled colonists will be needed to ensure that the colony remains healthy and safe, while also guaranteeing that it can sustainably grow as rapidly as feasible.

Plans are for sending the first 2 cargos as soon as 2022! pic.twitter.com/A5y3HNpIOx

Even though it certainly wasn’t the “BFR update” Musk suggested was coming soon, Wooster’s presentation provided the best glimpse yet into the extensive analysis and planning SpaceX is undertaking to discern how exactly to best structure its very first colony-focused launches to Mars.