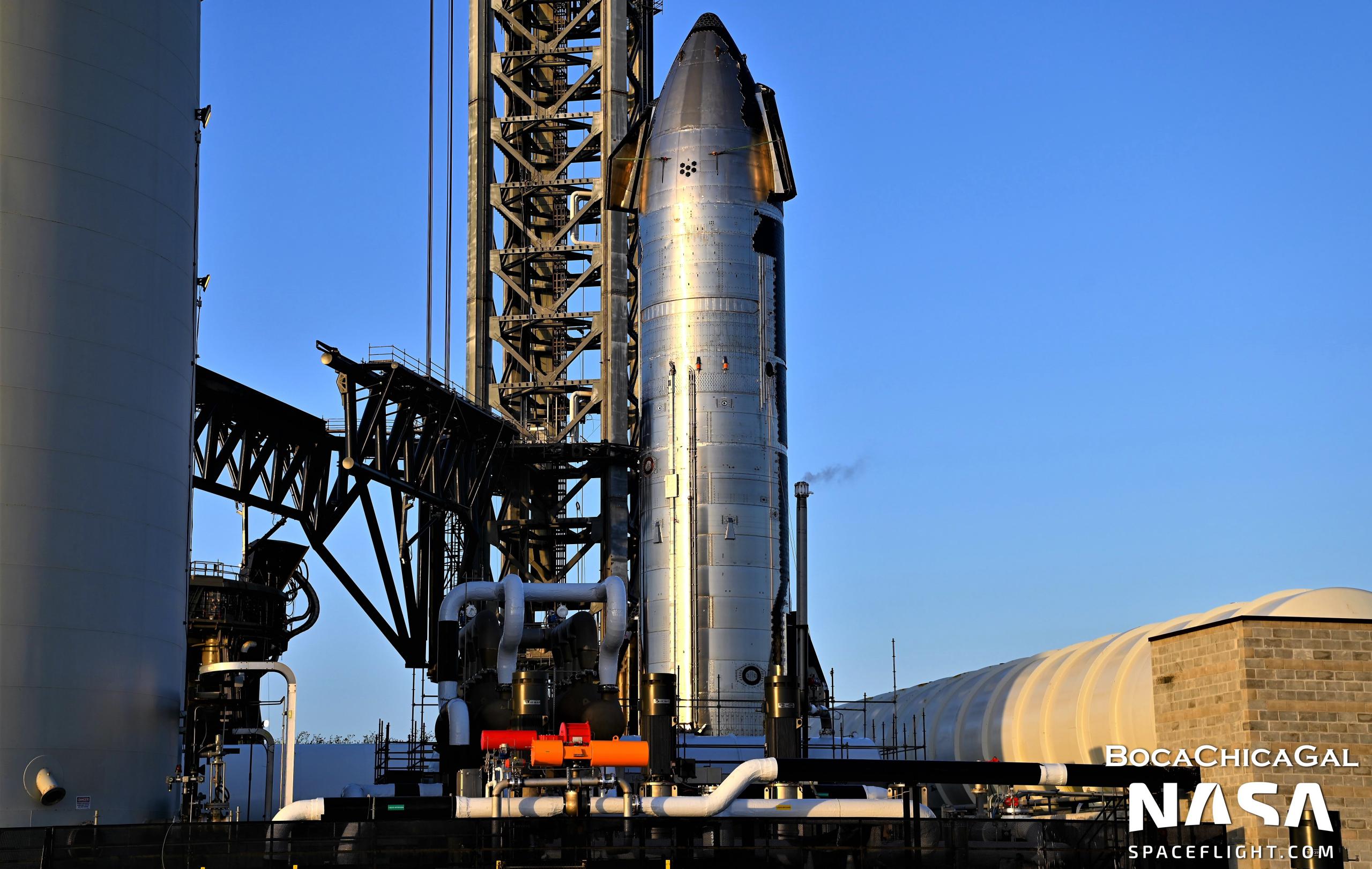 Ship 24 is pictured on May 29th, two days into minor repairs. (NASASpaceflight - bocachicagal)

SpaceX workers have been spotted repairing the company’s newest Starship prototype in the days after the rocket’s first partial test.

Starship S24 was transported to SpaceX’s Starbase, Texas orbital launch site (OLS) on May 26th after about two and a half months of assembly, marking the first time SpaceX transported a new Starship prototype to a test stand since August 2021. Less than 24 hours later, after attaching Ship 24 to a new test bay located beside the actual ‘orbital launch mount,’ the Starship prototype came to life and began its first proof test.

Unfortunately, while it’s impossible to judge with certainty without official confirmation, Ship 24 either failed to complete that test or did not make it through unscathed.

Known as an ambient or pneumatic proof test, the main goal is to pressurize a Starship or Super Heavy prototype with nonflammable, ambient-temperature nitrogen gas to ensure that the rocket and all its plumbing are structurally sound and working as expected. A successful test would likely require a prototype to reach and sustain flight pressures – up to 8.5 bar (~125 psi) as of 2020 – without exhibiting any significant leaks or problems.

For a while, Ship 24’s first ambient proof test went about as expected, with lots of small vents from its main liquid oxygen (LOx) and methane (LCH4) tanks. No activity was visible at the ship’s nose, where vents and plumbing attach to a pair of small landing (header) propellant tanks. Ship 24 is the first Starship with an upgraded version of those tanks after SpaceX decided to remove the methane header tank from the main methane tank and relocate it directly under the oxygen header tank, which takes up the tip of Starship’s nose.

After an hour or two of testing, a muffled bursting noise different from previous vents was heard, followed by a quieter ‘whoosh’ more akin to a long vent. At the same time as the loud noise was heard, a good dozen or so of S24’s thousands of heat shield tiles were knocked off the section of the hull between the Starship’s main tanks and nose cone. SpaceX depressurized Ship 24 soon after and within a few hours, workers could be seen extracting a pipe from the ship that appeared to have been bent almost in half.

Three days later, workers were spotted guiding apparent replacement pipes into Ship 24. Altogether, it appears that some small section of Ship 24’s internal piping failed catastrophically after it was pressurized during the vehicle’s first pneumatic proof test, knocking tiles loose and possibly damaging other adjacent plumbing. Given the location of that piping inside Ship 24’s nose section, there’s a nonzero chance that the failure occurred when SpaceX attempted to pressurize the Starship’s new header tanks, which would have started by pressurizing the propellant and gas lines leading to them. That would explain the first muffled burst, the subsequent venting sound that slowly faded to nothing, and the loss of heat shield tiles.

It would also explain why SpaceX decided to leave Starship in place and conduct repairs at the pad. Super Heavy Booster 7, which suffered a dramatic plumbing failure during an early proof test, was moved back to one of Starbase’s covered assembly bays for repairs. Had Ship 24’s incident been severe, it would have likely left the pad as well. The fact that Ship 24 did not move indicates that the failure was fairly minor and contained, only impacting some easily-replaceable plumbing.

Additionally, SpaceX appears to have moved Raptor heat shield components and a missing cover for one of Ship 24’s four flaps to the pad since the incident. On top of the team that has been working all weekend to repair the Starship, other sets of workers have set about closing out Ship 24’s ‘raceway’, which protects hundreds of feet of smaller plumbing and cables and a flight termination system that runs from the top to the bottom of the ship’s tanks; and some have begun preparing to fill gaps in Ship 24’s heat shield. Most of that work can be classified as ‘finishing touches’ and none of it would be prioritized if Ship 24 was not in decent shape.

Still, even minor damage is a setback. Ship 24’s next opportunity for redemption is a 10am to 10pm CDT window on Wednesday, June 1st, with backup windows available on Thursday and Friday.