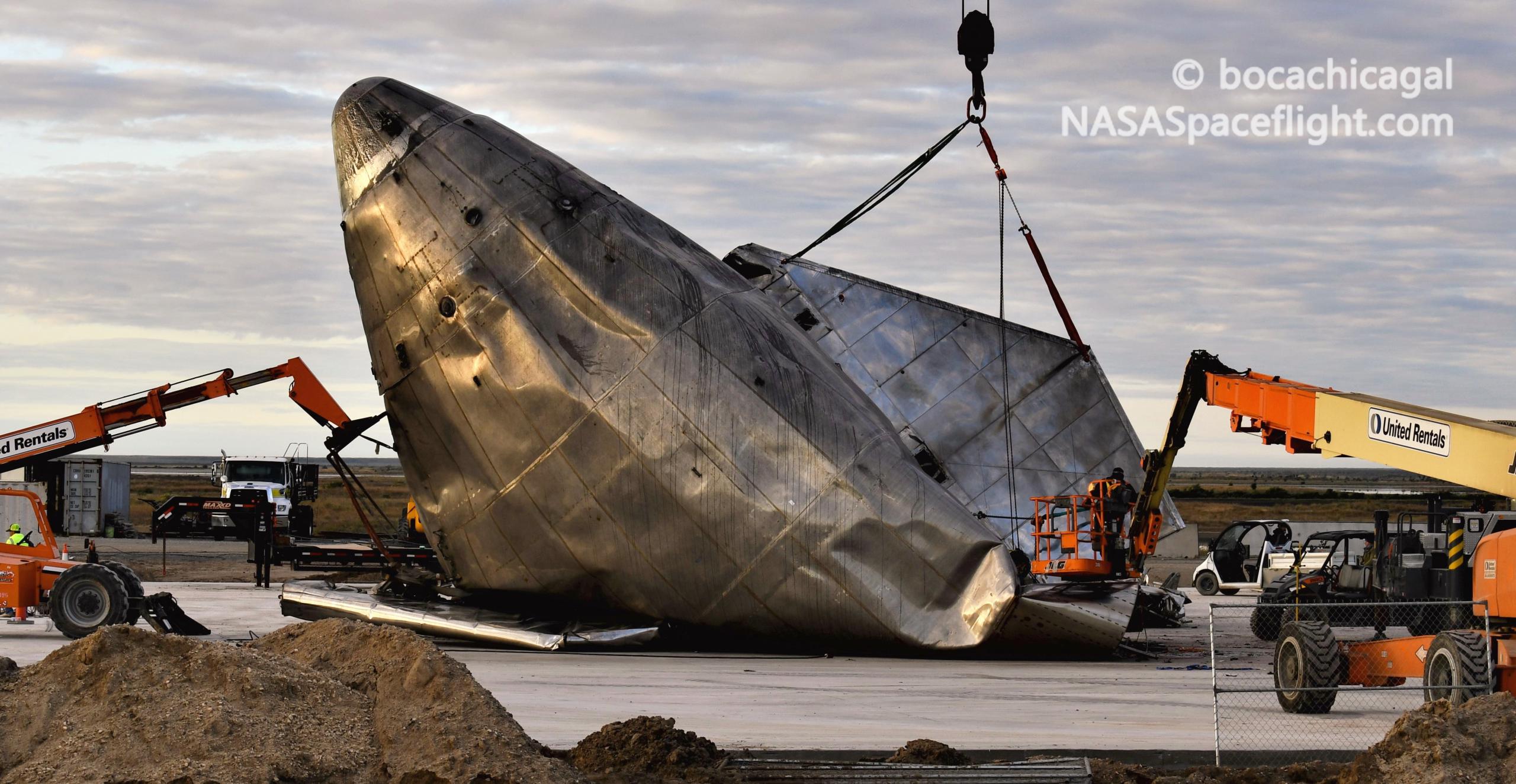 Although efforts were made to save the historic hardware, Starship SN8's wreckage is no more. (NASASpaceflight - bocachicagal)

In spite of tentative plans for preservation, SpaceX has fully scrapped the wreckage of the first high-altitude Starship prototype, clearing the landing zone it impacted for its successor’s imminent launch debut.

Known as serial number 8 or SN8, the Starship prototype was the first of any kind to fly beyond 150 meters (~500 ft), reaching an altitude of 12.5 km (~7.8 mi) on December 9th during its breathtaking launch debut. In an unexpected twist, SpaceX kept Starship SN8’s thrust to weight ratio as low as possible, stretching what could have been a two or three-minute test into an almost seven-minute ordeal with three consecutive Raptor engine cutoffs during the ascent.

At apogee, SN8 used cold gas thrusters to flip into a belly-down orientation and free-fell ~95% of the way back to Earth before igniting two of its three Raptor engines, performing a wild powered flip back into a vertical landing position and nearly securing a soft landing. Unfortunately, around 10-20 seconds before that planned landing, what Musk later described as low methane header tank pressure starved the Starship’s engines of fuel and more or less cut all appreciable thrust, causing SN8 to reach its landing zone traveling about 40 m/s (~90 mph) too fast. The rocket impacted the concrete pad, crumpled, and exploded.

By all accounts, success was one of the less likely outcomes SpaceX expected from SN8’s high-altitude debut, with Musk himself estimating the odds of total success to be just 33%. Additionally, Starship SN8 effectively made it all the way to a low-speed landing regime that Starships SN5 and SN6 all but flawlessly demonstrated with back-to-back 150m hops and landings in August and September 2020.

In other words, despite the explosive end, SN8’s high-altitude launch debut was a spectacular success for SpaceX’s Starship program – possibly even preferable to a perfect landing given that it uncovered an unexpected issue with fuel tank pressurization. Beyond the landing failure, the Starship checked every single box on SpaceX’s test flight list, successfully debuting multiple Raptors, demonstrating multiple in-flight engine shutdowns and engine relights; proving that an unprecedented ‘skydiver-style’ landing maneuver is possible and viable; and successfully testing Starship’s ability to control itself in that bellyflop orientation with thrusters and four massive flaps.

Speaking in a recent interview with Ars Technica, in the words of pragmatic SpaceX COO and President Gwynne Shotwell, SN8’s launch debut “de-risked [the Starship] program pretty massively.” According to Musk, SpaceX engineers were quickly able to determine why Starship SN8’s methane header tank was unable to maintain the fuel flow (pressure) needed for Raptor’s landing burn(s) and quickly implemented a solution.

Instead of pressurizing autogenously with methane gas, Starship SN9 will use helium to pressurize its fuel header tank, serving as a temporary fix while SpaceX determines what changes need to be made to get rid of that helium crutch. Landing pad now cleared of Starship remains and SN8’s impact crater more or less repaired, the only thing standing between Starship SN9 and its own 12.5 km launch debut is a triple-Raptor static fire test. Originally expected as early as January 4th, SpaceX never made it more than a few minutes into the attempt, while a backup window on January 5th was canceled later that evening. The test could now occur no earlier than (NET) Wednesday, January 6th.

Thankfully, although SpaceX was unable to save the entirety of Starship SN8’s wrecked nose section, the company did manage to extract a largely intact nose flap. The rest of the remains were scrapped on site and trucked away but it’s possible that certain significant components of SN8 – particularly the recovered flap – will eventually find themselves on display at one or more SpaceX facilities.