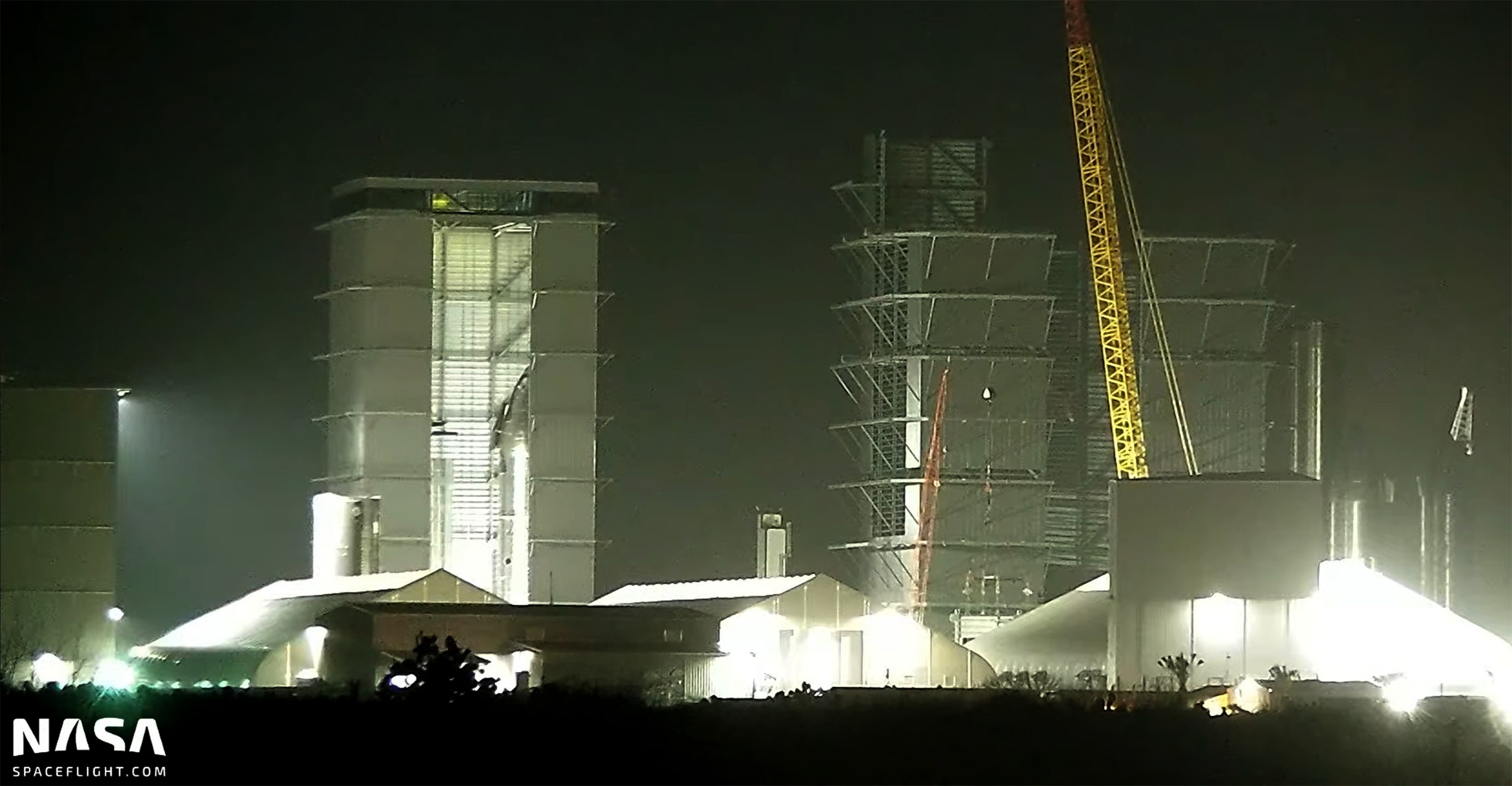 While substantially shorter than the Starship launch tower SpaceX has constructed a few miles down the highway and likely still a few months away from completion, Starbase’s new ‘wide bay’ became the tallest on-site manufacturing building on February 17th, 2022. Barring surprises, it’s poised to substantially improve the factory’s maximum Starship and Super Heavy booster production capacity within the next few months.

On February 17th, after extending the crane used for the task, SpaceX and contractors installed the first prefabricated section of the wide bay’s fifth ‘level,’ raising the new structure slightly higher than Starbase’s ‘high bay’ assembly building – the previous record holder. Measuring around 85 meters (280 ft) tall, the high bay is currently used for all Super Heavy booster assembly and also supports the final ‘stack’ of Starship prototypes, which – when fully stacked – are taller than the ‘mid bay’ their tank sections are first assembled in.

SpaceX and its primary contractor began assembling the high bay in July 2020. The building reached its full height by early October and was ready – with a slight workaround – to start stacking SpaceX’s first Super Heavy booster prototype by January 2021. Despite the fact that the new building is significantly larger and requires several times as much framework, SpaceX’s ‘wide bay’ assembly has only taken slightly longer. Based on past trends, it will likely take less than a week for all four sections of the wide bay’s fifth level to be installed, at which point the whole structure will be approximately 90 meters (~295 ft) tall.

It remains to be seen if the wide bay will get a smaller sixth level for its roof. SpaceX turned the top of the high bay into a combination of a bar, meeting room, entertainment venue, and an observation deck with wraparound windows.

SpaceX has never used the high bay to stack more than one vehicle (Starship or Super Heavy) at a time, seemingly implying that it only has enough usable floor space for three 9-meter (30 ft) wide sections of either rocket. Measuring about 40 meters (130 ft) tall, Starbase’s ‘midbay’ is the hub for Starship tank section stacking but is too short to be used for nose section installation.

If SpaceX maintains its pace, the wide bay could easily have its basic structure completed by the end of next month. Additionally, a supplier has already delivered most of the components needed for the wide bay’s two large bridge cranes, meaning that SpaceX likely won’t have to cut a hole in its roof – like it was forced to do with the high bay – to begin using the new building as soon as possible.

It’s not entirely clear how the wide bay will integrate into the current ship and booster assembly flow but the building will likely measure around 35m by 50m wide (115 ft x 165 ft), 95-100m (310-330 ft) tall, and offer approximately twice as much usable surface area as the high bay upon completion. CEO Elon Musk says that SpaceX’s goal for Starbase is to complete at least one Starship and Super Heavy booster per month by the end of 2022. With the wide bay and some general streamlining, that may actually be achievable.