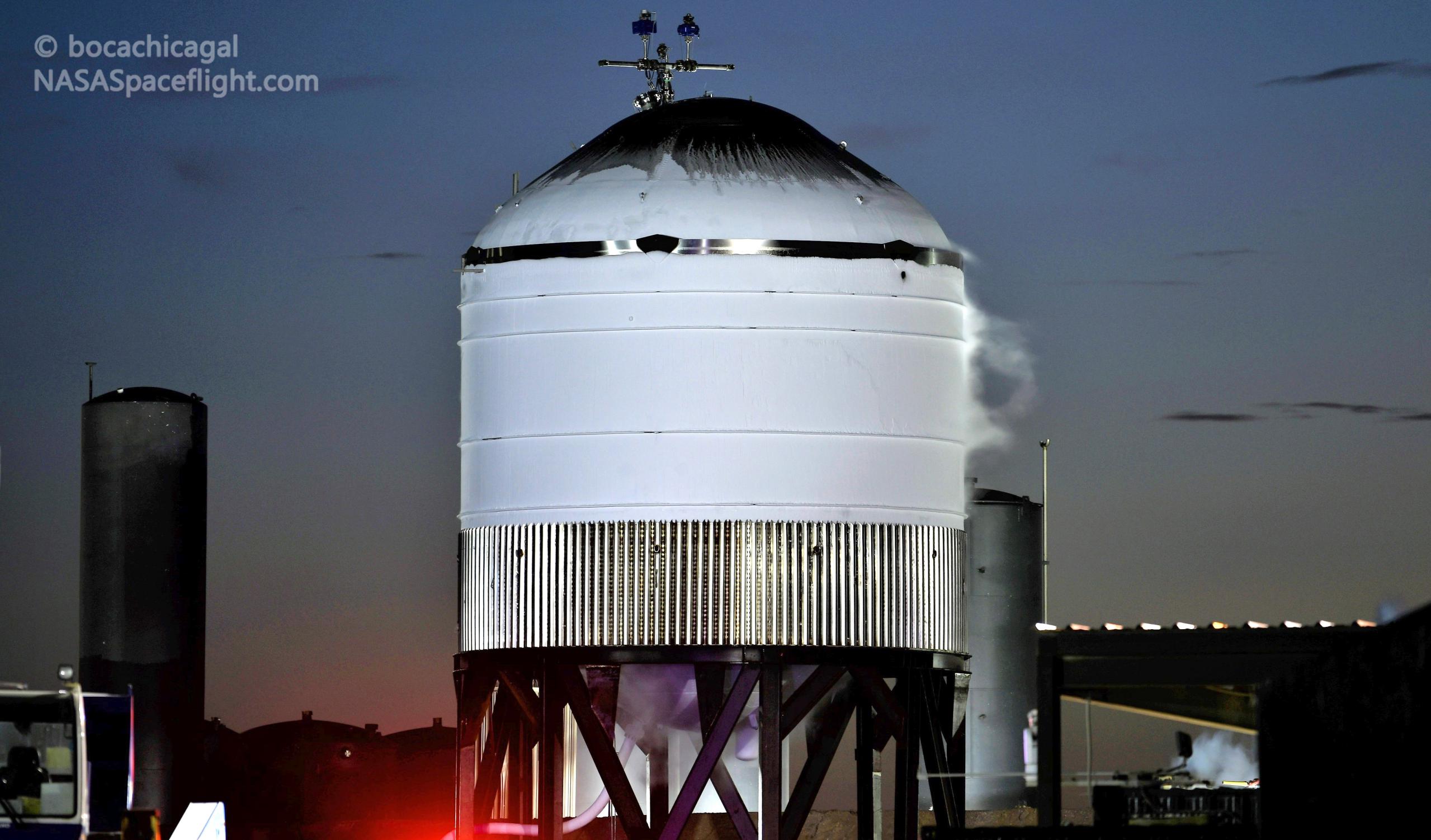 A prototype of SpaceX's custom-built Starbase propellant storage tanks appears to have passed its first test without issue. (NASASpaceflight - bocachicagal)

Likely to the relief of many, SpaceX appears to have successfully tested a prototype of the custom-built Starbase propellant storage tanks that will eventually hold thousands of tons of fuel and oxidizer.

Given that SpaceX appears to have almost retroactively assembled the GSE4 test tank after building the final products, the results from its testing were always going to be significantly more anxiety-inducing than any of the more than half-dozen other tanks the company has tested in the last year and a half. Having already fabricated, assembled, or even installed six of seven planned GSE tanks, the discovery of major issues during testing could potentially cause months of delays by forcing SpaceX to perform lengthy repairs or even fully scrap all six existing tanks and start over.

Thankfully, at least for the time being, it appears that SpaceX can write off those potential worst-case scenarios. On August 25th, SpaceX took advantage of a test window initially believed to be for Starship S20 and put the cobbled-together GSE4 tank through its paces for the first time. As with previous test tanks, all SpaceX can really do is fill the prototype with liquid nitrogen (LN2), a non-flammable alternative to liquid oxygen or methane propellant that is approximately as cold and heavy. As a storage tank prototype, though, GSE4 has no need for hydraulic ram setups used to simulate the thrust of Raptor engines on several previous prototypes.

As such, one or several cryogenic proof tests were all that were ever really in GSE4’s future. On GSE4’s first test, SpaceX performed a more or less normal cryogenic proof, completely filling the tank with LN2, closing its vents, and then allowing the natural process of LN2 boiloff to raise the tank to the desired test pressure. However, unlike other test tanks, GSE4 never actually appeared to reopen its main vents. In fact, SpaceX may have never actually drained liquid nitrogen from the test tank, instead simply letting it slowly warm up and boil off into gas that was seemingly managed and vented by ground systems instead of the tank itself.

As a result, GSE4 stayed frosty (indicating a significant amount of remaining liquid nitrogen) for more than eight hours, strongly implying that it was either very slowly drained or simply allowed to warm up naturally. Given that large cryogenic storage tanks really don’t have to be significantly pressurized to complete their job, it’s possible that GSE4’s first test was primarily meant to verify the basic structural integrity of a tank that’s slightly different than those on Starship and, more importantly, test a different method of pressure and fluid management where most of that work is done by external, permanent systems on the ground.

That’s exactly what one might expect of rocket tankage slightly modified to serve as ground storage tanks. SpaceX’s GSE tanks never have to act as self-contained units and can instead rely almost entirely on separate systems.

Aside from verifying that that slightly different method of tank operations works as expected, GSE4’s first test likely also allowed SpaceX to better characterize the thermal properties of the thin steel skin and domes that are Starship and GSE tanks. Unlike GSE4, operational GSE tanks will be enclosed inside 12m (~40 ft) wide ‘cryo shells’ designed to insulate their cryogenic contents, but the insulative properties of the inner tanks (or the lack there of, rather) will still determine how well that insulation works and how much is actually needed to reach the desired boiloff rates. A contractor hired by SpaceX has already completed all seven cryo shells, so any results gathered from GSE4 will obviously be more of a check than a developmental test, but data is still data.