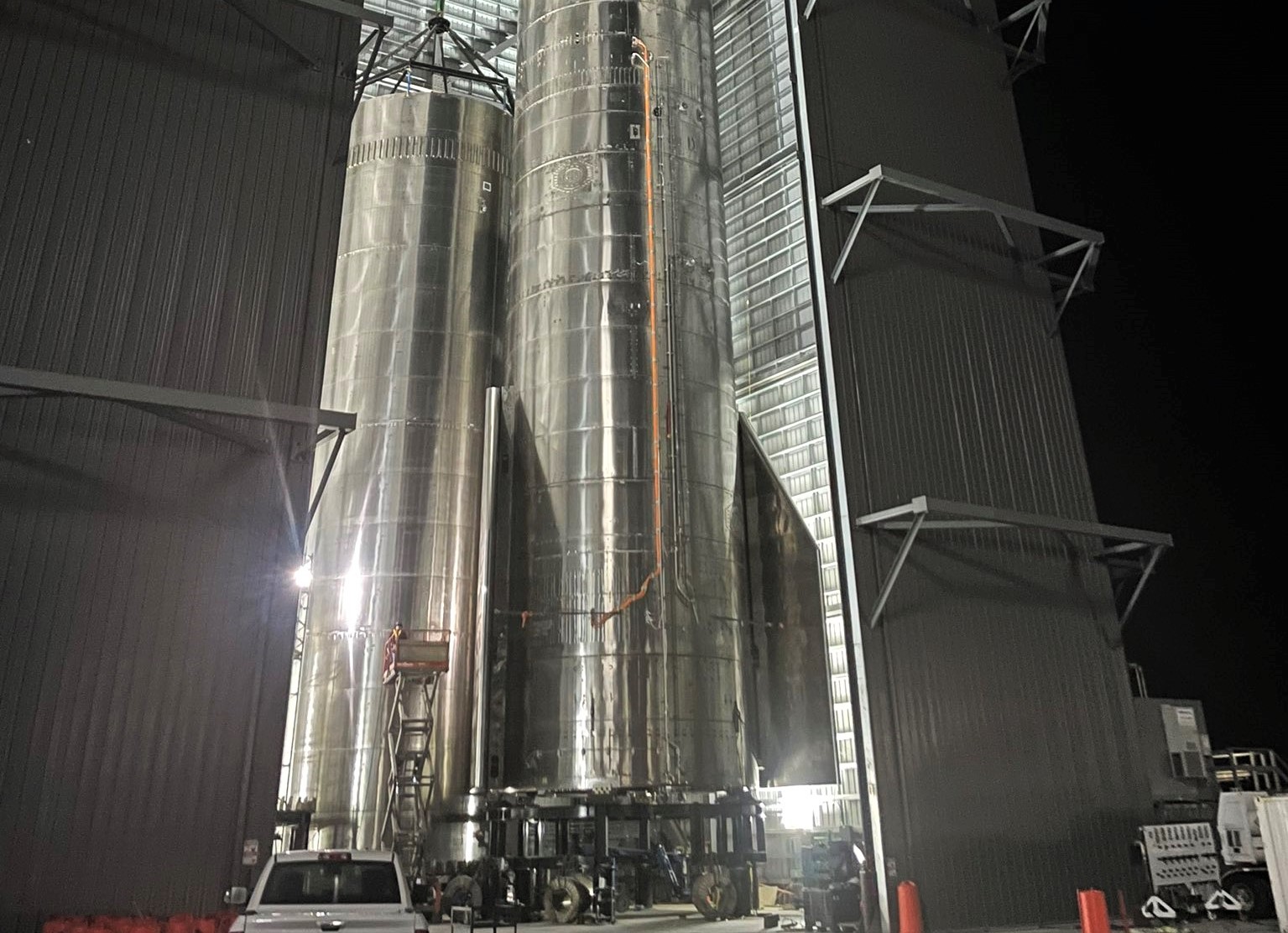 SpaceX CEO Elon Musk says that the second Starship booster prototype is “almost done” and has revealed that work on the first flightworthy booster has yet to begin.

For unknown reasons, SpaceX has recently changed the naming scheme for Starship and Super Heavy boosters. The booster SpaceX is currently assembling in Boca Chica has been referred to as “Booster 2” by Musk himself but, according to NASASpaceflight, is internally known as Booster 3 or B3, replacing its former Booster Number 3 (BN3) designation.

Regardless, SpaceX began stacking the Super Heavy booster prototype now known as B3 in mid-May. Around six weeks later, 23 or 24 rings have been stacked to create a partially finished prototype 9m (~30 ft) wide and approximately 42m (~140 ft) tall.

Just like Super Heavy ‘pathfinder’ BN1, which was scrapped almost the instant it reached its full height last March, Booster 3 appears to destined to stand 36 rings – 65m (~215 ft) – tall once complete. While drastically oversimplifying the process of vertically assembling the largest rocket booster ever built, that means that Super Heavy B3 is just shy of two-thirds (~65%) complete.

By simply averaging the time it’s taken for SpaceX to stack B3 to a height of 42 meters, the booster could reach its full height around three weeks from now (July 15th, give or take a week). For the most part, the most challenging and unfamiliar parts of Super Heavy B3 manufacturing and assembly have already been completed. Relative to Starship, which SpaceX has now built more than half a dozen prototypes of, Super Heavy is just a stretched Starship with no flaps, no nosecone, a far more complex engine section, and a forward dome section that needs to support car-sized grid fins.

Super Heavy’s larger propellant tanks also require a methane transfer tube – used to carry methane through the booster’s lower liquid oxygen tank – more than twice as tall as anything built for Starship. By all appearances, that ~35m (~115 ft) tall transfer tube has already been safely installed inside B3’s incomplete tanks. Around June 14th, B3’s lower two-thirds were effectively completed when its LOx tank stack was mated to the booster’s 29-Raptor engine section.

Outfitted with complex structural modifications to support massive grid fins and the first advanced ‘hot gas’ maneuvering thrusters ever spotted in public, Booster 3’s forward dome is already in the process of being welded to a stack of three steel rings. Once complete, the rest of Super Heavy B3 integration is fairly simple as far as rocket assembly goes and will require four more welding operations. Like BN1, there’s a good chance that SpaceX will mate Booster 3’s upper (methane) tank separately and then install the ~24m (~80 ft) tall, 13-ring section on top of the LOx stack to effectively complete the booster’s main structure

Of course, after the structure is complete, SpaceX will still need to finish plumbing, wiring, and generally outfitting a Super Heavy booster for the first time ever. Finally, while it remains to be seen just how finished B3 will actually find itself before heading to the launch pad, that process could also involve installing and testing four massive steel grid fins and, most importantly, up to 29 Raptor engines – a figure only beaten by the Soviet Union’s ill-fated N1 rocket.

Perhaps most significantly, Musk also revealed that B3 is not the Super Heavy booster assigned to Starship’s first orbital launch attempt, meaning that SpaceX will have to complete Booster 3 testing and build Booster 4 before that orbital test flight can occur. Given that Booster 3 assembly is on track to take more than nine weeks, Starship’s first orbital launch attempt is thus unlikely to happen before late August or September.