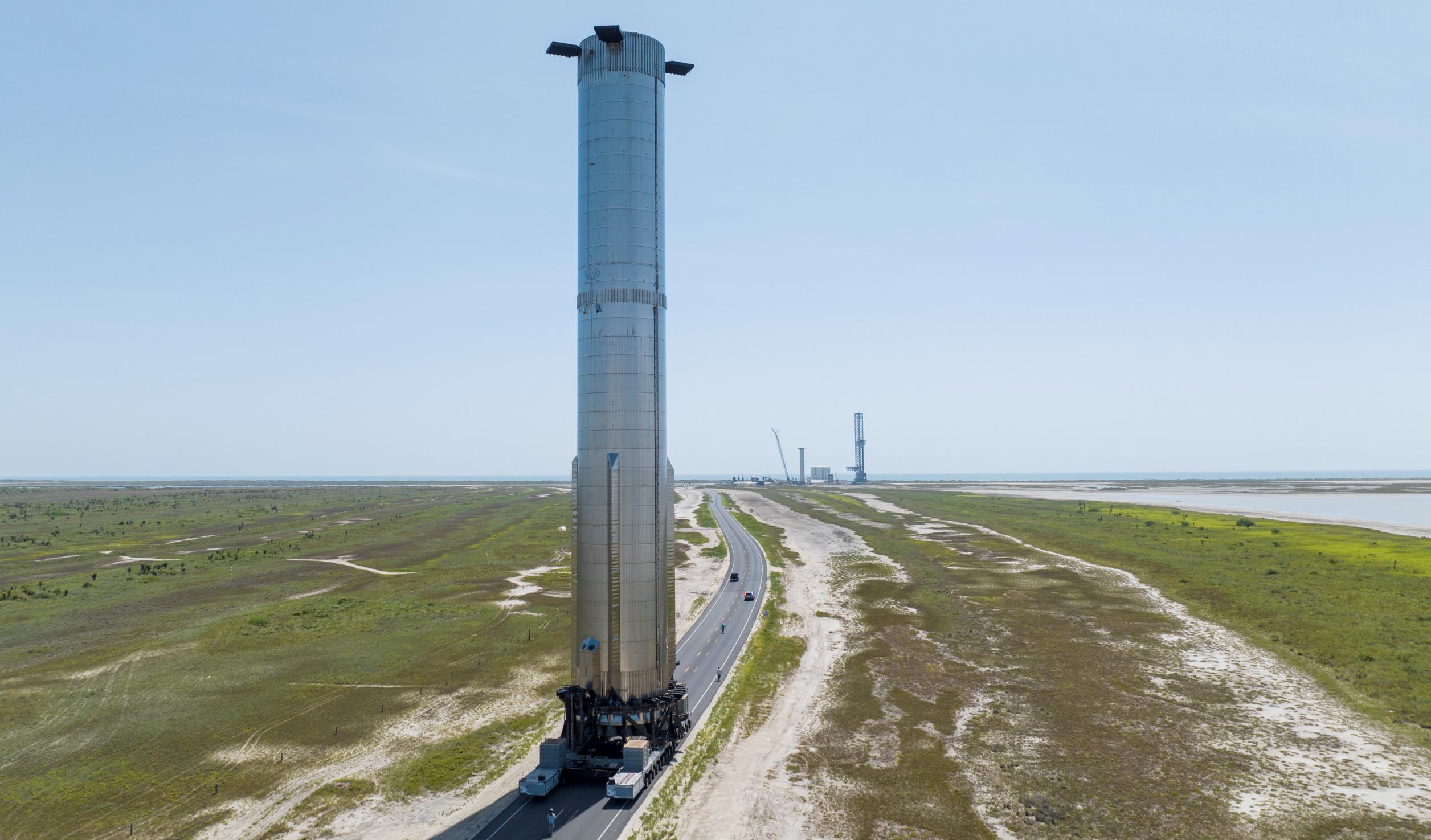 SpaceX has transported the most powerful rocket booster ever assembled to its Starbase orbital launch site (OLS) and used giant robotic arms to install it.

It’s not the first such trip for Starship’s Super Heavy first stage in general, nor for this specific booster, which is known as Booster 7 or B7. Booster 7 first headed to the pad on March 31st and successfully completed two major cryogenic proof tests, but was then severely damaged during a subsequent structural stress test. After a few weeks of repairs back at the factory, B7 rolled to the pad a second time and completed a third cryoproof test and returned to the factory on May 14th, where it stayed until June 23rd.

After almost six weeks of additional work, Booster 7 rolled to the launch pad for the third time – possibly its last trip.

Even Booster 7’s first rollout wasn’t unprecedented, however. In September 2021, Booster 4 – an earlier prototype with fewer engines, less thrust, and several other differences – arrived at the launch site with 29 Raptor V1 engines installed. Over the next six months, SpaceX slowly finished the booster, conducted a handful of proof tests, and eventually performed three ‘full-stack’ tests with Starship S20. For awhile, SpaceX hoped to eventually fly B4 and S20 on Starship’s first orbital launch attempt, but that plan never came close to fruition.

Booster 4 was particularly underwhelming and never even attempted a single static fire despite having all 29 of its engines fully installed and encased inside a shell-like heat shield. Thankfully, Booster 7 appears to have a much better chance of at least attempting one or several static fires, even if there’s no guarantee that it will make it through that test campaign in good enough condition to support Starship’s orbital launch debut.

That is likely because testing Booster 4, for whatever reason, just wasn’t a priority for SpaceX. Preparing Booster 7 for static fire testing, however, is clearly a front-and-center priority in 2022. With its heat shield and all 33 Raptors installed, Booster 7 will be ready to kick off static fire testing almost as soon as it’s installed on Starbase’s orbital launch mount.

According to CEO Elon Musk, Booster 7 will start by igniting just one or a few Raptor engines. SpaceX has never ignited more than six Raptor V1 engines simultaneously and never tested more than three engines at a time on a Super Heavy booster. That plan could have easily changed, however. Either way, Super Heavy B7 will be treading significantly new ground. Even before actual static fires begin, Booster 7 will also need to complete one or more wet dress rehearsals (WDRs), a test that exactly simulates a launch but stops just before the moment of ignition.

If SpaceX attempts a full wet dress rehearsal, in which the booster would be filled with more than 3000 tons (~6.6M lb) of liquid oxygen (LOx) and liquid methane (LCH4), it would be a first for Super Heavy and just as big of a test of the orbital launch site. Booster 7 will also need to test out its autogenous pressurization, which replaces helium with hot oxygen and methane gas to pressurize the rocket’s propellant tanks.

Several hours after Super Heavy B7 arrived (for the third time) at the orbital launch site, SpaceX used two giant arms attached to the pad’s launch tower to lift the ~70-meter (~230 ft) tall rocket onto the launch mount. While Musk says that the ultimate goal is to use those arms to catch Starship and Super Heavy out of mid-air, their current purpose is to take the place of the tall and unwieldy crane that would otherwise need to be used to lift either stage. The arms are an extremely complex solution but they do allow SpaceX to lift, install, and remove Starship stages remotely and insulate those processes from wind conditions, which cranes are sensitive to.

Once fully secured by the mount’s 20 hold-down clamps, the booster will be connected to ground systems and SpaceX can prepare B7 to start the next stage of preflight testing as early as Monday, June 27th.