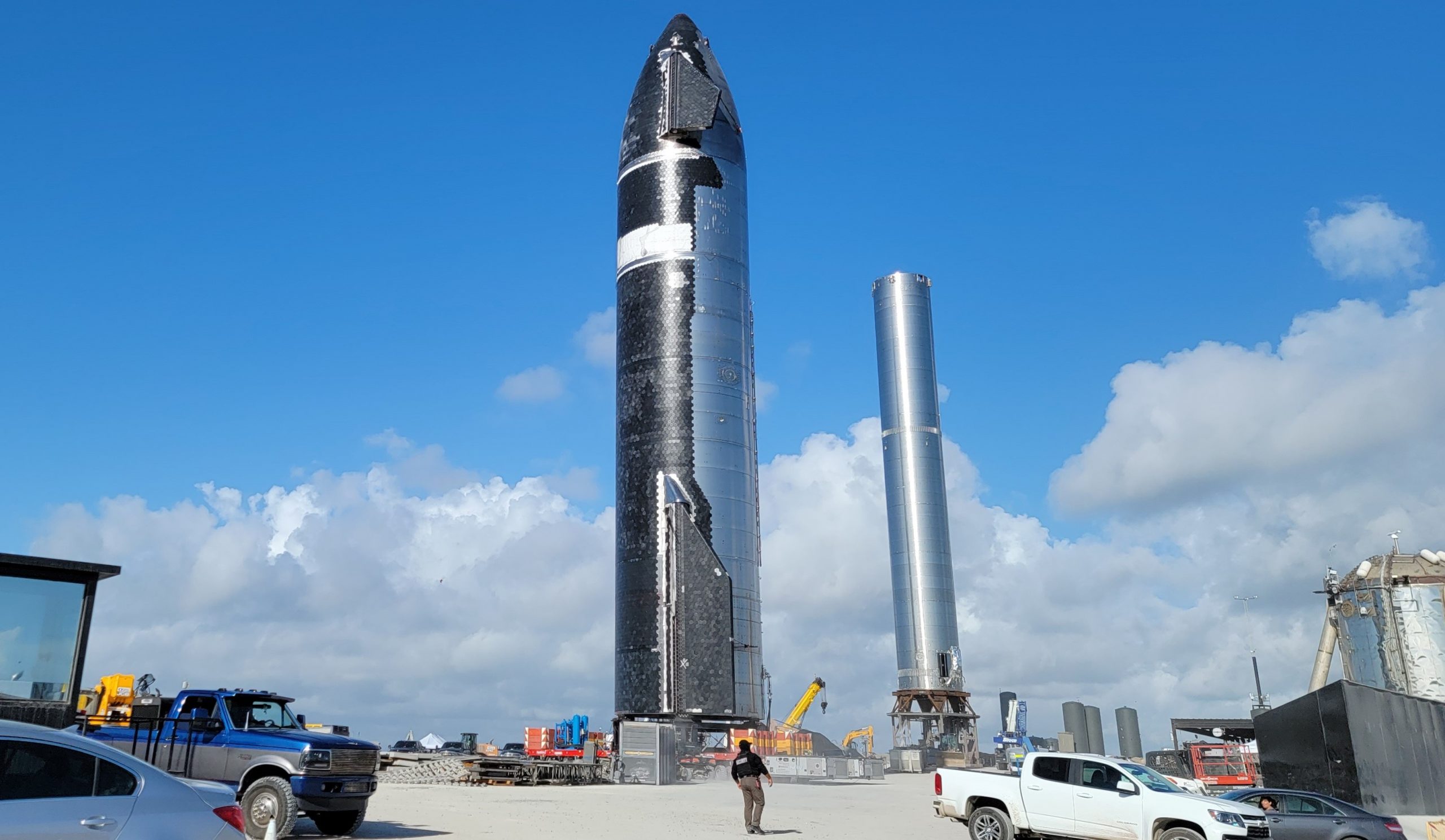 SpaceX could stack a Starship on top of a Super Heavy booster for the first time as early as Friday morning. (@StarshipGazer)

After a slight delay, CEO Elon Musk says that SpaceX is now on track to stack a complete Starship prototype on top of a Super Heavy booster for the first time ever as early as Friday morning.

In the latest stage of SpaceX’s continually impressive “Starbase Surge,” the company rolled the first orbital-class Starship prototype’s aft tank section from its birthplace in the factory “midbay” to a much larger “high bay” around noon on August 3rd. Mere hours later, Elon Musk revealed that SpaceX had fitted the Starship with a full six Raptors – a first for any Starship prototype, though Super Heavy Booster 4 technically beat it to the punch with the installation of a staggering 29 Raptor engines hours prior.

The rocket’s conical nose section joined it in the high bay later that evening and SpaceX wasted no time stacking and welding the two Starship halves together early on August 4th, effectively completing the basic structure of Ship 20 (S20). After a day of final integration work, Starship S20 left the high bay around dawn on August 5th and took to the highway for a brief trip from SpaceX’s Boca Chica factory to launch and testing facilities just a mile and a half to the east.

On August 3rd, Super Heavy Booster 4 – fitted with 29 functional Raptor engines – made the same trip from build site to launch pad, where it sat on the transporter overnight. On August 4th, with slightly calmer winds, SpaceX installed the immense ~69m (~225 ft) tall rocket booster on an orbital launch mount that itself had only been installed less than a week prior.

Ship 20 arrived at the orbital launch site a few hours after heading out and was eventually moved directly beside Booster 4 and the orbital launch mount and attached to the largest crane in SpaceX’s arsenal. After several hours sitting in one place, SpaceX announced over a sitewide loudspeaker system that all further stacking operations had been called off for the day, which Musk later confirmed on Twitter was due to wind conditions at the launch site.

Had the weather cooperated, SpaceX’s plan was to install Starship S20 on top of Super Heavy Booster 4, a feat that would have marked the first time a two-stage Starship rocket has ever been fully assembled. Due to the current setup’s temporary nature, SpaceX must complete that stacking process with a vast crawler crane – the same crane used to fully assemble a ~145m (~475 ft) tall Starship integration tower visible directly behind the rocket.

Sitting on top of the fairly tall orbital launch mount, Starship S20 and Super Heavy Booster 4 will stand about as tall as that 145m launch tower, though the booster and ship itself are expected to be just shy of 120m (~390 ft) from tip to Raptor tail. Once stacked, the vehicle will be the tallest rocket assembled in the history of spaceflight.