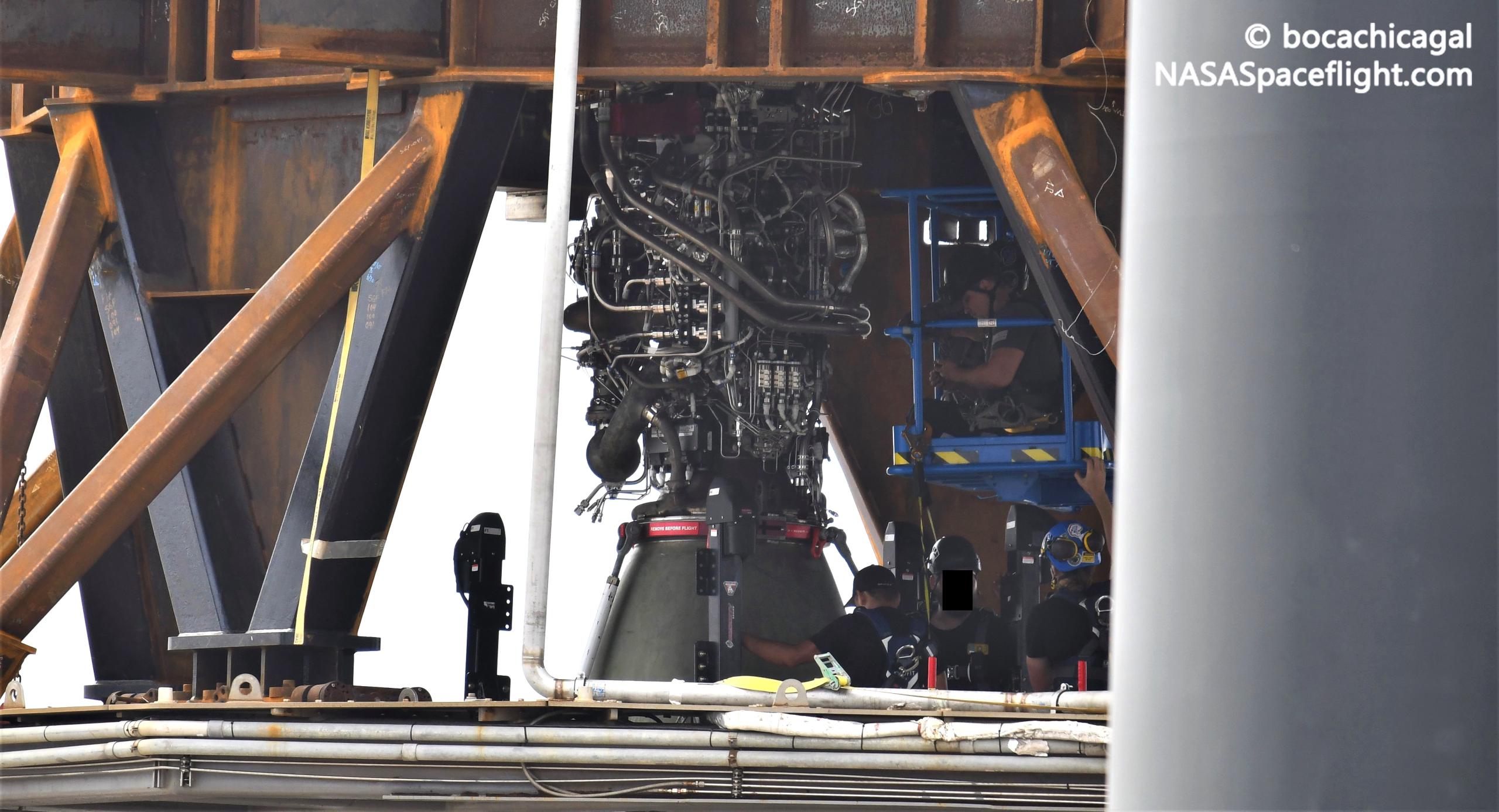 SpaceX technicians have installed a Raptor engine on a Super Heavy booster prototype for the first time. (NASASpaceflight - bocachicagal)

SpaceX has installed a Raptor engine on a Super Heavy booster prototype for the first time, defying expectations and setting the rocket up for two major tests as early as this week.

On Thursday, July 8th, SpaceX briefly filled Super Heavy Booster 3’s (B3) propellant tanks with benign nitrogen gas. The vehicle seemingly came to life for the first time that morning when it was spotted using its tank vents – a generally incontrovertible sign that the complex mechanical system that is a rocket is functional. Later that day, the public highway and beach adjacent to SpaceX’s launch site were briefly closed for what was expected to be an ambient pressure and/or cryogenic proof test.

Booster 3 never got to the cryogenic proof test – easily confirmed thanks to the frost that forms on most rockets’ exteriors as main tanks are filled with extremely cold liquid nitrogen. No such frost formed, no major venting occurred, and the road was only closed for the first two hours of a six-hour test window.

According to Next Spaceflight’s Michael Baylor, SpaceX did complete a “brief ambient proof” during that relatively short closure, though very little activity was visible during the test. Friday’s 14-hour test window was canceled the next morning, leaving SpaceX the rest of the weekend to prepare the first functional Super Heavy booster for its first truly challenging test – cryo proof.

Instead, late on Saturday, July 10th, SpaceX rolled Raptor 57 (R57) from build site to launch pad and began installing the engine on Booster 3 just a few hours later. Prior to Raptor 57’s installation, most prominent (albeit unofficial) voices in the SpaceX fan community anticipated no more than cryogenic proof testing for Booster 3 – no static fires, in other words.

However, it was fairly apparent that Super Heavy Booster 3 and the modified suborbital launch mount it was installed on were both outfitted for testing more complex than a cryo proof alone. Notably, B3 rolled to the pad with multiple labeled methane pressure vessels (COPVs), extensive plumbing, and autogenous pressurization control panels installed – all of which continued to be actively worked on after the booster was installed at the launch site.

While it’s technically not impossible to build a ground testing Starship prototype that’s capable of a wide variety of tests but never actually used to its full extent, doing so would be well out of character for SpaceX and make little sense in general. As such, it’s not a major surprise that SpaceX has now begun to install Raptor engines on Super Heavy Booster 3. What is surprising is that SpaceX is installing Raptor engines on a first-of-its-kind Super Heavy prototype before any fully integrated booster has completed cryogenic testing.

Based on Starship’s ~18-month test history, there is a real possibility Super Heavy B3 will fail during cryogenic proof testing. Even accepting that SpaceX’s testing processes and expertise have matured dramatically after dozens of Starship tests on the ground and in flight, the chance remains. In other words, SpaceX’s decision to begin installing Raptors on Super Heavy before ensuring structural and mechanical integrity implies some combination of unusual confidence in a prototype as unproven as Booster 3 and a distinct lack of concern at the prospect of losing at least two Raptor engines in a hypothetical test failure.

Knowing SpaceX and CEO Elon Musk’s goals for Raptor, the latter implication isn’t much of a surprise but it’s always interesting to have direct visual evidence that Raptor is, in fact, so cheap to build and easy to install that the minor effort and few days of possible delays required to reduce the risk of losing multiple engines just aren’t worth it.

As such, it’s now clear that Super Heavy Booster 3 will have at least one or two Raptor engines installed during its very first cryogenic proof test – currently no earlier than 12pm to 8pm CDT (UTC-5) on Monday, July 12th. Assuming SpaceX’s confidence is well-placed and Booster 3 passes its first cryogenic tests without issue, the real question now is how many Raptors will be installed and ignited during Super Heavy’s first static fire test?