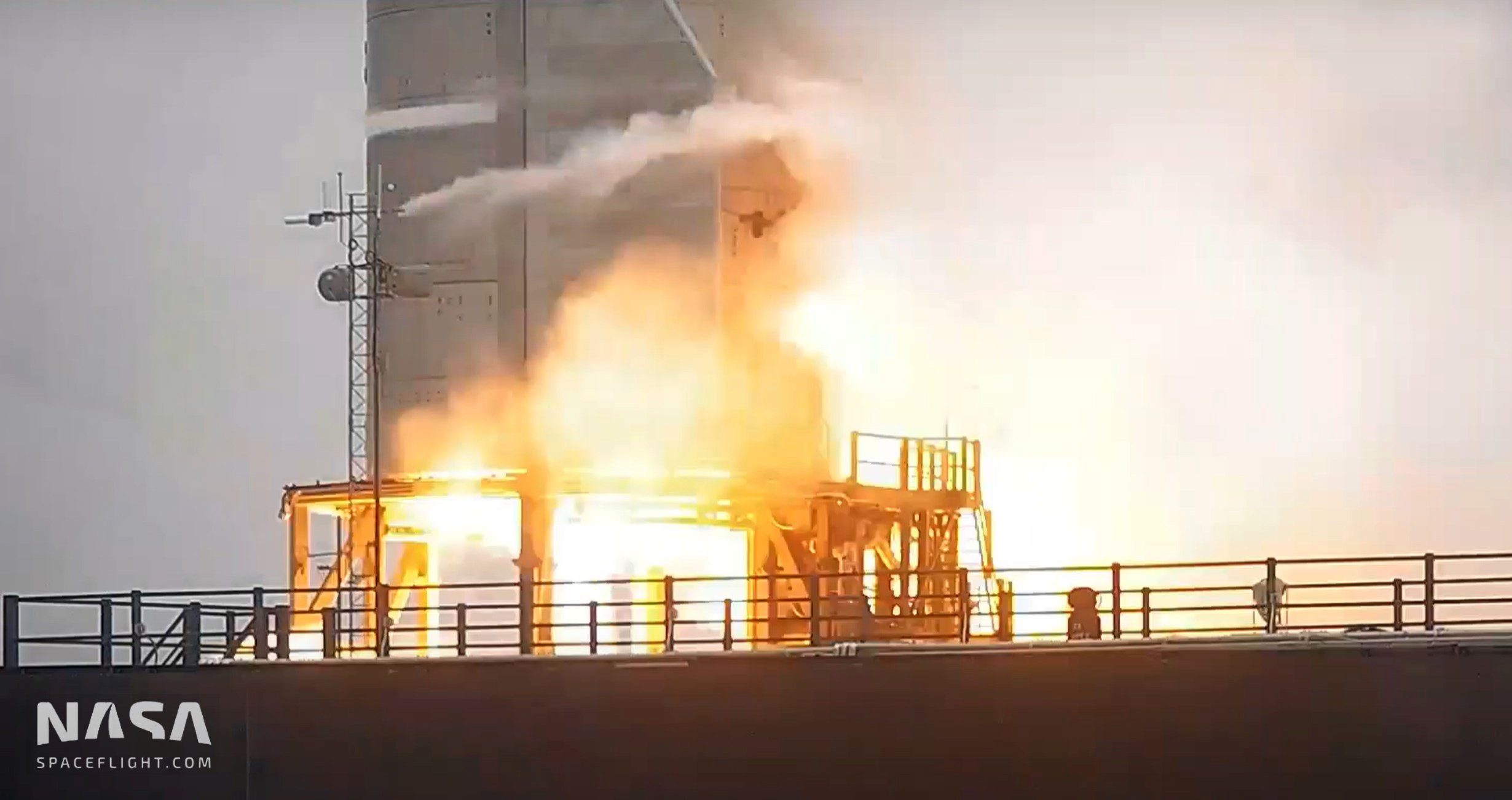 SpaceX has fired up Starship SN15 for the second time in ~24 hours. (NASASpaceflight.com)

SpaceX Starship prototype SN15 has completed a second ‘static fire’ test of its Raptor engines in the last 24 hours, hopefully setting up the rocket for a launch and landing attempt on Thursday or Friday.

While Monday’s test was a total success, it’s unclear if April 27th’s static fire went according to plan. Notably, it was much shorter than the Monday engine test and involved either one or two – but not all three – of Starship SN15’s Raptor engines. Historically, unusually brief static fires (~2-3 seconds) aren’t unprecedented, but they’ve generally been part of a process of troubleshooting after a prototype runs into technical issues during earlier testing.

According to Musk, SpaceX also moved to reigniting all three sea level Raptors for landing burns from Starship SN10 onwards, meaning that an intentional two-engine SN15 static fire is either a reversion to earlier two-engine landing burns or a sign of a static fire abort or engine ignition failure. If SpaceX needs to perform another test, particularly if one or more Raptors need to be replaced, Starship SN15’s launch will likely slip into early May. Stay tuned for updates.

SpaceX CEO Elon Musk says that the next Starship launch could happen “later this week” after the company’s first ‘upgraded’ prototype aced a three-engine static fire test on the first try.

While substantially delayed from optimistic initial targets just a week or two after the rocket rolled from factory to launch pad, upgraded Starship prototype serial number 15 (SN15) – outfitted with “hundreds of improvements” – fired up its three Raptor engines for a few seconds around 5pm CDT on Monday, April 26th. Also upgraded, the rocket’s engines seemed to perform nominally and SpaceX ultimately closed out the evening’s testing a few hours early.

Around the same time as SN15’s first static fire attempt was wrapping up, SpaceX distributed safety notices to Boca Chica Village residents, indicating that a second static fire test may be planned on Tuesday. Musk didn’t mention plans for a second static fire, but he did imply that the first test was completed successfully enough to enable Starship SN15 to launch just a few days from now.

Like four other “high-altitude” flight tests before it, Starship SN15 is expected to target a similar ~10-12 kilometer (6-8 mi) apogee and once again attempt to perform a complete ascent, controlled bellyflop, landing flip maneuver, and soft touchdown. Between December 2020 and April 2021, Starships SN8 through SN11 tried and failed to survive that challenge intact, though prototype SN10 did manage to survive for around ten minutes on the ground before its still-hard landing led to an explosion.

All four failures ultimately had different causes. Starship SN8 lost fuel tank pressure, starving its Raptors and causing a near-total loss of thrust seconds before touchdown. One of SN9’s Raptors failed to ignite for a landing burn, triggering an even more aggressive impact with the ground. Starship SN10 landed in one piece but its lone landing engine underperformed when it began to ingest helium ullage gas – a quick-fix implemented after SN8’s pressurization issue. SN11 exploded almost immediately after attempting to ignite its three engines for landing, failing even earlier than its predecessors.

All four flight tests saw each respective Starship prototypes narrowly miss a fully successful and survivable landing, providing SpaceX a great deal of data and direct experience to improve the rocket’s design and operations with. Two of the four failures – SN9 and SN11 – appear to have been the fault of one or more of Starship’s three Raptor engines. Beginning with Starship SN15, SpaceX has moved to an upgraded iteration of the next-generation engine, raising hopes that whatever changes the company has implemented will substantially improve reliability and thus the odds of a successful high-altitude launch and landing test.

As of April 26th and in spite of one or two weeks of delays, the fact that Starship SN15 managed to complete a three-Raptor static fire test on its first true attempt is a great sign that the rocket’s many “improvements” may already be paying dividends. A launch “later this week” would make the effects of those improvements even harder to deny. A successful launch and landing in the next few days would all but guarantee that SpaceX’s process of iterative development is working like a charm. Regardless of whether SN15 survives its first flight, Starship SN16 will likely be ready to take over a matter of days later.