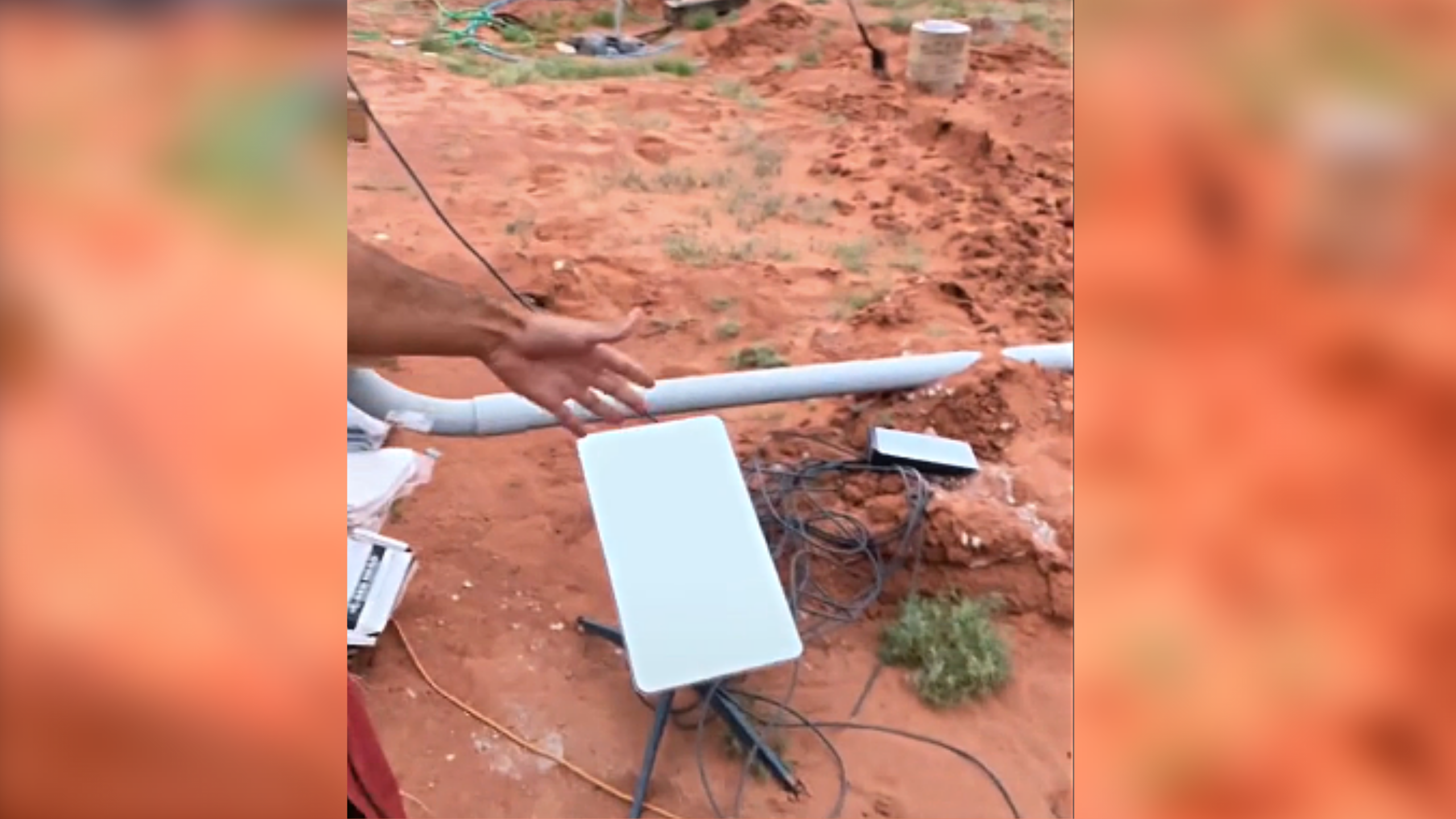 Starlink keeps this former Tesla employee online in the desert

Starlink is keeping everyone connected, including a former Tesla employee who went viral on TikTok for his dome in the desert. While using the app, a viral video by Always Kenny popped up on my For You Page. He’s known on the app as the hole guy or the dome guy.

In the video, Reid explained how he was able to have internet while living in the desert. I thought his story would be great to share here and I asked him to share it with me.

From Tesla to the desert

Reid told me that he was working for Tesla after he’d finished college and left Tesla to work for a few startups here and there. However, he wasn’t fulfilling his purpose in life just yet.

“I kind of knew that there was something bigger–more different that I wanted to do. Covid hit and Tesla stock shot up so I drove around the country looking for a place to settle down. A place that wasn’t Seattle or San Francisco.”

While working at Tesla, Reid purchased a Model 3 and was one of the first people to actually live out of his Tesla.

“I did that for about a year. That’s how I saw the country. I did a loop through the West Coast, saw the national parks, and then I did a loop going through the South, sleeping at Superchargers.”

“Weirdly enough I came out here and fell in love with this place, dug a hole and put a dome in it and the rest is history. It’s still being written.”

Reid has made his home in the desert and went viral on TikTok when he built the dome. He asked viewers for feedback and has gotten a lot of great tips on how to make his dome efficient and better.

Although Reid lives in the dome, he told me he does go to civilization, however, this is where his heart is. It’s his home.

Starlink in the desert.

Reid has had Starlink since he first decided to make his home in the dome.

“I had Starlink since I got here. I was on the waiting list and luckily, right before I came out, they sent me the satellite dish. It was actually waiting here in mid-March when I came out. It was an essential part of me doing this entire thing.”

“Going somewhere this remote, it was super important that I stay connected to my friends, family, and the outer world, in general. I couldn’t have done this last year.”

“That’s great news. I would love to be able to drive around and never lose service. I’ve spent so much time on the road that I have to have my playlist downloaded so I end up listening to the same song over and over again. It’s not worth the pain of going through service challenges.”

The new Starlink and T-Mobile service is what Reid is the most excited about, he said. It takes him two hours to get to the grocery store and the majority of that is out of service.

“So to be able to still call people and move things forward with my life while on the road out here, that’s going to be huge.”

Some of the challenges of living in a dome in the desert.

Some of the challenges Reid has faced head-on include extreme heat and staying cool. He’s also seen a few scorpions and snakes here and there–but nothing poisonous, yet.

“It’s been nothing but challenges but that’s kind of why I did this. I knew that putting a dome that I bought at Walmart for $600 in a hole that I dug with pretty much no other preparation was going to be a little problematic.”

“But right now, I’m fixing a problem where the sand is caving into the sides of the dome and making all the beams snap and bend. In its current state, it wouldn’t last very long. So I’m currently putting some wood around the side. I actually made a video asking TikTok for help and people have really good suggestions on reinforcing the dome to make it last longer.”

“It just makes me appreciate any building and structure that people live in so much more. It’s been eye-opening.”

The heat is another challenge. Although he expected it to be hot in the desert, it’s actually hotter inside the dome.

While waiting for things to cool off, Reid has kept himself busy and cool by digging out another hole and making it into a pool.

“I dug a pool one night and put some tarps in the bottom of it and put another dome that I built over that. It’s created an indoor shaded pool which has been nice for hanging out during the day. I also bought an umbrella.”

Reid’s story is one of many provided by Starlink users. I’ve received a lot of feedback on my Starlink-related articles with people sharing their stories or wishes for Starlink to be available in their rural areas.

One of our readers told me that before Starlink, he couldn’t find cost effective internet service. “Thanks to Elon Musk he has made a difference in rural communities.”

Another one of our readers, a doctor, told me that they’ve been a rural Starlink client for over a year. “This service is akin to early man discovering fire or the wheel. Two children and an adult all zooming for college and work while recording other digital items with no issues is our new life.”

The doctor noted that the regulatory authorities who oversee Starlink have grossly misjudged Starlink. I believe he’s referring to the Federal Communications Commission’s reversal of Starlink’s $885.5 million infrastructure award. SpaceX is currently appealing the FCC’s reversal of the award and even FCC Commissioner Brendon Carr called out the agency for denying Starlink’s award.

I agree with the doctor, Commissioner Carr, and SpaceX. Starlink, in my opinion, will not only keep people connected but save lives during disasters. I’ve spoken about being without communications during hurricane Ida’s aftermath. And in my interview with Elon Musk, he emphasized the importance of Starlink as a life-saving tool. Elon told me,

“That’s obviously extremely helpful for rescuing people and people being able to ‘I need to I need help. I need rescue.’ It’s like how do you find them? How do you communicate with them? Starlink can and has provided that in a number of situations.”

Starlink keeps this former Tesla employee online in the desert