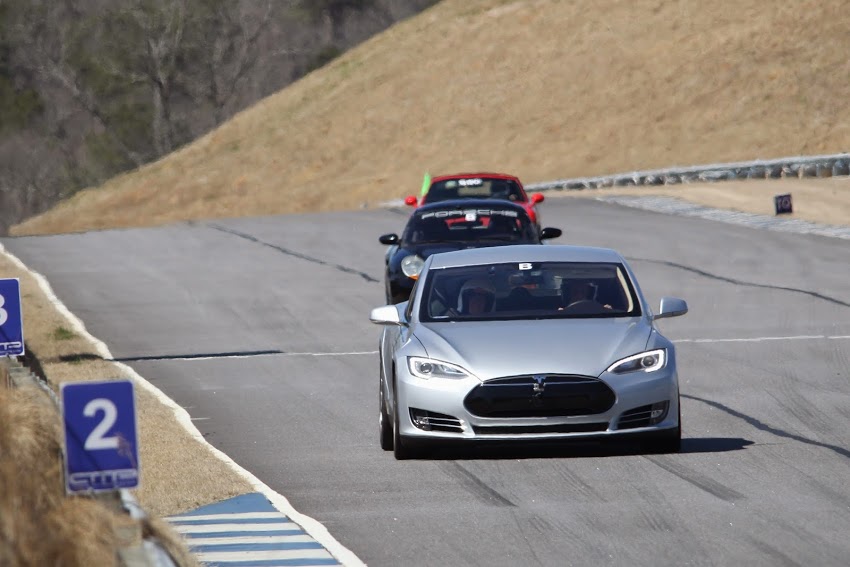 NZ – Taking a Model S to the track is something everybody secretly wants, but don’t always dare. What made you decide to do it?

JT – Track days at an high performance driving event (HPDE) is fun. There is no wheel-to-wheel racing, and passing is only with point-bys, so the risk of an accident is pretty minimal. I just need to keep the car on the track. The goal isn’t the ultimate speed but rather to have fun, and improve your skills. I’m not driving at the limit of the abilities of either the car or myself.

I have always been a motorsports fan, as well as games like Gran Turismo. I’ve always wanted to do it, but never had the combination of time, money, and an appropriate car. Last year, I heard that the local Ferrari dealership was looking for more people with exotic cars for Rides to Remember, where you take kids undergoing cancer treatment on laps around the Atlanta Motorsports Park track. I decided to go. The kids were amazing. One of them suggested we could sneak up on the car in front and pass him since the car was so quiet and he would never know we were coming. It was a lot of fun, even though the laps weren’t terribly fast. As soon as I got home, I looked into doing it again and found Hooked on Driving was running an event a month later at the same track. I signed up.

NZ – How much work did you put into preparing your Model S to be track ready?

JT – The first time around, absolutely nothing. I wasn’t sure how well it would work on the track or if I was going to do this more than once. I drove it with the stock all-season tires, stock brakes, etc, but I was hooked after that trip. I researched tire options and bought a set of g-Force Rivals and BBS wheels. That made a huge difference! I was 10mph faster and could brake 100ft later at the end of the straight. They didn’t even get that greasy feel after driving hard. Since then, the only other modification I made was to switch brake fluid to ATE Amber (a higher boiling-point fluid). The stock brakes are Brembo and don’t have any fade even after repeated 120->40 braking zones. The stock air suspension keeps the tires planted pretty well, and with the low center of gravity, there is very little body roll. The stock seats aren’t racing seats with 5-point harnesses, but they are sturdy and provide plenty of support. Put it this way, I don’t have to brace myself with the steering wheel or my leg when cornering hard..

If I could upgrade the drivetrain cooling system (see below) without compromising everyday use, I probably would do that, but there really isn’t much else to do.