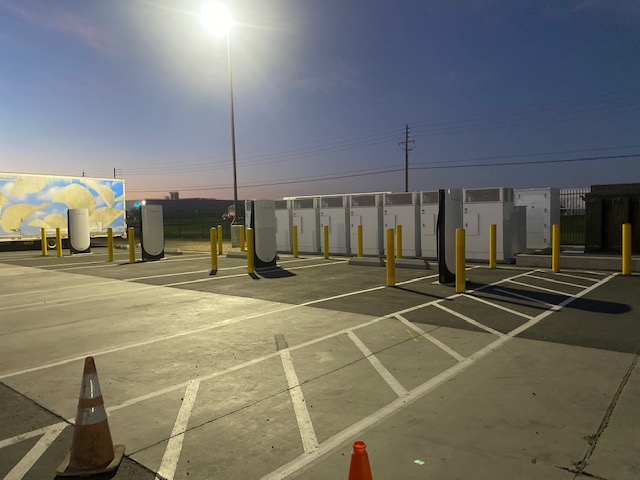 Frito Lay has an additional Megacharger on site. (Credit: Ricardo)

Tesla has installed an additional Megacharger at Frito Lay and PepsiCo.’s facility in Modesto, California, in preparation for the company’s 100 Semi unit order.

Frito Lay, a subsidiary of PepsiCo., finalized an order for 100 Tesla Semi trucks in 2017. As the development of the Semi continues and production nears, the truck has been spotted on public roads several times this week.

Today, Teslarati obtained exclusive photos of the Semi from a reader named Ricardo, who has been at the Frito Lay facility for the past week. The Semi has evidently been at the facility all of this week for testing, with employees indicating it is “coming soon.” However, with an increased presence of the Semi at the plant and the 100 unit order the company already has, an additional Megacharger unit has been spotted on site.

One of the purposes of the Semi being on-site was to test the Megachargers at Frito Lay’s facility, which will be used to charge the 100 Semis that will eventually grace the property in Modesto. Tesla has installed an additional Megacharger based on the new photos sent to us. In January, The Kilowatts showed that Frito Lay had three Megachargers on-site, so the expansion of chargers continues.

The Megachargers have been making their rounds at various facilities in Tesla’s network of owned properties and clientele locations over the past year. In October 2021, a block of Megachargers was spotted at Gigafactory Nevada, with Sawyer Merritt, a Tesla insider, indicating that the chargers were installed for Semi test runs in between the Sparks, Nevada plant and Fremont. It was not necessarily an indication that production was moving closer, but more of a reflection of Tesla’s nearly-magnified testing process for the class-8 truck.

2022 basically was a year for Tesla to maintain its product roadmap and look for 2023 to be a time for new releases. CEO Elon Musk said during the Q4 2022 Earnings Call that Tesla would not release any new products this year. Supply chain issues have compounded Tesla’s order log, which has lengthened due to increased demand. Prices continue to increase while orders get pushed back, which basically eliminates the possibility of new developments.

Despite this, the Semi could make a limited appearance at some capacity in the near future, especially as Frito Lay employees are confident the truck will make it to the fleet soon.

The Megacharger could provide the Semi with an impressive 500 miles of range per hour thanks to over 1 MW of power that could shuttle driving range at record speed.