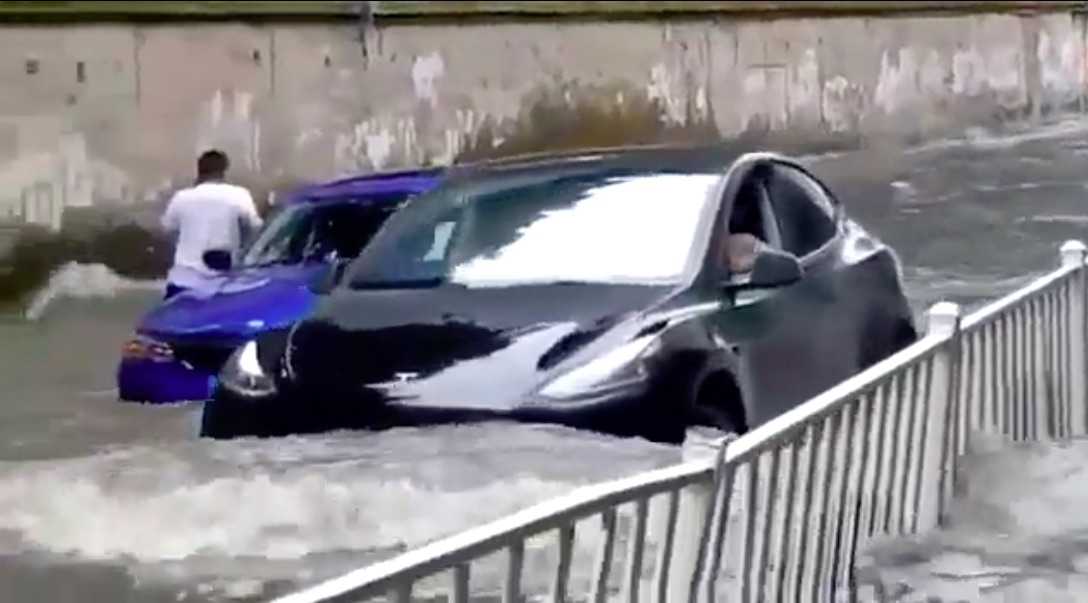 Teslas are capable of impressive feats. They’re advanced enough to navigate themselves from a highway on-ramp to an off-ramp using Navigate on Autopilot, and they’re able to protect their occupants even in frightening crashes.

Over the years, Tesla has also garnered a reputation for building vehicles that surprisingly hold up well during floods. This is especially the case in China, as the country is typically hit by a number of typhoons and substantial rainfall every year.

So notable are the rains in China that Gigafactory Shanghai utilizes a flood simulator to test its locally-produced Model 3 and Model Y. The company’s vehicles have performed well over the years, with local social media platforms being filled with amazing videos of Teslas like the Model 3 surviving deep floodwaters.

A recently shared video on social media, however, stands out pretty well. The video was brief, but it immediately showed another vehicle — a blue sedan that seemed to be an ICE car — already stranded in a rather deep flood. A Tesla Model Y then came into the frame, easily navigating the floodwaters that stranded the other car.

Elon Musk appreciated the video, with the CEO giving the clip a thumbs up on Twitter. Musk has been pretty open about Teslas’ flood-wading capabilities in the past, though he also highlighted that owners should be extremely cautious when driving over water.

The Model Y’s behavior in the recent flood video from China is very similar to other Teslas that have been recorded attacking deep waters in the past. Last year, a viral video from China emerged showing a Tesla driver seemingly flooring a Model 3 amidst rising floodwaters.

Later details from the incident indicated that the Tesla Model 3 had been in a tunnel with other cars when floodwaters came in. The water reportedly rose so quickly that other vehicles were immediately stranded. With other cars getting trapped in the tunnel, the Model 3 driver decided to drive out of the area as quickly as possible, resulting in the viral video of the vehicle.