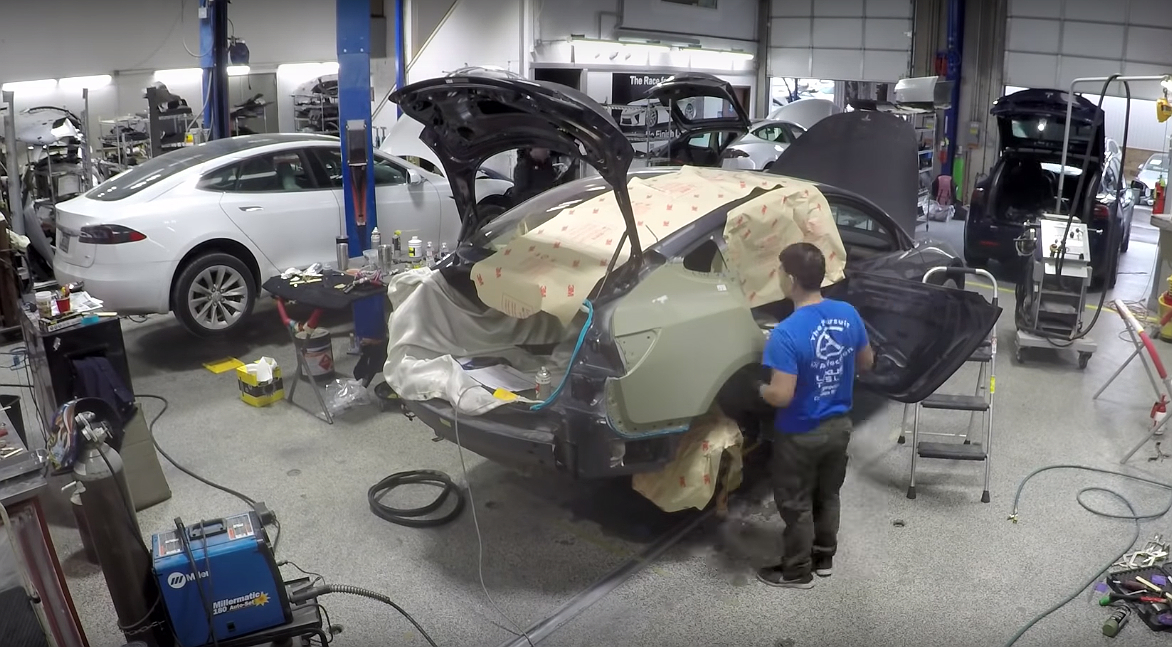 Tesla-certified body shop, Autocraft Bodywerks based out of Austin, TX, has showcased just how much work goes into repairing and restoring a damaged Tesla Model 3 in a time-lapse video posted to YouTube. As could be seen in the video, workers of the body shop spent several days replacing Model 3’s rear-quarter body panel that was damaged in an accident.

According to Autocraft Bodywerks, the process of restoring a damaged Tesla back to showroom condition takes specialized training in aluminum welding and adhesive and mechanical joining technology used in the construction of Tesla vehicles. These skillets were highlighted in the company’s documentation of its recent Model 3 repair project, where the shop’s workers could be seen taking deliberate care in fitting, setting, and painting a new body panel.

Tesla’s Model S and Model X are made almost entirely of aluminum. While aluminum has several advantages over steel, such as lighter weight, stellar absorption of energy during collisions, and higher corrosion resistance, the material is also notoriously difficult to work with. Thus, Tesla requires factory training and specialized equipment before a body shop could be certified for repairs and restoration. Repair costs of the company’s vehicles are expensive as well. A Model S owner from the Tesla Motors Club forum, for example, stated that a minor damage on his vehicle’s rear passenger door was quoted $4,422 by a certified body shop. A picture of the damage could be viewed below.

It’s not just costly repairs that are giving Tesla owners difficulties, either. Tesla owners have also dealt with long wait times for their vehicles’ repair work to be completed, especially if body panels need to be replaced. Johnny, a Model S owner, for one, described his painful “Repair nightmare” story in Teslarati’s forum, stating that he had to wait months as the repair shop waited for parts to arrive from Tesla’s factory.

Repairing Tesla vehicles are set to improve soon, however. During Tesla’s 2018 Annual Shareholder Meeting, Elon Musk discussed the expansion of Tesla Service Centers and authorized body shops. Musk also stated that the company is also in the process of creating Tesla body shop repair locations, which are expected to be ready by the end of the month in several key locations across the United States.

“We’re rapidly expanding service centers. Year over year, probably see a doubling of service center capacity for Tesla. We’re making major progress on the body-shop front. This is quite a big deal. We’re creating Tesla body shop repair locations. We should have by the end of the month in at least the Top 10 metro areas in the US being able to be serviced by a Tesla body shop. This will be a dramatic improvement in the cost and time of body repair,” Musk said.

This is not all, however, as Musk also noted that eventually, Tesla owners could soon experience the convenience of having same-day body repair services. According to Musk, owners could expect an improvement in the time it takes approved body shops to repair vehicles.

“In fact, we think we might be able to do for a lot of them same-day body repair. It’s definitely possible. I think we want to aim for maybe some number of body repair to be same-day. Whereas if we go to a third party, best case is about a week, and some cases, it’s several weeks. We’re basically just taking our biggest service centers, adding an annex for body repair and pre-stocking the parts, so you don’t have to wait for the parts to come from the factory,” Musk said.

Tesla’s 2018 Annual Shareholder Meeting proved to be highly successful for the electric car and energy company. During the meeting, Musk and Tesla’s executives related several pieces of good news to shareholders, from upcoming free trials on Autopilot, the growth of Tesla Energy, and positive updates on the Model 3 production line.