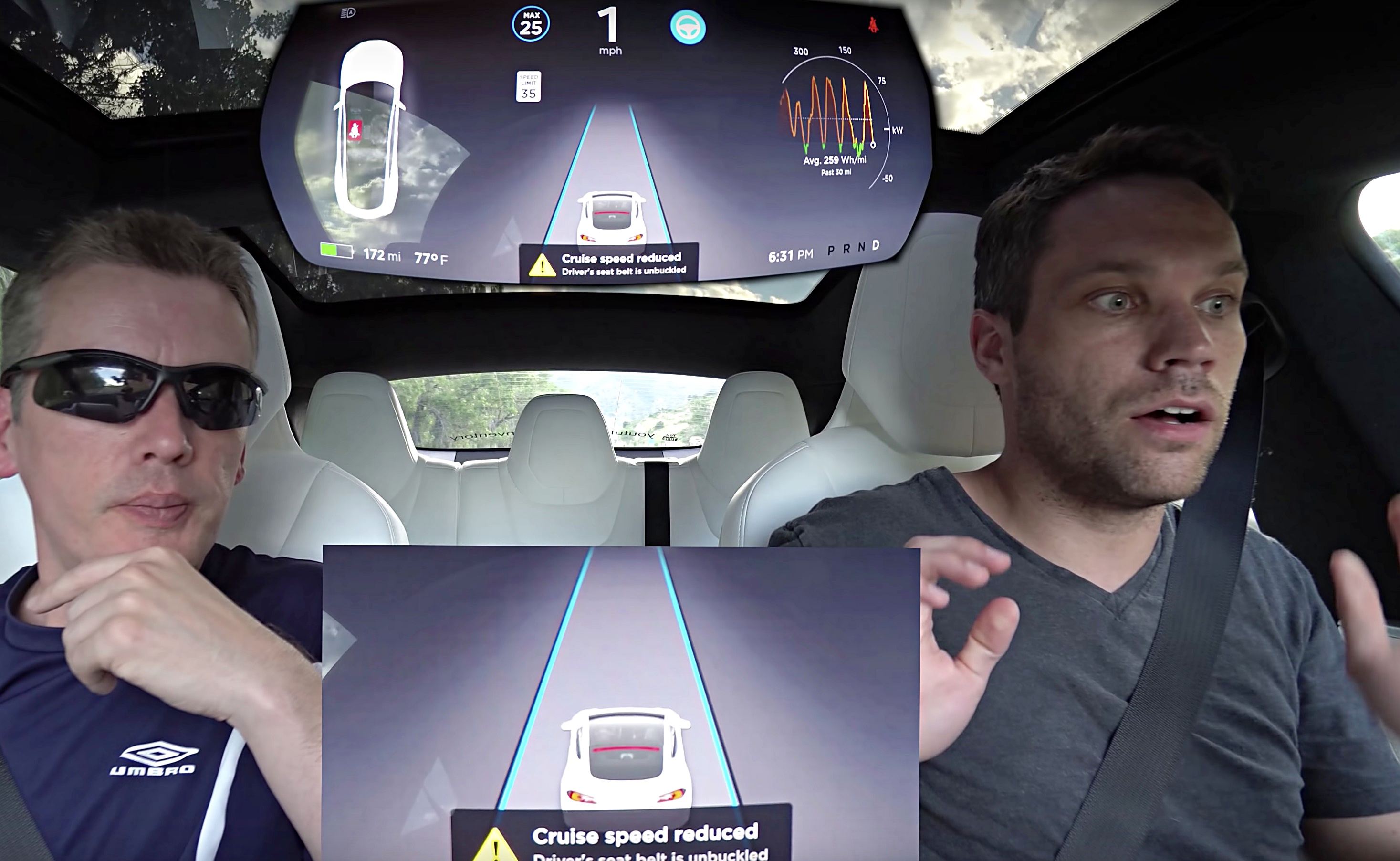 Tesla owner-enthusiast Erik Strait, otherwise known as DÆrik on YouTube, recently conducted a brief test on how Tesla’s Autopilot system reacts to a number of driver misuse. Strait’s tests involved actions such as unbuckling the seatbelt while Enhanced Autopilot is engaged, taking the pressure off the driver’s seat while the vehicle is moving, as well as backing up with the seatbelt off. His Tesla Model S, which at the time of testing was on software v8.1(2018.21.9), reacted in ways that were both expected and unexpected.

The owner-enthusiast first attempted to find out how Autopilot would react to the driver’s seatbelt getting unbuckled while the vehicle is moving under Enhance Autopilot. Immediately after the YouTuber removed his seatbelt, the Model S slowed down the car while engaging its visual and audio warnings. The vehicle remained engaged in Autopilot, however, and as soon as the seatbelt was buckled back on, the car started accelerating, still with Autosteer engaged.

Quite interestingly, when the seatbelt was unbuckled, Autopilot slowed the Model S down, but it did not completely stop the vehicle. Instead, it maintained a 1 mph speed that the YouTube host described as jerky. Once he took his weight off the driver’s seat, however, the electric car immediately shifted to Park.

Unbuckling the seatbelt while a vehicle is moving is among the most dangerous actions that a driver can take while driving. Being a car engineered around safety, the Model S, together with Tesla’s other offerings, are designed to react to specific scenarios on the road. If any, Erik’s observations on Autopilot’s behavior when he unbuckled his seatbelt is represented in the vehicle’s Owner’s Manual, which noted that driver-assist features such as Traffic Aware Cruise Control (TACC) would be on Hold when the electric car detects drivers’ seatbelts being removed.

“Under the following circumstances, Traffic-Aware Cruise Control goes into a HOLD state instead of resuming, and the instrument panel displays a message indicating that you need to resume cruise control: The driver’s seat belt is unbuckled.”

Tesla is continuously in the process of improving the safety features of Autopilot. With update v8.1(2018.21.9) alone, the electric carmaker opted to increase the frequency of Autopilot alerts that remind drivers to put their hands on the steering wheel. With the most recent version of the electric car’s software to date, v8.1(2018.24), Tesla also introduced a new wording to Autopilot’s alerts, featuring a message that advises drivers to “Apply light force to steering wheel.” In a recent tweet, Elon Musk further noted that an upcoming update would start allowing drivers to lower the position of the white flashing lights of Autopilot’s alerts on the Model S and Model X’s instrument panel, enabling them to see the warning lights regardless of their seating and steering wheel position.

Watch Erik’s recent Autopilot tests in the video below.