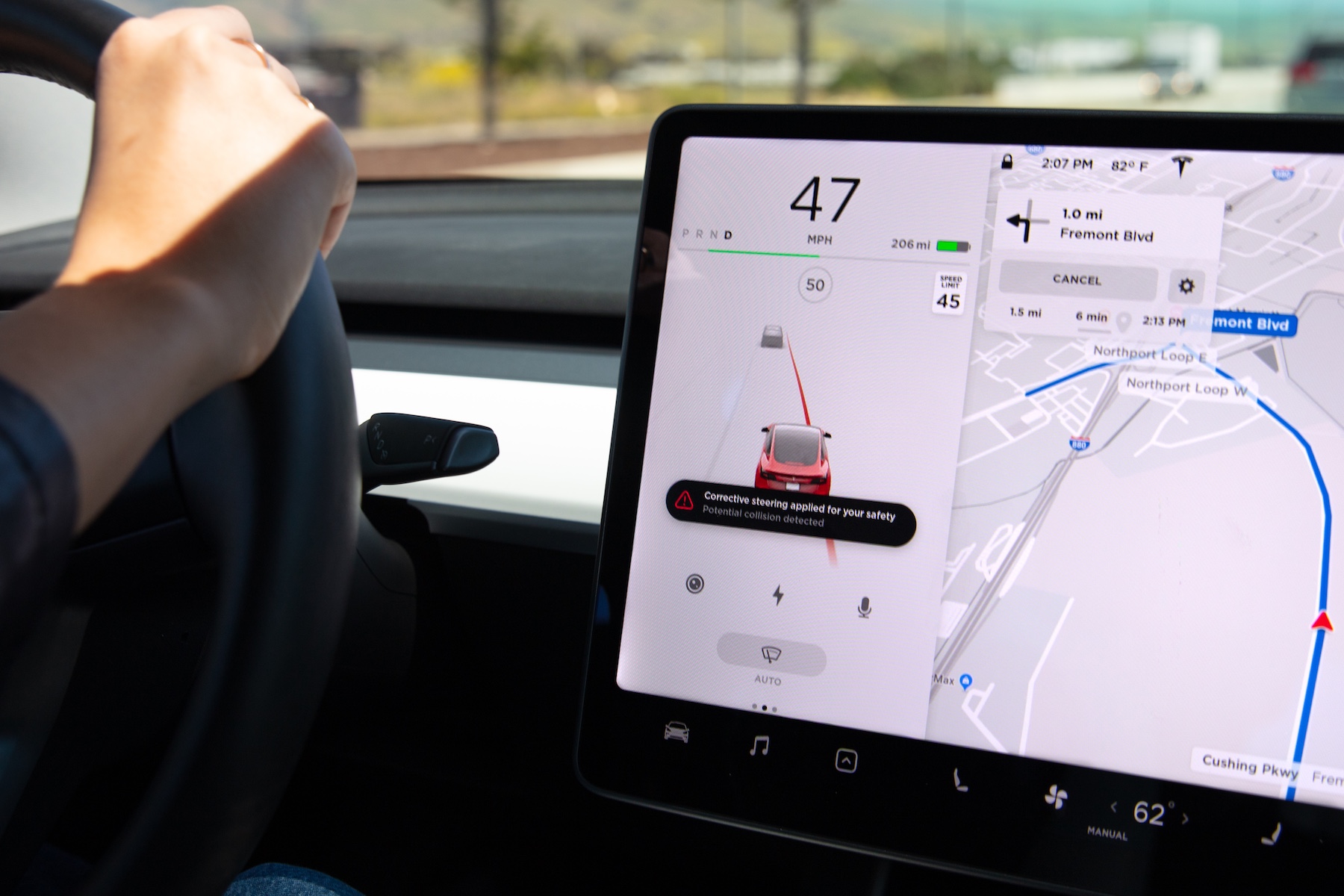 Tesla has introduced two new active lane monitoring features designed to help prevent drivers from unintentionally leaving their lane of travel as part of its safety-first mission to reduce vehicle accidents. The two features, named ‘Lane Departure Avoidance’ and ‘Emergency Lane Departure Avoidance’, are derived from Autopilot, yet work while it’s not on, and are being rolled out to all Model S, Model 3, and Model X customers worldwide with vehicles built after October 2016.

The Lane Departure Avoidance feature is an extension of Lane Departure Warning and applies corrective steering to keep drivers in their intended travel lane if a departure is sensed without a turn signal. It also monitors whether a driver’s hands are detected on the wheel and sends a series of reminders and alerts if not, similar to the warnings issued to Autopilot users. Additionally, if Traffic Aware Cruise Control is in use and hands are not detected on the wheel, the car will gradually slow down 15 miles below the speed limit or car’s set speed and turn the hazard lights on. The feature is optional and works between 25 and 90 mph.

Emergency Lane Departure Avoidance is automatically enabled and is designed to return a Tesla vehicle back to its original lane if a departure and an imminent collision are detected. The automatic steering will also come into play if the car is nearing the edge of a road. This version of Lane Departure Avoidance is turned on at the beginning of each drive and can only be turned off via the Autopilot Controls menu for single drives.

Tesla’s safety data indicates that these types of features may be effective for preventing accidents when Autopilot is not in use.

A blog post on Tesla’s recent Lane Departure Autopilot security features was published, a copy of which can be found below:

More Advanced Safety for Tesla Owners
The Tesla Team May 2, 2019

While no car can prevent all accidents, we work every day to make them less likely to occur. The massive amount of real-world data gathered from our cars’ eight cameras, 12 ultrasonic sensors, and forward-facing radar, coupled with billions of miles of inputs from real drivers, helps us better understand the patterns to watch out for in the moments before a crash.

As our quarterly safety reports have shown, drivers using Autopilot register fewer accidents per mile than those driving without it. That’s because Autopilot is designed to reduce fatigue by helping drivers stay in their lane, while also ensuring that they keep their hands on the wheel. While lane-keeping and hands-on monitoring can be extremely effective at helping to reduce the likelihood of an accident when Autopilot is in use, we believe that these precautions can also be extremely effective for preventing accidents when Autopilot is not in use.

Lane Departure Avoidance lets a driver elect to have corrective steering applied in order to keep them in their intended lane. When the feature is in use and a driver is departing a lane without their turn signal on, the car will also check to see whether a driver’s hands are on the wheel. If a driver’s hands are not detected on the wheel, the driver will receive a series of hands-on reminders and alerts, similar to the ones that our cars provide to customers who use Autopilot. If a drivers’ hands are repeatedly not detected on the wheel when Traffic Aware Cruise Control is in use, their car will gradually slow down to 15 miles below the speed limit or below the car’s set speed, and turn its hazard lights on.

This feature can be turned on or off, and works at speeds between 25 and 90 mph. It is an extension of Lane Departure Warning, which already warns drivers through a steering wheel vibration if they begin to drift out of their lane without their turn signal engaged.

Emergency Lane Departure Avoidance is designed to steer a Tesla vehicle back into the driving lane if our system detects that it is departing its lane and there could be a collision, or if the car is close to the edge of the road. This feature will automatically be enabled at the beginning of every drive, but can be turned off for a single drive by going to the Autopilot Controls menu.

At Tesla, improving safety is our primary goal, even after a customer purchases their car. That’s why we’re introducing these features beginning today via a free over-the-air software update, starting with Model 3 owners and gradually expanding to all cars that were built after October 2016. This is just another way that we are helping to protect Tesla drivers and passengers, and others on the road, every day.