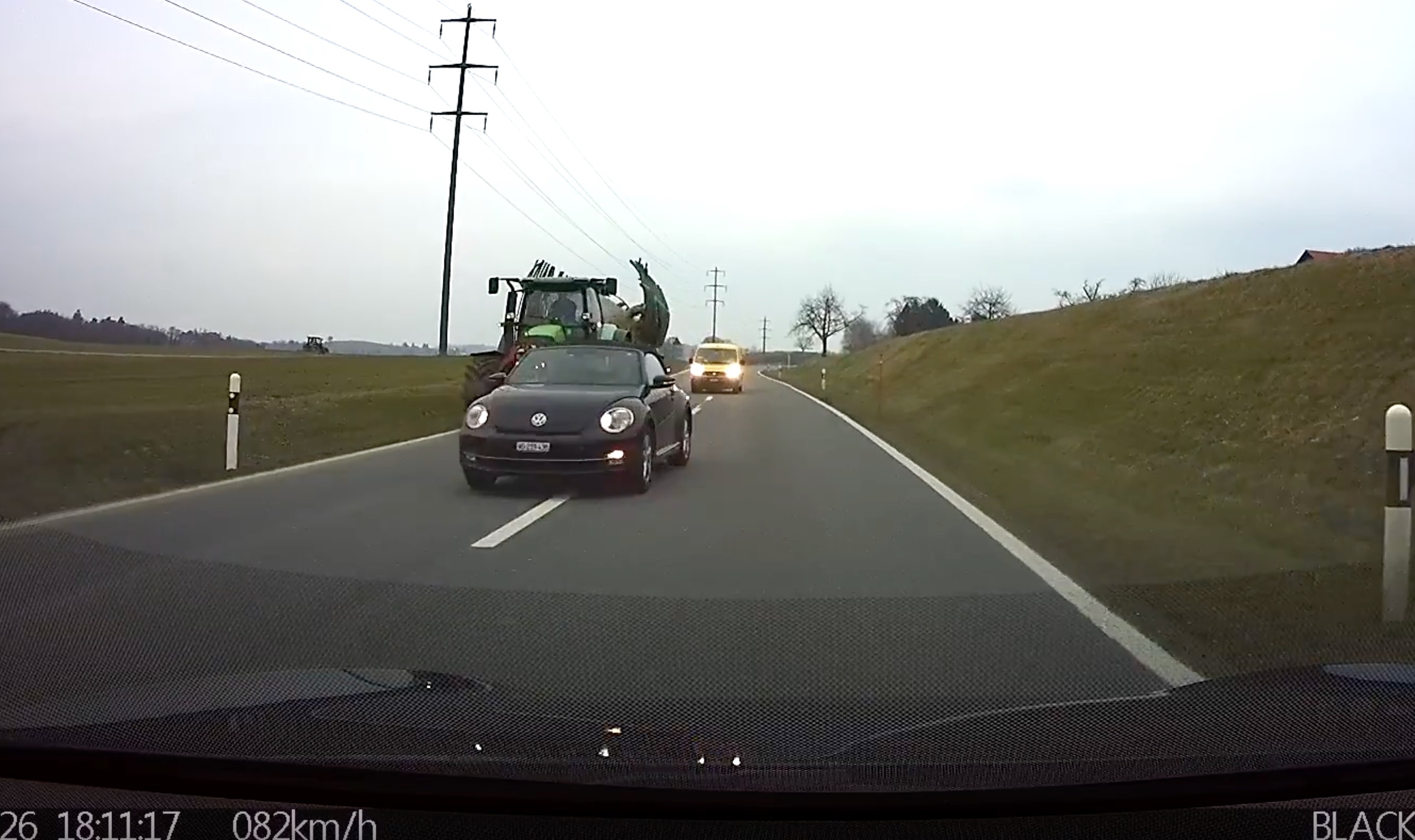 As Tesla’s latest Autopilot 2.0 update under version 8.1 (2018.10.4) continues to receive rave reviews from operators across the world, one Model S owner is thanking the company for its Forward Collision Avoidance feature after it saved them from a near head-on collision.

A Model S driver in Switzerland posted a video that shows a close-call situation after three cars in the opposite lane veered into their lane, in an attempt to overtake a slow-moving farm tractor. With the vehicle’s Autopilot system engaged at 50 mph (85 km/h), the driver under the Reddit username l10i recounts seeing a Ford Kuga driving directly at them while overtaking the tractor. The Ford was followed by two other vehicles that were also looking to also pass the farm vehicle. The second vehicle is seen coming in close proximity to l10i’s Model S, barely missing it as it quickly swerves back. The third vehicle, a van, doesn’t have enough room to overtake the tractor and retreats to their original lane.

“I saw the first car (Ford Kuga) beginning to overtake the tractor and said to myself « Okay, that’s ballsy. But it should be fine… if you hit the gas… come on! ». I chose to let Autopilot do its thing and was ready to take over, maybe planning to honk the Kuga when passing by if it was too close. That’s when I saw one more car and then a van starting to overtake the tractor with a hundred meters to spare, that was not gonna happen!” said the driver of the Model S.

However, l10i notes that Autopilot’s safety feature impressed not only because of its Forward Collision Warning system and its ability to detect the oncoming car – there have been countless videos posted by Tesla owners in the past, showing Autopilot saving them from an imminent collision – rather, it was the vehicle’s ability to detect the threat of oncoming danger well in advance that made it even more impressive.

According to the driver, Tesla’s suite of sensors including the vehicle’s forward facing cameras and radar were able to identify the Ford while it was turning into their lane and still 250-feet (75 meters) away, and sound a series of chimes and visual indicator to alert the driver of possible danger. “The AP was well aware of the Kuga being in MY lane at that distance! The radar alone can’t tell if the echo is on the correct lane (any normal oncoming traffic) or not. I find this latest update quite impressive indeed.” said l10i.

Tesla’s Owners Manual for Model S indicates that the vehicle’s cameras and sensors associated with Forward Collision Warning can monitor an area up to 525 feet (160 meters) in the vehicle’s driving path. Although Tesla vehicles equipped with the Collision Avoidance Assist system also features Automatic Emergency Braking, the company warns drivers to use appropriate caution when operating a vehicle and be prepared to take corrective action at all times. Only in situations where a frontal collision is considered unavoidable will Automatic Emergency Braking be applied, with the goal of reducing the severity of an impact. Another relatively unknown safety feature is Tesla’s “Active Hood” that’s designed to minimize injury from a collision with pedestrians.

Watch l10i’s video below and let us know what you think of the Tesla’s safety feature.