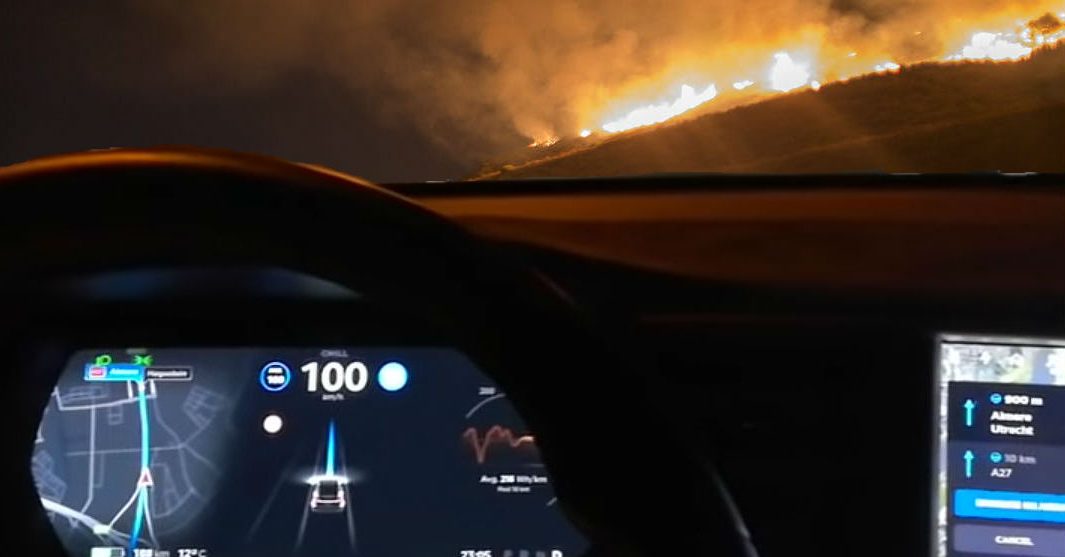 Tesla Model S and Model X owners affected by the ongoing wildfires in CA are thanking the electric car maker once more for their vehicles’ Bioweapon Defense Mode, which allows passengers to breathe clean air inside the cabin despite hazardous air conditions outside.

The state of CA is currently experiencing several blazes. In Southern CA alone, authorities from the Riverside County Sheriff’s Department have confirmed that the Sandalwood Fire in Calimesa has taken the lives of two individuals, an 89-year-old woman in a mobile home and another person that is yet to be identified.

The Sandalwood Fire, which has so far burned 820 acres and was at least 25% contained as of Saturday, is only one of several blazes in the state. The Saddleridge Fire, currently the largest in the state, has burned more than 7,500 acres and destroyed around 31 homes. Amidst these blazes, the South Coast Air Quality Management District has urged residents to protect themselves from heavy smoke and dangerous air conditions.

It is these dangerous air conditions that are being addressed by Tesla’s Bioweapon Defense Mode for the Model S and X, and some electric car owners have taken to social media to share their experiences with the feature. A Tesla Model X owner who goes by the handle @BLKMDL3 on Twitter, for one, mentioned that Bioweapon Defense Mode was a “lifesaver” as he and his passengers were traveling in Los Angeles.

“Thank you Elon Musk and Tesla for helping us with breathing issues during the fires today in Los Angeles due to bad air quality. Bioweapon defense mode is a life saver,” the Tesla owner wrote.

Fellow Tesla enthusiast and r/TeslaMotors subreddit member u/cherrycolasoda shared a similar experience that was briefly captured on film. The Tesla enthusiast mentioned that Bioweapon Defense Mode significantly helped with the air quality in the cabin as they passed through an area that was practically surrounded by fires. The vehicle’s Autopilot system reportedly functioned normally, following lane lines without any difficulties despite the conditions on the road.

These statements were met with a notable degree of skepticism and dismissal from critics, though Tesla later demonstrated Bioweapon Defense Mode’s capabilities by holding a test on a Model X. During the demonstration, the company placed the all-electric SUV inside a bubble contaminated with extreme levels of pollution (1,000 µg/m3 of PM2.5 vs. the EPA’s “good” air quality index limit of 12 µg/m3). Bioweapon Defense Mode effectively scrubbed the air inside the Model X’s cabin in 2 minutes, and over the next few minutes, the vehicle started cleaning the air around the SUV as well.

Watch u/cherrycolasoda‘s brief video of his drive through CA’s wildfires in below.

Bioweapon defense mode at its finest. from r/teslamotors