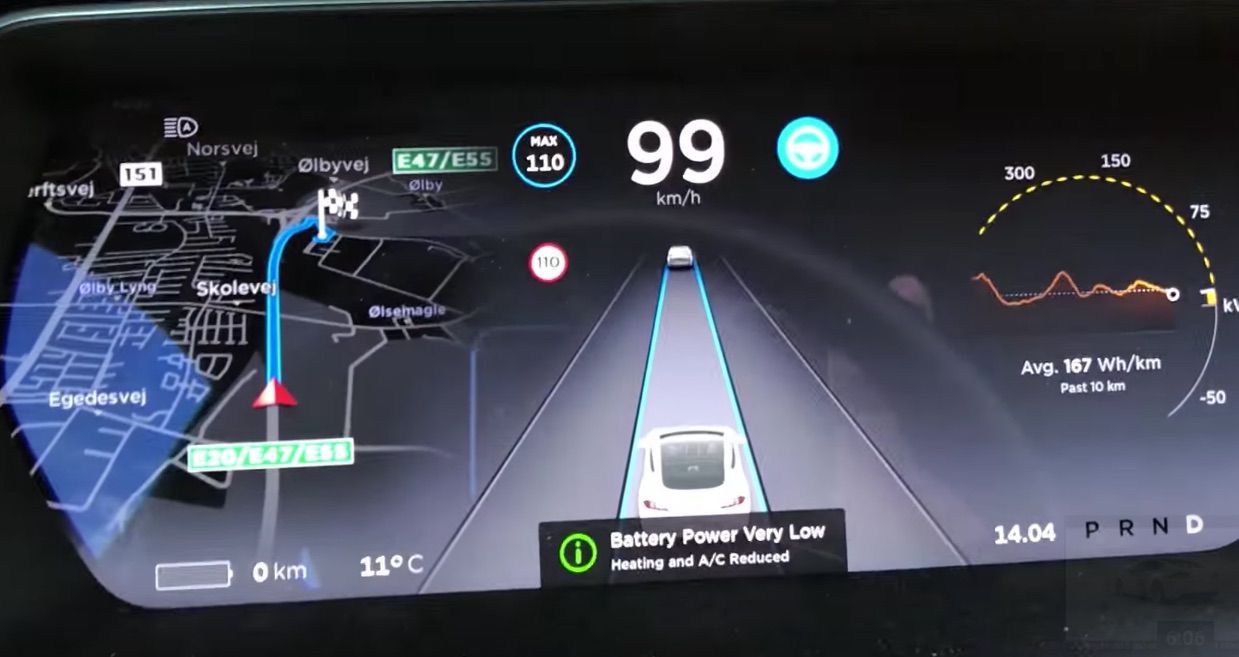 It’s been a couple of years since we first inadvertently discovered what happens when a Tesla runs completely out of battery range. Driving a standard rear wheel drive 85 kWh Model S running on Firmware 5.9 at the time, we quickly discovered that high winds and frequent elevation changes, combined with a lack of Supercharger availability, will lead to quite an exciting adventure. Luckily, Tesla baked in a generous helping of back up battery after range falls to zero.

With hundreds if not thousands of new improvements made to Model S hardware and software since the days of early pre-Autopilot S85 vehicles, one might argue that newer dual-motor variants using, also, an 85 kWh battery, could have more energy-robbing features. This would likely prompt Tesla to reduce the amount of battery reserve after the range indicator hits “0”, right?

A new video put together by MrFirelakeDK highlights the effects of a Model S 85D running on Tesla’s latest Version 8.0 software after the instrument cluster reads 0 kilometers remaining. “I made a deliberate ‘run-out-of-power’ test late October, 2016 to see what happens when you continue to drive when you have zero left on your dashboard – and of course to share this useful knowledge with all fellow Tesla enthusiasts.”, says the YouTuber.

We’ll include the results of the test below the video in order not to spoil the fun.

Not much different than what we experienced over two years ago. Tesla vehicles have a generous battery reserve after seemingly “running out of battery” when the range indicator hits “0”. Though one shouldn’t rely on this and charge responsibly, it’s nonetheless interesting to note that Tesla doesn’t want owners to be left stranded.