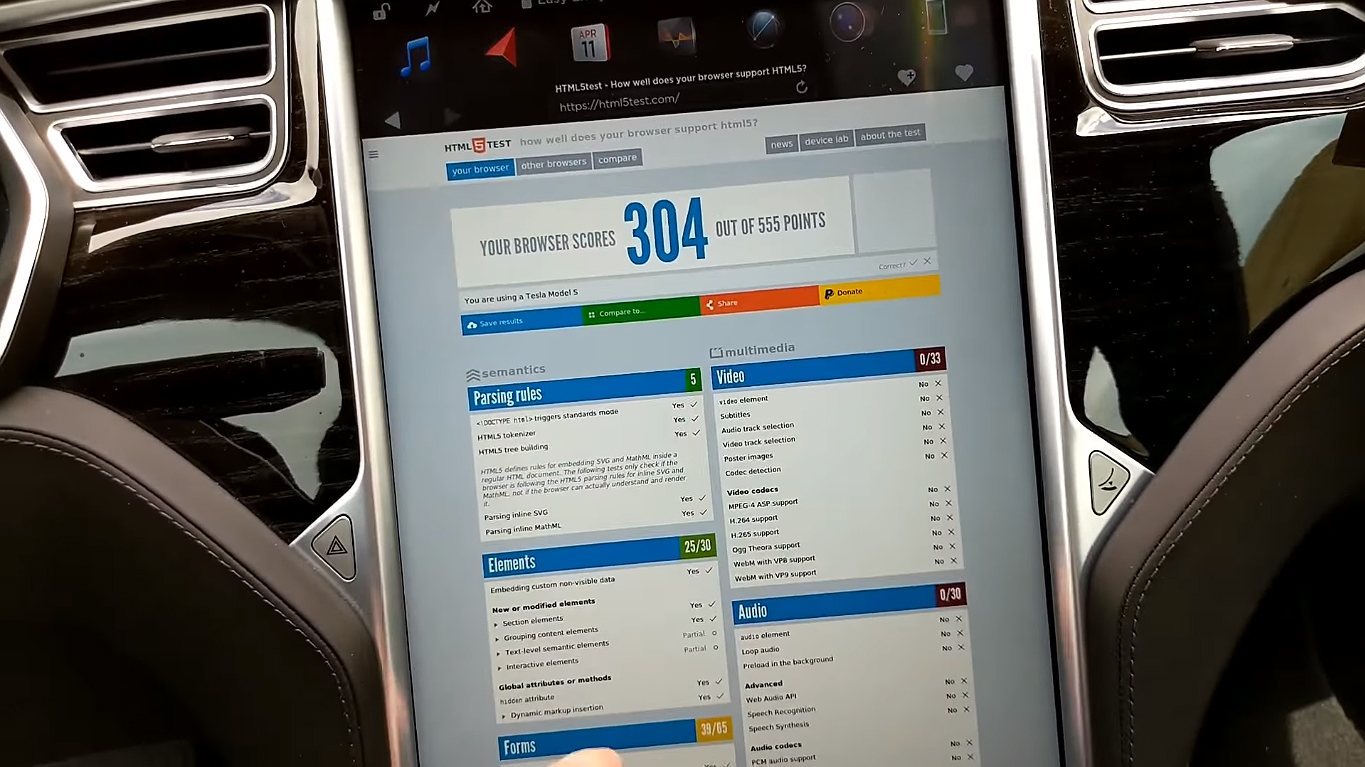 With the release of its latest update, v8.1 (2018.14), Tesla appears to have improved the internet browser of vehicles that are equipped with the company’s old NVIDIA Tegra-3-powered MCU.

A separate HTML5 test by Model S owner Eddie Daniels rendered similar results, with the car’s net explorer getting 304 points with one bar of LTE. Todd Sullivan, another Model S owner, further noted that before the update, speed tests on his Tesla’s internet browser averaged around 300-500 kbps. After updating to v8.1 (2018.14), however, similar tests have shown speeds that are in the 5+ Mbps range. Todd also mentioned that the new update fixed some errors in his car’s capability to stream podcasts.

Since the introduction of its new x86_64-powered MCUs, Tesla has been rolling out updates and improvements to vehicles equipped with old media control units. Last month, Elon Musk confirmed via Twitter that while retrofitting older Model S and Model X vehicles with new MCUs will be possible, the company will be releasing software updates that would significantly make the performance of the Tegra-3-powered units much better. According to Musk, the upcoming software updates would accelerate the rendering capabilities of old MCUs, which would make a big difference in the performance of the units.

Just a couple of days after Musk’s tweet, reports from Tesla owners emerged stating that the company is rolling out a firmware update that makes old MCUs much more responsive to use. A video of this was shared to Teslarati by a Model S owner in Taiwan, and based on the clip that was shared to us; the update makes the old MCU’s rendering and responsiveness almost comparable to the company’s new media control units.

If any, Tesla’s recently improved browser stands as yet another promise fulfilled by Elon Musk. Back in December, Musk responded to a Tesla owner on Twitter who complained about the net explorer’s speed, who dubbed the feature as “unusable.” Replying to the Model S owner, Musk admitted that the car’s web explorer was indeed “terrible,” before stating that “major upgrades” to the web explorer will be coming to Tesla’s fleet in a few months.

“Yeah, it’s terrible. Had to upgrade old Linux OS and a bunch of drivers first. Major browser upgrades coming to all cars in a few months. Note, will be slower at first until code is optimized,” Musk wrote.

Watch Tesla’s improved internet browser for vehicles with older MCUs in the videos below.