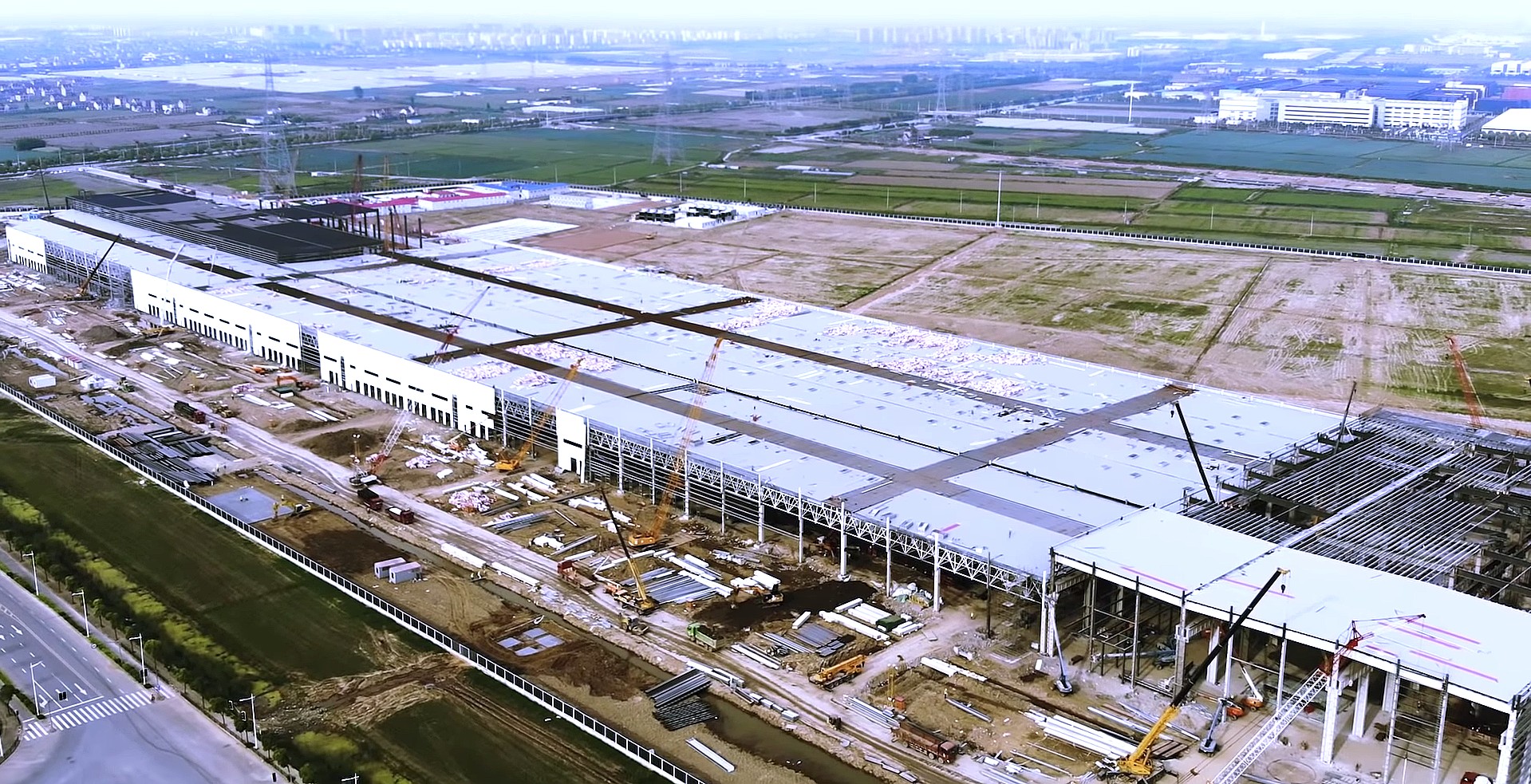 To say that the buildout of Tesla’s Gigafactory 3 in China is fast is a gross understatement. Within a few months, Tesla’s 864,885-square meter lot in Shanghai’s Lingang Industrial Area has been transformed from a large, muddy field into a site where a massive electric car factory is taking shape. Every update of Gigafactory 3 shows the facility making visible progress. This week alone, footage from the site revealed that workers have practically completed the roof of Tesla’s general assembly building, and walls are already being set built.

Back in March, Shanghai official Chen Mingbo stated that the initial buildout of the factory should be completed by May. Considering the speed of the facility’s construction, this insane timeframe seems to be on track. If this target is accomplished, Tesla could start Model 3 trial production as early as September. That’s significantly ahead of Elon Musk’s own estimates, which pointed to initial production starting near the end of 2019. Reports from China also indicate that Gigafactory 3 could set a record for fastest factory buildout in the country.

The original timeline for Gigafactory 3 was actually far more conservative, with Tesla noting that it expected vehicle manufacturing to start roughly two years after construction begins. The timeframe, which was classic Elon Musk in the way that it is optimistic and ambitious, faced relentless skepticism in the United States. Consumer Edge Research senior auto analyst James Albertine, in a segment of Bloomberg Markets, flat-out stated that Tesla’s targets for Gigafactory 3’s construction were simply “not feasible.”

The reaction to Gigafactory 3’s initial timetable is quite reflective of the amount of skepticism and criticism thrown at Tesla and Elon Musk on a rather consistent basis. In the United States, Musk pretty much faces opposition at every turn. It is not uncommon to see reports about Tesla having a negative slant. People betting on Tesla’s failure such as short-sellers consistently accuse Musk of being a fraud as well, while mocking him on social media platforms such as Twitter for his alleged shortcomings. One particularly passionate short-seller actually received a restraining order after allegedly trespassing, harassing, and causing harm to Tesla employees.

With the drama surrounding Tesla, it is no wonder that Elon Musk wanted to take the company private last year. When Musk pitched the idea to investors, he argued that it would be a lot easier for Tesla to pursue its goals if it could operate without the short-term pressures of Wall St and the constant barrage of noise from critics that stand to receive financial gain if the electric car maker were to fall. The take-private attempt ultimately fell through after Elon Musk backed out of a ~$30 billion deal from investors that included Volkswagen AG. In the Q1 2019 earnings call, the CEO noted that a non-public Tesla will not be happening anytime soon. “Unfortunately, that ship had sailed,” Musk said.

It could be said that the nearly unbelievable pace of Gigafactory 3’s construction is what happens when Elon Musk’s ambitious vision is embraced without noise or unnecessary drama. There were no controversies among China’s workforce when Elon Musk noted that he expects electric car production to begin by the end of the year. Instead, the company’s construction partner took the CEO’s ambitious timeframe seriously and did what was necessary to build Gigafactory 3 as quickly as possible, including adopting 24/7 work. Going a step further, the country even pursued a target completion date that exceeds Elon Musk’s already ambitious timeframe. Today, Model 3 trial production is expected to start as early as September.

If there is a lesson that can be learned from Gigafactory 3, it is that visionaries such as Elon Musk could accomplish great things if their targets are supported and taken seriously. This is something that China seems to be all too willing to give Elon Musk, as could be seen when he met with Chinese Premier Li Keqiang in Beijing last January. During his meeting with Li, Musk acted like his usual self, throwing out grand ideas about Gigafactory 3 and mentioning his vision of creating a facility that acts almost like a “living being.” Li proved quite open to Musk’s ideas, even offering the CEO a ‘Chinese Green Card’ so he could openly pursue his plans in the country.

Demonstrating this point, here’s the Gigafactory 3 site in early March.