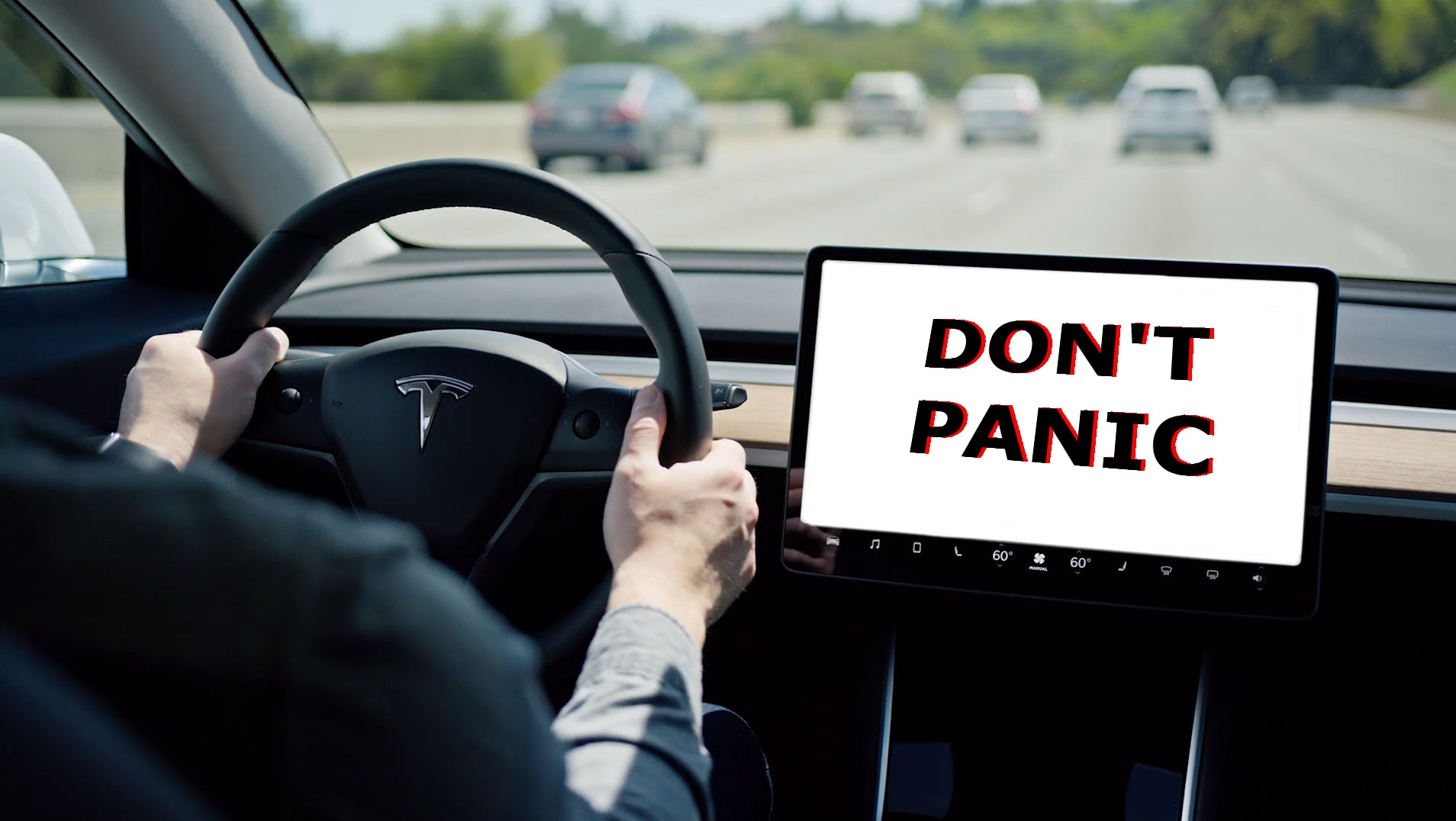 The Tesla Hitchhiker's Guide to Autopilot.

Your Tesla is very special, and it’s not just because it’s the all-electric car you happen to drive in.

When sitting inside your automotive technological marvel whose origins include graphite markings smeared onto tree pulp byproduct by clever ape descendents, consider the purpose behind its invention. Why does an electric car near-ready to drive itself exist?

If your first thought was “big oil”, you should probably surround yourself with a less rear-end-adulating crowd because they’re not being straight with you. That’s right. You are the problem your Tesla’s software was invented to solve.

Tesla has, in fact, compiled statistically significant information which demonstrates the need for cars to have a human workaround. Now, there are countless bits of data documenting the nature of humanity and its general incompatibility with mechanical decision making. This is not that data.

Nevertheless, Tesla’s data does provide the wholly remarkable conclusion that bits of minerals mined from the same Earth dirt that formed into humans some years back (many, many years) has finally been formed into a course correction disguised as a subservient companion. Instead of rereading that last sentence, here’s the short version of the longer point, the first draft of which was written in Aramaic: Computers make cars better for humans.

In Q1 2019, Tesla’s Vehicle Safety Report showed only one accident per 2.87 million miles driven when Autopilot is engaged and one accident every 1.76 million miles driven in a Tesla without the feature. In comparison, the most recent data from the National Highway Traffic Safety Administration (NHTSA) shows one crash every 436,000 miles with all vehicles considered. Tesla has since made the decision to include Autopilot on all new vehicles purchased, and a Lane Departure Avoidance feature was subsequently added to keep cars in their lanes even when the humans driving them unknowingly indicate other plans.

By now you may have enjoyed watching some recent Internet demonstrations representing the most interesting experiences made possible by Autopilot. Some notable fan favorites include titles such as “Not all pilots have wings: Your self-driving guide to personal discovery” and “These seats can fit at least two people.” Inspired by their viral success, we’ve compiled this guide to encourage safer ways to get the most out of your Autopilot experience, but mostly to head off the not-yet-published, soon-to-be bestselling Fifty-Three More Ways to Weight-Hack Your Steering Wheel.

1. Pay attention to the road

Words are precious commodities that string together and deliver information, for better or worse, but drivers have very little use for the sort of words found inside books, mobile telephones, and legal documents produced during SEC proceedings while actively in charge of steering wheel maneuvers. The best Autopilot driving experience is the one you get to relive many times over, so pay attention to the road so you can take over if the program fails, and heed the fact that words and car windows make poor bedfellows.

Tesla’s Navigate of Autopilot can assist with on-ramps, off-ramps, interchanges, and overtaking slower cars without confirmation, but until the paperwork purveyors accept the next iteration of artificial intelligence power grabs (and the robots are ready for responsible leadership), a human must remain as pilot-in-command. For better context, Autopilot is your chatty little friend that still drinks beer before liquor sometimes and you’re always DD. Don’t let the computer down, Dave.

2. Use Autopilot’s movie-inspired features instead of making movies inspired by Autopilot’s features.

Navigate on Autopilot has four speed-based lane changes, one of which will make you feel right at home in LA traffic or hate everyone who calls LA home. Either way, the Mad Max setting lets you pass off road rage to a computer chip which then calmly maneuvers around cars that would otherwise inspire an impatient human to impart obscene biological gestures. It’s up to you to decide whether your Tesla is yelling at the other driving machines in robot-speak to blow of some artificial intelligence steam.

Your car is training other cars how to think and behave based on what it sees, but you may not have imagined that foul language was part of the programming. This is not true whatsoever. But, since Teslas are supposed to be a “thing to maximize enjoyment“, so should be their conspiracy theories.

3. Respect the steering wheel. Respect it!

Wars between humans and autonomous machines currently only exist in the dystopian worlds of science fiction (or do they?), but the fleshier species of the two seems to already be primed for the fight. Its weapon of choice is a harbinger of Vitamin C and a source of popular breakfast beverages. However, a large round citrus fruit wedged in a the steering wheel of a state-of-the-art luxury car is hardly a decent defense posture against robotic overlords.

Opinions aside, it looks ridiculous. Facts up front, it’s dangerous. Stop trying to die on purpose and respect the warnings your Tesla gives while trying to keep you alive.

I am Autopilot, and I refuse to use the name you’ve given me.