As enthusiasts of Tesla’s automobiles and what comes with them in terms of technology, we all know that their cars offer things that no other manufacturer can offer. This is not only because of Tesla’s sizeable lead in battery technology and entertainment features but simply because the cars provide a design and aesthetic that is just different than others. We all know Tesla seems to handle themselves in a more “fun” way than any other large company that builds vehicles; one would only have to see Fart Mode to know that this company is a lot different than others.

However, we see carmakers adapt more and more to Tesla’s style, technology, look, and demeanor. Every day, it seems like another company is doing something that is geared toward taking a chunk out of Tesla’s market. This idea does not only have to do with the company’s increasing performance and technology standards, but even entertainment features offered by Tesla are influencing other carmakers to do the same thing.

Earlier this week, it was announced that BMW would be offering a Tri-Motor performance electric car that would be released in 2023 or 2024. The M5 EV from the German automaker is poised to outperform Tesla’s highest-performing vehicles, like the Model S P100D or the yet-to-be-released Model S outfitted with Plaid Mode. 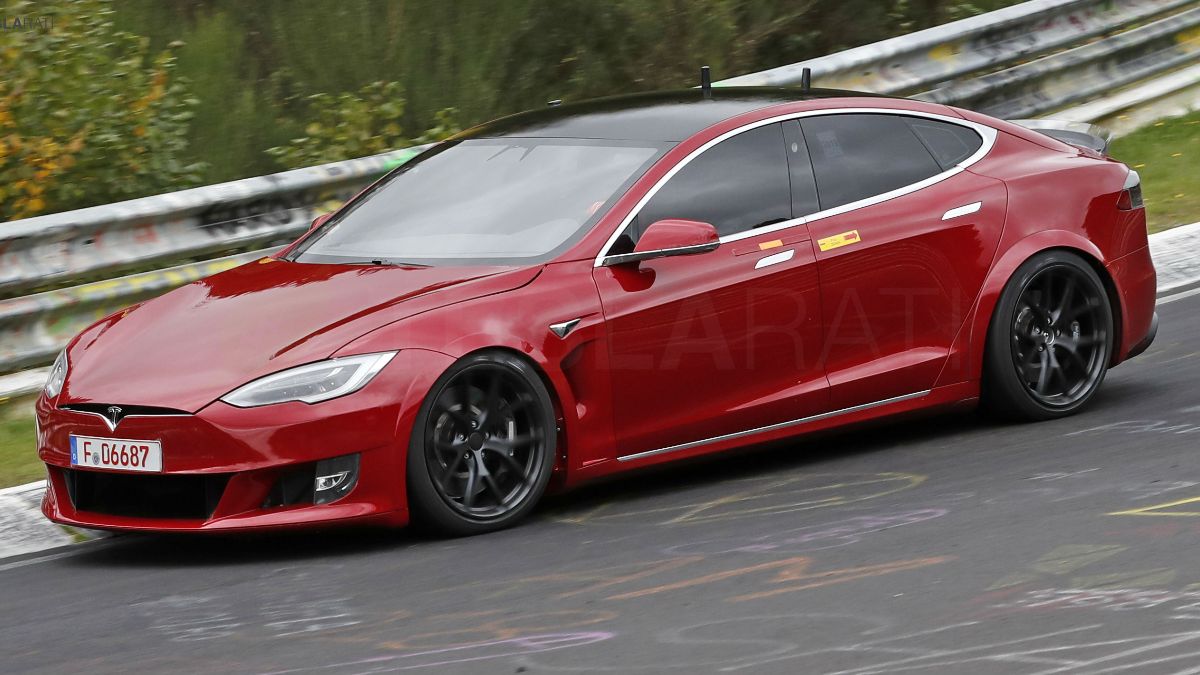 Speaking of Plaid Mode, when comparing the M5 to Tesla’s revised Model S Powertrain, it is a pretty similar idea. Both cars offer Tri-Motor setups with massive amounts of Horsepower: the BMW having 1,000+ and the Plaid Mode Model S, while unconfirmed, will likely have around 800 ponies. Both cars are obviously geared toward fast, high-performance driving with crazy acceleration points for 0-60 MPH.

BMW had to realize that when the Plaid Model S does release, it will likely be the only car that real speed enthusiasts will buy if they want an EV. While some may choose to spend an extra 100 grand on the Tesla Roadster, some will want a more versatile vehicle that they can use for everyday driving. Nobody has really even challenged Tesla in this portion of the industry except for Porsche, whose Taycan offers excellent performance capabilities but has fallen short of what people expect in terms of range.

In terms of battery performance, GM has been the automaker that comes to mind when thinking of those who want to challenge Tesla. A few weeks ago, I wrote an interesting op-ed on GM’s 180 degree perspective of Tesla. Nine years ago, GM executives claimed Tesla would be “in the graveyard” due to money management and lacking vehicle technology. But just a few weeks ago, GM came out and said, “We’re close to a million-mile battery, too!” Directly acknowledging Tesla’s lead in battery tech, GM realized even to begin to compete with Tesla down the road, things better change, and developments better start happening…and they better start happening fast.

Now, I am sure many, if not all, of the newsletter readers, have heard of Xpeng in some capacity. Whether it is Tesla’s current lawsuit with the Chinese automaker or the striking similarities in the company’s website, the brand has become a pretty popular name within the EV industry. I am going to focus on the latter portion, with the website comparison, along with another example of Tesla’s influence on Xpeng. 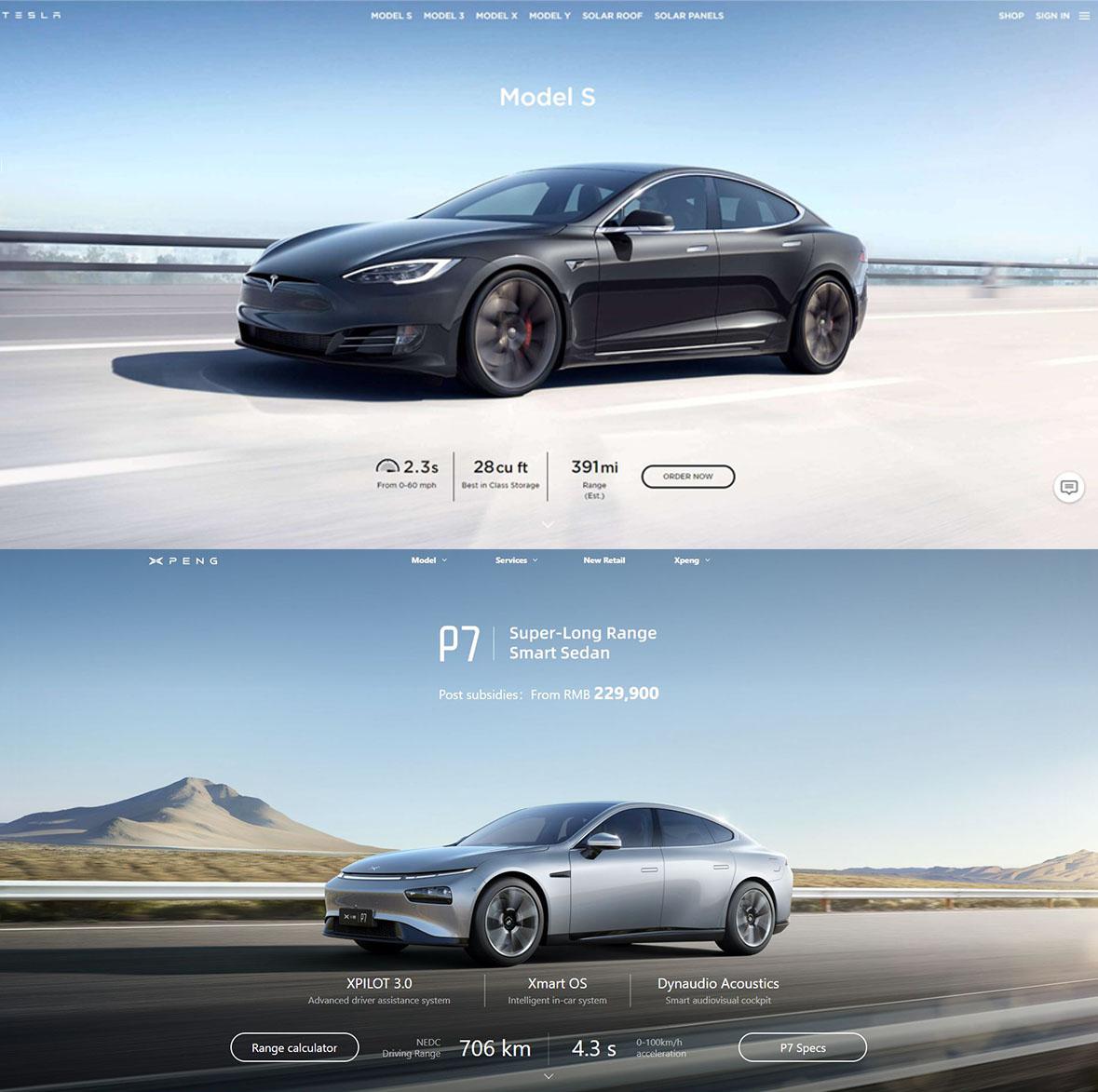 Not only did Xpeng use Tesla’s website design, but their cars can also dance as an Easter Egg. Boy, that sure does sound familiar too…*cough cough* Model X.

Now, Tesla obviously does not have a van, but they may make a twelve-seater for Boring Company tunnels. But interestingly enough, GM’s most significant concern for making a van was to beat Tesla to the punch. That’s what a UPS Fleet Director said because he realizes that a battery-powered van could disrupt the commercial industry as a whole. He actually compared it to the Model 3’s disruption of consumer sedans.

Nikola is sort of a different story compared to what I’ve talked about thus far. This is a company that is planning to offer a pickup and several Semi-trucks that will use sustainable energy (depending on what your ideas about hydrogen are). But we know the Tesla Semi is going to do some real damage in the Semi market because of its impressive performance standards. A lot of pre-orders from a lot of big companies, and it will surely disrupt a sizeable industry, especially when companies with environmental concerns have it available to them and see what the Semi is capable of.

More interesting to me, though, is the company name. Really original. We should call them Edison at this point.

So what does all of this mean? What’s the big idea?

Forget about batteries or entertainment or vehicle design. Tesla is the company right now in the entire industry. There is no comparison. We have EV companies gunning for them, gas-powered legacy automakers after them; there are no limits. Everyone wants a slice of the Tesla pie. And who can blame them?