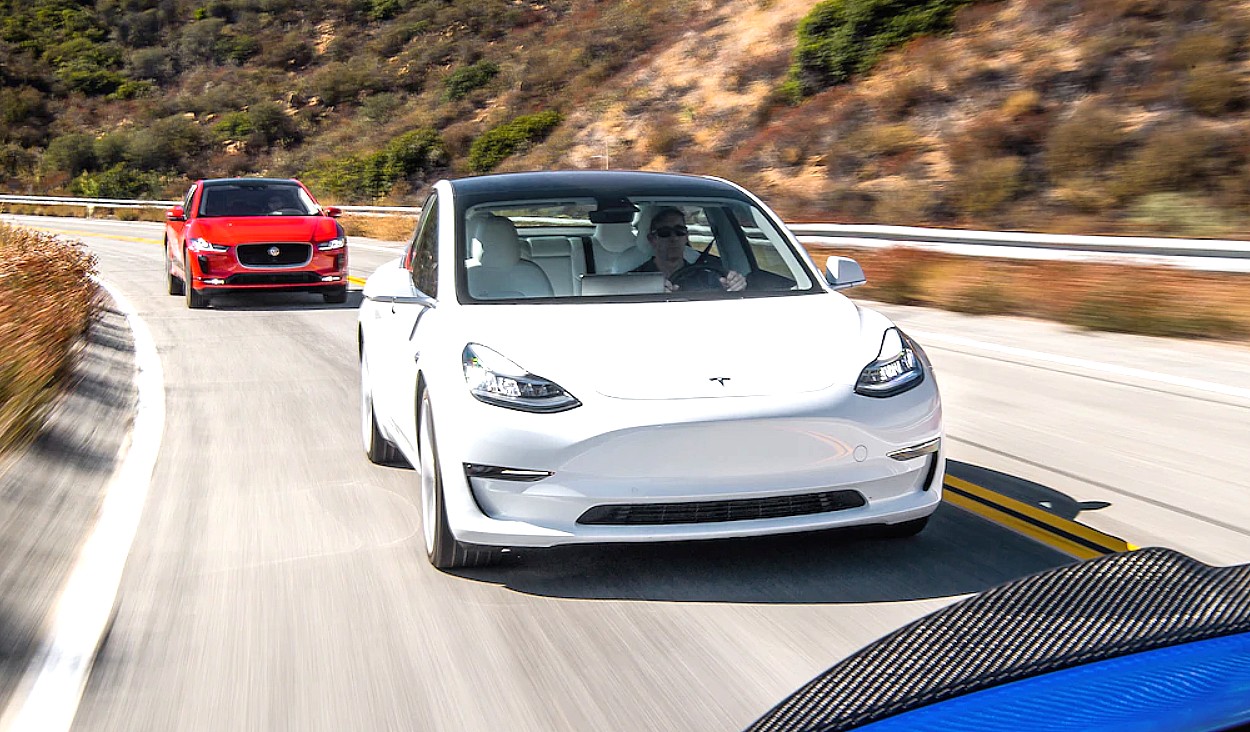 ‘Tesla Killers’ are struggling to live up to their names

The Tesla Model 3 and the Jaguar I-PACE EV400 get track-tested. (Photo: MotorTrend)

Given the struggles faced by most new electric vehicle (EV) releases over the last few years, it may be time to put away the phrase ‘Tesla Killer’ in favor of a more realistic label like ‘Tesla Kind-of Competitor.’ With brands like Faraday Future and Fisker Inc. already come and (almost) gone in the same EV arena that Tesla continues to thrive in, each new entrant looks to be the next at-risk for being an ‘also-ran’ in the quest for success in the consumer market.

As more tech knowledge is gained, supply deals are made, and Tesla continues educating potential buyers about the positive realities of electric car ownership, perhaps the ‘Tesla Killer’ label will be bandied about again. In the meantime, however, competitors like the Jaguar I-PACE and the Audi e-tron are left with the cold, hard reality: They’re just not Tesla, and that’s not yet a good thing for shoppers to be thinking about their product right now.

“If a customer is choosing the I-PACE over the comparable Tesla, they are making the conscious decision: I don’t want the Tesla,” said Ed Kim, an analyst at the car-market research and consulting firm AutoPacific, as quoted in an article on Bloomberg about Tesla’s struggling competition. “You really have to be someone who doesn’t like Tesla, who doesn’t want the Tesla product, in order to go for this.”

The e-tron and the I-PACE might actually stand a good chance at breaking into a market dominated by Tesla given their brands’ experience and financial resources in the automotive world already. As Bloomberg’s article pointed out, their sales numbers are going to have to perk up soon, though, and given some advertising tactics taken up by both brands, they’re aware of this need. Jaguar is currently offering a $3,000 ‘Tesla Conquest’ incentive, meaning current Tesla owners buying an I-PACE will receive an additional $3,000 credit towards their purchase as part of a combined $15,000 savings package program. Last month, Audi infamously decided to block Superchargers in order to spark marketing-driven conversations with Tesla owners there to ‘fill’ up.

There are a variety of reasons why ‘Tesla Killers’ aren’t living up to their name – some are speculation and some have pretty solid facts to support their case. Getting a late start in the EV game is probably the most glaring shortcoming of Tesla’s competitors, but that’s not always the determining factor. Although Tesla is lauded as a technology company that also makes cars, a sentiment expressed to applaud their achievements, there’s no rule saying they will keep that crown forever. (My source: Pirates of Silicon Valley meets Tesla Goes to China). With the kind of deep pockets legacy auto still has, they could throw their money around and make some magic happen there, if you will.

Education of the sales force seems to be a serious shortcoming as well, especially according to owners who’ve experienced it directly. In early July this year, one Jaguar I-PACE owner shared a very frustrating tale with Teslarati which involved his car failing to meet its stated battery range by a significant amount, a lack of working charge stations, and delays in servicing due to limited know-how when it came to the company’s new electric vehicle. Tesla is often chided for its growing pains in service, but legacy auto doesn’t always have a pristine record, and Tesla is always working to improve and can move at an incredible speed to do so.

Then there are theories put forth by people like Sandy Munro, a teardown specialist who has made waves in the Tesla community for his comments about the Model 3 manufacturing process. Commenting on the underwhelming battery range from Tesla competitors such as the Audi e-tron and the Jaguar I-PACE in an interview with Sean Mitchell of AllThingsEV, Munro noted that this is simply because of their lack of vertical integration. “(It’s) because they’re buying them from somebody else,” he mused. Other comments made in the interview involved the long-term nature of any battery development outside of Tesla and the major battery manufacturers thanks to patents and licensing requirements. In other words, Jaguar and Audi might not be victims of ‘you snooze, you loose,’ per se, but rather ‘you don’t stay awake, you pay.’

To the extent that it’s amusing watching Tesla move so far ahead in the EV race, it’s not a terrible thing if they end of sharing the stage a bit with others down the road. Elon Musk has noted on several occasions that Tesla alone can’t achieve the total transformation that’s needed to achieve his sustainability goals. It’s good that others are trying, and a handful of actual ‘Tesla Killers’ that keep the brand on its toes is good for everyone, even those just in it for the cool factor. Better competition for Tesla means Tesla just gets better. Then they get better to keep up. And so it goes.

‘Tesla Killers’ are struggling to live up to their names