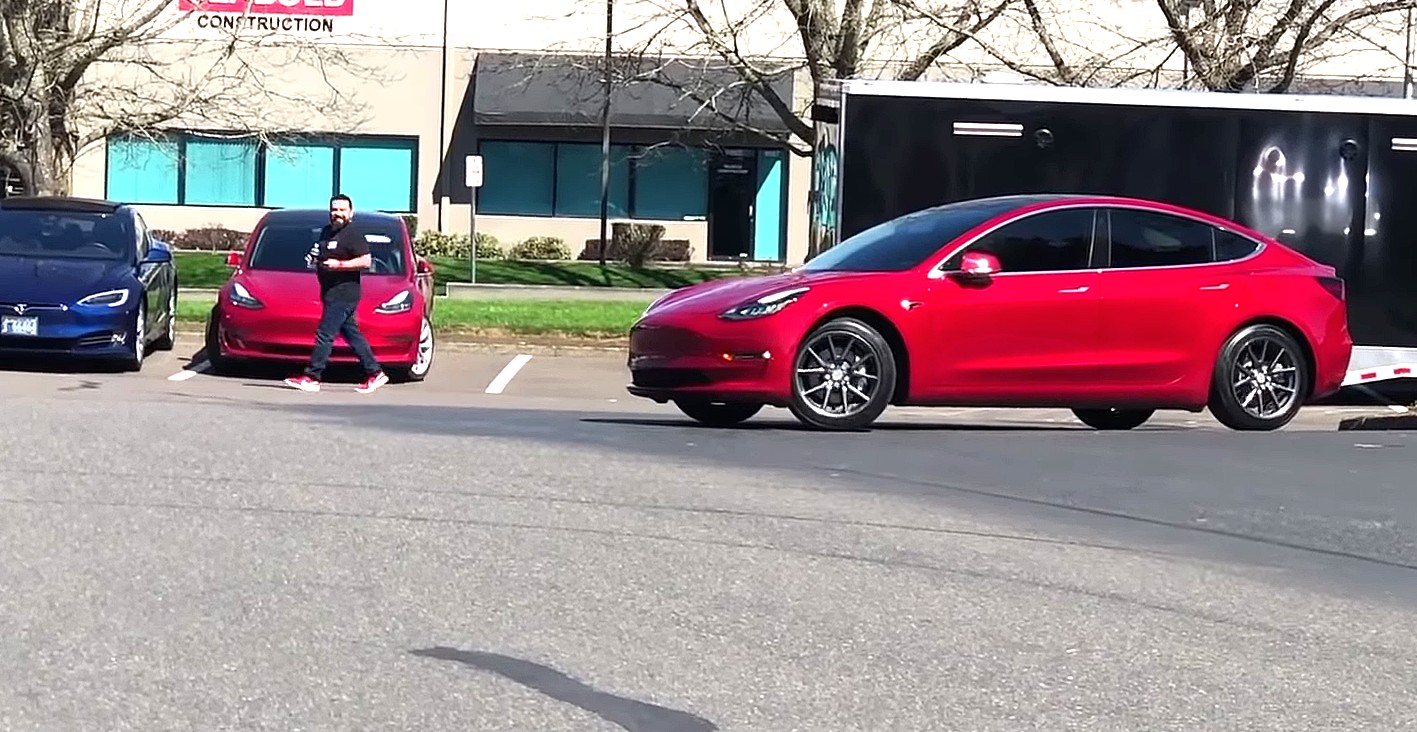 A group of Tesla owners was recently graced with a demo of what could very well be an upcoming improvement for Summon that has been hinted at by Elon Musk in the past. In the short demonstration, a Tesla Model 3 was shown following its operator around a parking lot like a pet, despite its operator changing locations multiple times.

A footage of the demo was recently shared on YouTube by Tesla owner Melinda VerMeer of the Portland Tesla Owners Club. The demo started off like other footage of Enhanced Summon, with the Model 3 taking itself out of a parking spot. After this, the vehicle headed to the location of its operator, who proceeded to move from one spot in the parking lot to the other. Impressively, the electric sedan performed necessary adjustments while it was being Summoned; backing up, avoiding a curb, and making rather complicated driving maneuvers on its own to “follow” its operator.

Seeing the feature in action, it is difficult to not relate the demo to Elon Musk’s mention of Summon improvements that will allow owners to walk their vehicles “like a pet.” Musk mentioned the feature on Twitter back in October. “Car will drive to your phone location & follow you like a pet if you hold down Summon button on Tesla app,” Musk wrote.

What is rather interesting about the recently captured footage is that the Model 3 seemed to react quickly whenever its operator moved around. Save for a strange maneuver that saw the Model 3 drive in reverse for a considerable distance to reach its operator, the improved Summon feature already seems quite refined and nearly ready for release.

Elon Musk mentioned a number of improvements for Summon when he posted about the feature last year. Apart from giving electric car owners the capability to walk their vehicles like a pet, Musk also mentioned a “remote control mode” that will allow drivers to operate their vehicles like a giant RC car. Perhaps a demo of “remote control mode” would come soon after? One can hope.

The present iteration of Summon uses the electric cars’ Autopilot cameras instead of the ultrasonic sensors that were utilized in the feature’s initial iterations. This strategy follows Elon Musk’s stance on full self-driving technologies, which suggests that artificial intelligence and cameras could be used as a primary means to navigate. Using this system, Musk noted that in the near future, a Tesla electric car “should be able to drive around a parking lot, find an empty spot, read signs to confirm it’s valid & park.”

Tesla is currently starting the rollout of Enhanced Summon to the first batch of owners. The feature is being introduced together with no-stalk confirmation Navigate on Autopilot, which is currently listed by Tesla as part of its full self-driving suite. A wide release for Enhanced Summon and no-confirmation Navigate on Autopilot will likely transpire within the coming weeks, after the company addresses bugs and other issues that are reported by the first batch of owners who received the new features.

Watch the brief demo of Tesla’s advanced Summon in the video below.