Tesla has opened its Model 3 configurator for the Chinese market, allowing potential buyers of the electric sedan to design their vehicles. As could be seen in Tesla’s Chinese website, the company is only offering two variants of the Model 3 in China for now — the Long Range AWD and the Performance version. The Mid Range Model 3 RWD, the vehicle’s most affordable variant available today, is currently unavailable in the country.

The Model 3 configurator in China reflects the vehicle’s updated prices, which were rolled out after the Chinese State Council Customs Tariff Commission announced last month that it was suspending the extra 25% tariffs it placed on cars and parts being imported from the United States. With these adjustments in place, the Model 3 Performance, which was initially announced with a price of 689,000 RMB (roughly $100,000), was adjusted to 560,000 RMB (around $81,000). The Long Range AWD variant, initially listed with a price of 580,000 RMB (around $84,000), was reduced to 499,000 RMB (roughly $72,600). 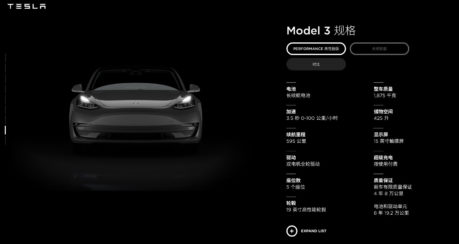 White seats are currently priced at 9,300 RMB (~$1,300), while paint options such as “China Red” multicoat are priced at 23,100 RMB (~$3,300). In the case of the Model 3 Performance, the Chinese version of the electric vehicle is also equipped with 19″ “Power Wheels,” which feature a design that combines “balanced performance and cruising range.” Enhanced Autopilot is priced at 46,300 RMB (~$6,700) as well, though the company notes that purchasing the driver-assist system after taking delivery would raise its price to 65,000 RMB (~$9,400). The electric car maker also included a reminder about Autopilot’s upcoming features, stating that “the specific functions and specific time of the push will depend on the relevant laws, regulations, and rules of the People’s Republic of China.”

Tesla’s Model 3 page in China notes that first deliveries for the vehicle are expected to begin sometime in March 2019. The company’s Chinese website further teased that the upcoming Standard Range version of the Model 3 would be available sometime in mid-2019. This is quite in line with Tesla’s timeframe for the Standard Range Model 3 in its US configurator, which estimates the electric car’s availability within 3-4 months.

Chinese reservation holders who order the vehicle could pick up the Model 3 in select locations across the country. So far, Tesla’s website in China lists 14 pick-up locations, from Beijing to Wuhan. The company adds that if a vehicle is purchased without a test drive, buyers can return the electric car within three days of purchase for a refund.

With the Model 3 now saturating North America, Tesla is gearing up to bring the electric car to the international market. That said, even before the Model 3 configurator was opened to the public, Tesla was already making the vehicle attractive to potential buyers in China. The Model 3 Performance’s 560,000 RMB price, for one, massively undercuts the price of fossil fuel-powered rivals such as the BMW M3 and the Mercedes-AMG C 63 Coupe, which cost as much as 998,000 RMB ($162,000) and 1,198,000 RMB ($173,623), respectively. With its superior acceleration, zero emissions, features such as Enhanced Autopilot, and free over-the-air updates, Tesla has all but made the Model 3’s top-tier variant a bang-for-your-buck vehicle in the Asian country.

The start of Model 3 deliveries in China is but the tip of the iceberg for the electric car maker, as Tesla is also constructing Gigafactory 3 in Shanghai. The facility is expected to produce both battery packs and electric vehicles like the Model 3 and the Model Y. Estimates note that Gigafactory 3 would likely commence the production of electric cars sometime in the second half of 2019.